Cinema Only Entertains; But Does Not Educate the Masses

Cinema Only Entertains; But Does Not Educate the Masses

Cinema is one of the major upcoming entertainments in this global village. There are prodigious numbers of films released worldwide every year. It was in those days that cinema both entertained and educated the masses; but in these days it is only just meant for entertainment and it does not teach moral values to the people.

There is no doubt that cinema from Hollywood to Kollywood entertains the masses; but it does not educate them.

Turn in your highest-quality paper
Get a qualified writer to help you with
“ Cinema Only Entertains; But Does Not Educate the Masses ”
Get high-quality paper
NEW! AI matching with writer

Today, people do not like taking advices and films based on giving pieces of advices to the audience fails miserably. Hence, the director whose sole aim is to gain a profit from these films gives all such kind of non-sense in order to gain peoples interest and money.

Certain planned murders are based on the small pieces of advices that are given by the director in such films. Some thrillers bring to the notice of the audience, the latest equipments and devices brought into the market which can be used for criminal purposes.

Today’s films can be broadly classified into two (1): films for the teenagers (2): films for the children. A film for teens often consists of love, friendship and thrilling action; which most probably do not occur in real life. These sorts of films often suggest that family and relations can be regretted for the sake of love. This can generally be right for that moment; but this relationship disappears as life progresses and time passes.

Finally, the couple would be proven wrong by their piece of judgment which was actually taken from a suggestion in those films.

Secondly it is the films for the children. These types of films generally consist of unreal and imaginative things that there has been no record of it over the years. It would be greatly based of a superhero with super powers, which after a long unending struggle defeats the atrocious villain. There have been cases of young children, losing their lives in the attempt to fly like their super hero’s. And things of this kind do not educate the children in any manner; but films like these are the one’s that receive a golden profit and high comments. Hence, directors continue their hunt for more and more imaginative stories. They then shape them out into a brilliant film which would ear him credit.

Hence, therefore I do not at all, for heaven’s sake agree to the fact that cinema educates the masses and all it is worth of is to induce people with stupid ideas, silly characters, unreal things, criminal plans, etc.

Cinema Only Entertains; But Does Not Educate the Masses. (2016, Apr 15). Retrieved from https://studymoose.com/cinema-only-entertains-but-does-not-educate-the-masses-essay 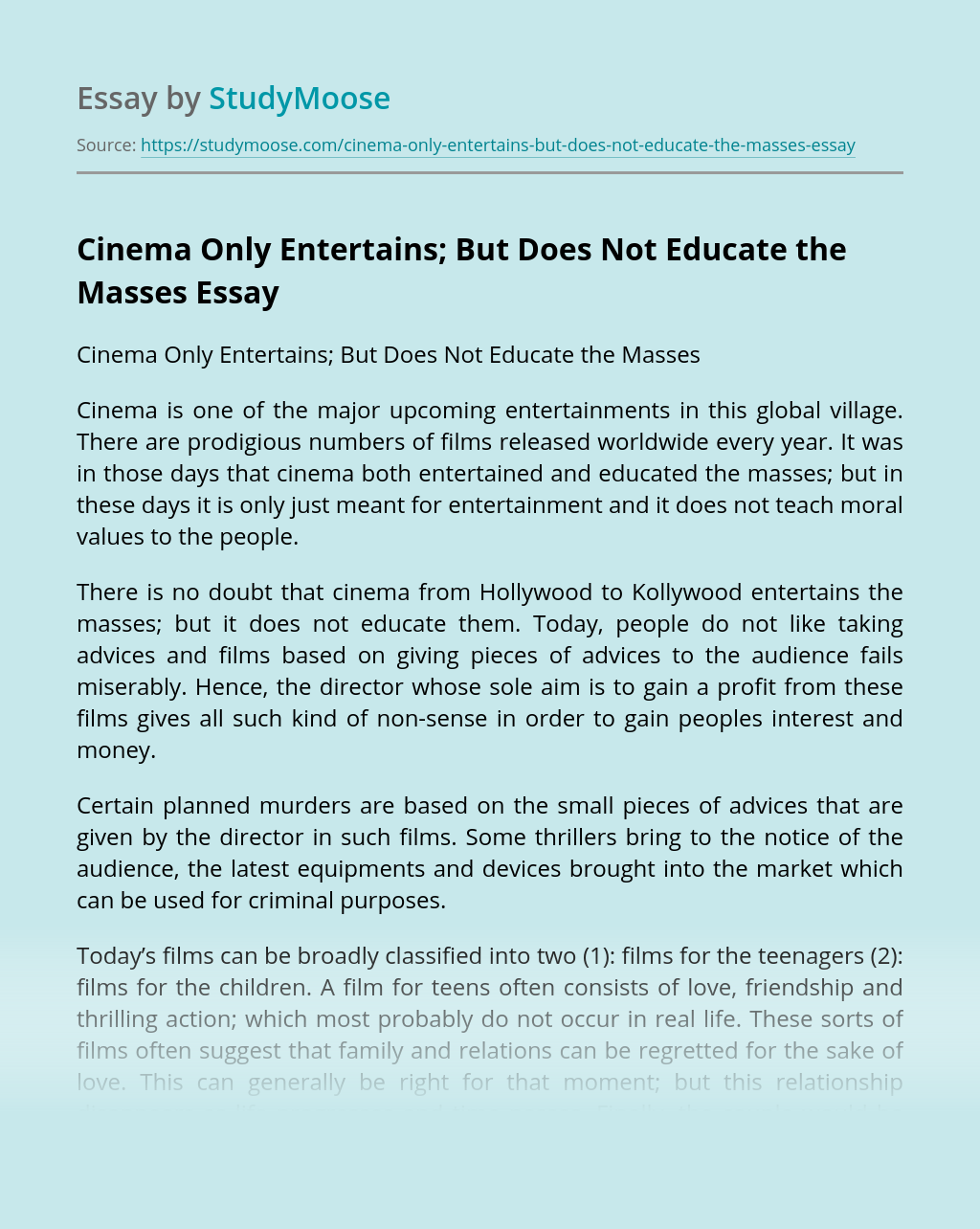 Turn in your highest-quality paper
Get a qualified writer to help you with
“ Cinema Only Entertains; But Does Not Educate the Masses ”
Get high-quality paper
Helping students since 2015
Stay Safe, Stay Original