‘Choose two or more of the central characters and describe them. How has Ron Howard directed your response to them? Do these characters change during the course of the film?’

Cinderella Man is a 2005 American drama film directed by Ron Howard. The film is based on real-life events that focus on the life of the professional boxer James J. Braddock and his struggle through the Great Depression. The main characters portrayed in the film are very diverse and versatile throughout the story.

Howard’s technique was to construct the characters to all have unique and varied personalities which make the viewer feel more immersed in the film. Throughout the film, the main characters undergo a change in personality which allows them to dynamically change with the story.

James J. Braddock is an excellent example of Howard’s technique in the film; to create a dynamic and heroic character who defies the odds. James J. Braddock is first encountered in the first scene of the film, fighting an opponent in the boxing ring and winning by knockout.

Braddock’s attitude for winning in the opening scene highlights Braddock’s success as a boxer before the events of the Great Depression. Five years later, during the time of the Great Depression, Braddock and his family are shown to be in a small house with very low lighting, in contrast to the suburban house they used to own. Howard used this scene to mark the first major turning point in the film. Braddock is faced with an opportunity to briefly return to the ring to support his family, and despite his injuries and his aging body he accepts the fight.

“I have to believe that when things are bad I can change them”. The determination shown by Braddock is another turning point in the film and allows him to continue fighting regularly to support his family. Throughout Braddock’s fights and injuries in the film, his thoughts of his family and future allow him to surpass his struggles and ultimately win the world title from Max Baer. Braddock developed from an unemployed father to a fighting spirit giving a feeling of hope to everybody affected by the depression, which earned him the name “Cinderella Man”.

Likewise to Braddock’s determination and hope for the future, his manager Joe Gould is a character who possesses a wide array of personalities while still having sympathy towards Braddock and his family. Gould had been Braddock’s manager for years and they were good friends. Howard portrayed Gould to have a cunning and witty attitude towards Braddock. During the events of the Great Depression, Gould maintained the appearance of a wealthy, successful businessman. However he was struggling just as much as Braddock and his family were. Gould did this so he would not risk losing his job. “You just don’t want folks to see ya down”.

Mae Braddock criticised Gould for being selfish and only caring about his image, but despite Gould owning a luxurious apartment and expensive clothing, his apartment was empty due to Gould selling his belongings to pay for Braddock’s training. The purpose of this technique used by Howard is to use the apartment to mirror Gould’s personality. Both the apartment and Gould maintain a pompous image on the outside, but on the inside there is a sense of understanding and pain for Braddock.

In contrast to Braddock and Gould, Max Baer is portrayed by Howard as a very arrogant and aggressive character who is seen to have fashion and swagger, contrasting with Braddock’s circumstances during the depression. Max Baer was the World Champion in boxing during the Great Depression, best known for killing two men in the ring. Baer was a very hostile fighter and fought very aggressively with his opponents, whom he often maimed or even killed. Despite having a wife, Baer was seen with two other women in a hotel room which highlights his personality of being very callous or malicious. Prior to his fight with Braddock, Baer confronted him and told him to drop out of the fight. “It’s no joke, pal. People die in fairytales all the time”.

The camera angle facing upwards to Baer as he said those words to Braddock emphasized his violent personality and made him seem much more powerful and intimidating. During his fight with Braddock, Baer displayed his injustice towards Braddock and his family by talking about Mae in uncivilised contexts. Baer also decided to fight in a very hostile and unfair way due to Braddock fighting against the odds and making it past the first round, which he was not expected to do. Baer’s arrogance ultimately helped in his demise and Braddock emerged victorious. 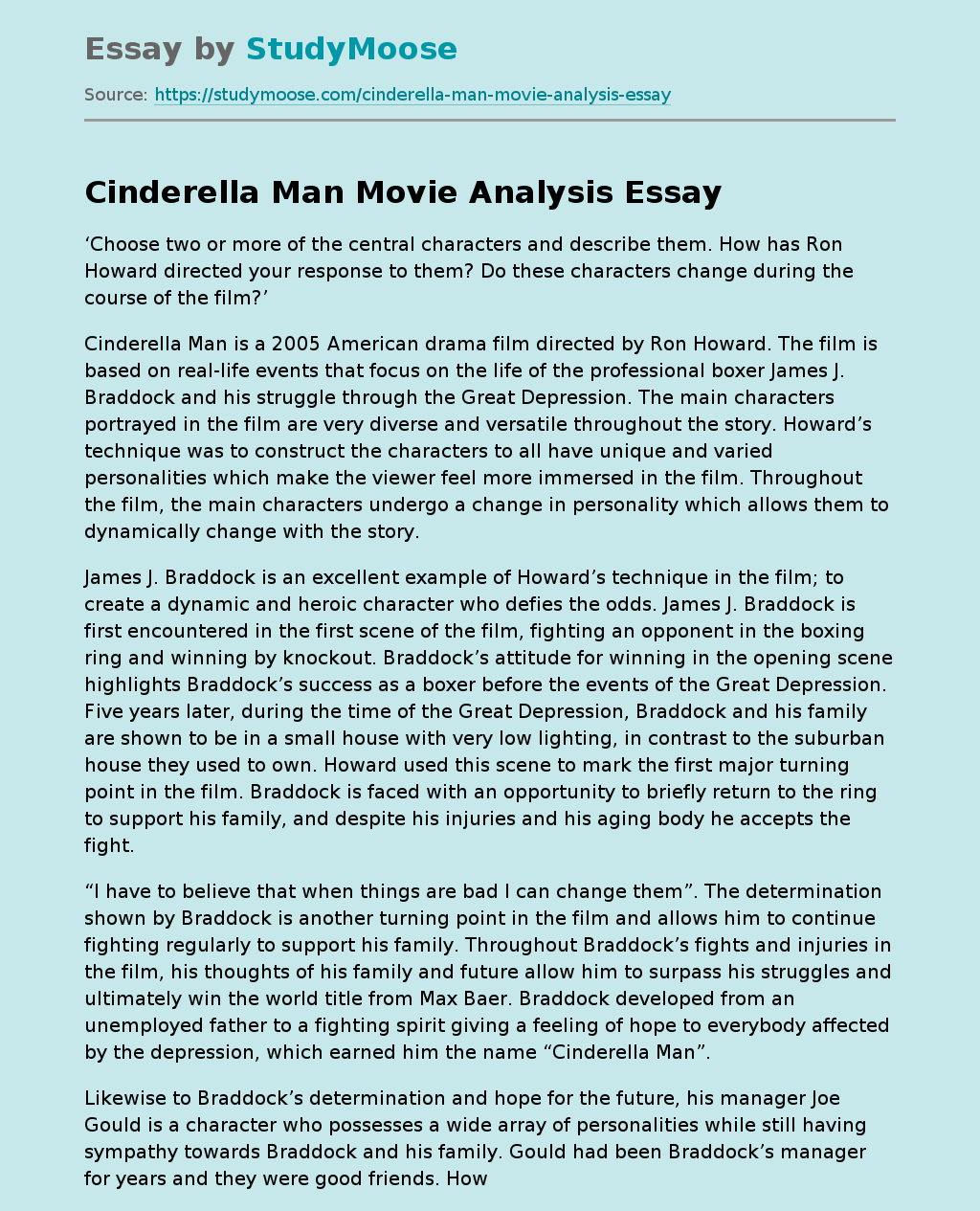