The early period of the 1900 had marked history to all parts of the world with World War I and II. During this time, Winston Churchill and Neville Chamberlain had been major leaders with different views and beliefs separating them. While Winston Churchill was portrayed as the savior of the nation, Neville Chamberlain was totally the opposite. He had been harshly criticized as a failure who easily fell for Hitler’s unjustified actions. However, Churchill acknowledges this man with magnanimous respect in his determination for peace and love during the difficult circumstance that he was in.

Don't use plagiarized sources. Get your custom essay on
“ Churchill’s Eulogy for Neville Chamberlain ”
Get custom paper
NEW! smart matching with writer

Neville Chamberlain had been well criticized as a guilty man throughout the world. While these two man had been well known for their rivalries, Winston Churchill believed that it is natural for circumstances to take on a certain role of a person by stating , “In one phase men seem to have been right, in another they seem to have been wrong. Then again, a few years later, with the perspective of time has lengthened, all stands in a different setting”(Para.

2). By this statement, Churchill firmly believes how his rival had engaged himself with effort and authority to do what he believed as “the instincts of the human heart and peace”(Para.

3), Churchill seems to respect not only the sympathy that he has witnessed, but the sincerity to strive towards something within his own personal belief. While many people strongly disagreed at the time period, the statements made by Churchill tend to not appreciate the admiration that he had.

In our generation, living with principles define a person as having fundamental truth of beliefs. Some of the most crucial ones are justice, honesty and paternalism. Without justice, there will be no such thing as moral rightness. Having justice is significant since it protects the fairness of all individuals.

Without it, nobody will have a firm view on the ideal concept of moral rightness that is based on ethics, law and equality. This can be related to the eulogy, where Churchill is not trying to despise or envy his rival, but instead let others understand who he really was as a leader from the intermediate view. Similarly, honesty is the act of telling the truth and being straightforward with thoughts and words. This principle in society is highly crucial in creating firm relationships with other people. By always maintaining honesty, others will be able to put their trust and faith on the person,

which I believe is effective in the diverse world we live in today. Last but not least, paternalism is also a pivotal principle that can be clearly related to what Churchill had done for Chamberlain. While the world is defined as to assist others in pursuing their significant interests, Churchill took an ironic decision to illustrating his own rival as an “English worthy”(Para. 9). By looking beyond others, Churchill assisted in explaining Chamberlain’s true intention to strengthen the relationships with other countries during the war.

Always holding onto a set of principles lead people in not only having the concept of moral rights, but in assisting others as well. In the eulogy that Churchill shared at the House of Commons, there are latent implications in his sentence structures towards his goal of defining Chamberlain’s action as only for the hope of peace and love with Hitler. He uses the words, “conscience” and “sincerity,” which he looks upon them as significant virtues that all human beings need to have. For example, he states, “The only guide to a man is his conscience”(Para. 2).

In Churchill’s personal perspective, he looks upon these virtues for the people to simply believe in something, just as Chamberlain had. He wants everyone to be firm in their personal convictions, urging us to develop a type of character that we shouldn’t be embarrassed nor feel foolish about. This statement can be related to how his rival did only what he thought was the best choice in the difficult situation that he was in. Also, his statement about Chamberlain acting “with perfect sincerity according to his lights and strove to the utmost of his capacity” (Para.

3) makes an assumption of how he was fearless to reveal his earnestness. Although the results were not the best, Churchill tends to honor Chamberlain’s actions when he states, “this alone will stand him in good stead”(Para. 3). While these two were rivalries, Churchill sets a perfect example of sincerity by firmly stating his belief of Chamberlain as a man with sympathy towards others. Simply imagining a rival of mine speaking negatively at my own funeral tends to be a normal act. However, I personally would have the strong hope of my rival to be sincere and respectful.

I would want him or her to point out who I was as not only what I worked as, but as a person. This may include not only the positive aspects, but the truth that everyone deserves to know even after my death. In addition, it is most likely that a rival experienced a similar type of career as me, which that person will have more lucid feelings about me than what others have since they can relate their lives to my own. Most importantly, the main reason I would want my rival to give a similar speech like Churchill did is because I would have done the same.

Whether it’s a foe or a friend, I believe no grudge should follow a person to the grave. Instead, Churchill had been very clear and confident in trying to support his statements on how he saw Chamberlain as a person. The eulogy that Winston Churchill had for Neville Chamberlain at the House of Commons has been at first surprising. Unlike the majority of people’s view, Churchill believes that Chamberlain died “with the comfort of knowing that his country had, at least, turned the corner”(Para. 8).

While these two were well known as rivals with contradicting ideas, Chamberlain had been widely criticized a failure for signing the Munich agreement with Hitler, which ended up in a disaster rather than peace. However, Churchill had not only been respectful, but magnanimous towards his own rival as having the “physical and moral toughness”(Para. 5). Churchill deeply honors on how his rival had the determination to strive for what he strongly believed in for the best of his country, even through the difficult circumstance that he was in. 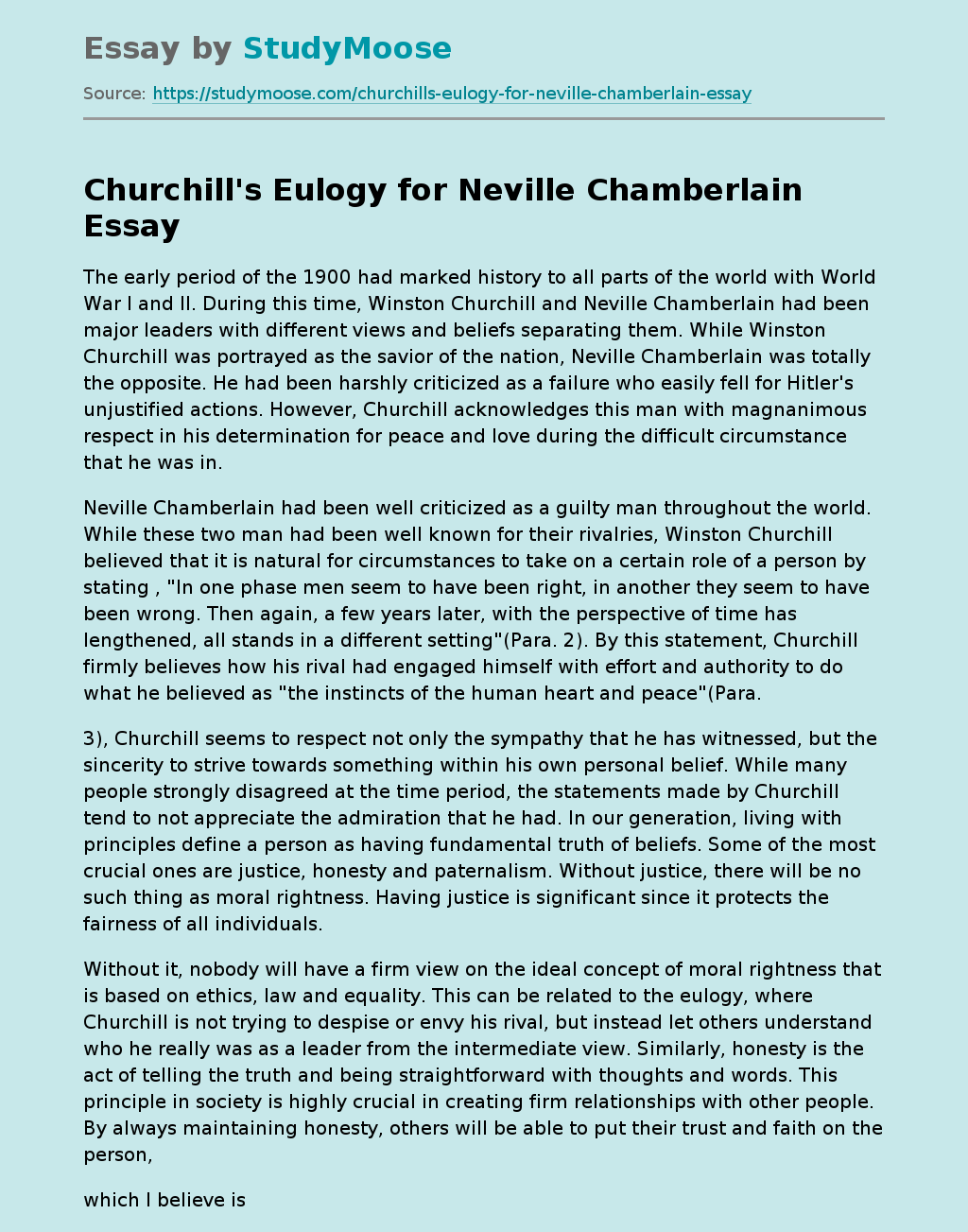