The Mughul empire was founded by in 1526, when he defeated Ibrahim lodhi,the last of the delhi sultans at he first battle of panipat. The mughuls were a powerful dynasty and left a profound impact on the thoughts and arts of the sub continent. This is a brief chronology documenting the time when the mughuls ruled

Turn in your highest-quality paper
Get a qualified writer to help you with
“ Chronology of the Mughal Kings ”
Get high-quality paper
NEW! AI matching with writer

1555 humayun re-conquers delhi.
1556 humayun dies, young akber is enthroned.
1605 death of akber and succession of son jahangir.
1617 revolt in the southern states of the empire breaks out and jhangir sends son khurram to pacify them. Khurram recived the title of shah jahan.

1631 shah jahans queen mamtaz mahal dies during childbirth. Shah jahan commissions the building of her tomb, “the Taj Mahal’. 1658 shah jahan’s son aurangzeb executs his brothers, imprisons his father and ascends to the throne of delhi, 1666 death of shah jahan.

1707 aurangjeb dies.
1857 the mutiny results in the massacre of the people of delhi weak mughul empire collapses and india beomes a british colony. 1862 bahadur shah (zafar) II the last of the mughul rulers dies.

The Mughul Empire started its long regin in 1526 which lasted until 1857. The First Mughul King was Babur who was born In ferghana in 1483. Babur was a descendant of genghis khan and taimur. In 1526 Babur defeated the Sultan of delhi, Ibrahim lodhic

Chronology of the Mughal Kings. (2017, Jan 18). Retrieved from https://studymoose.com/chronology-of-the-mughal-kings-essay 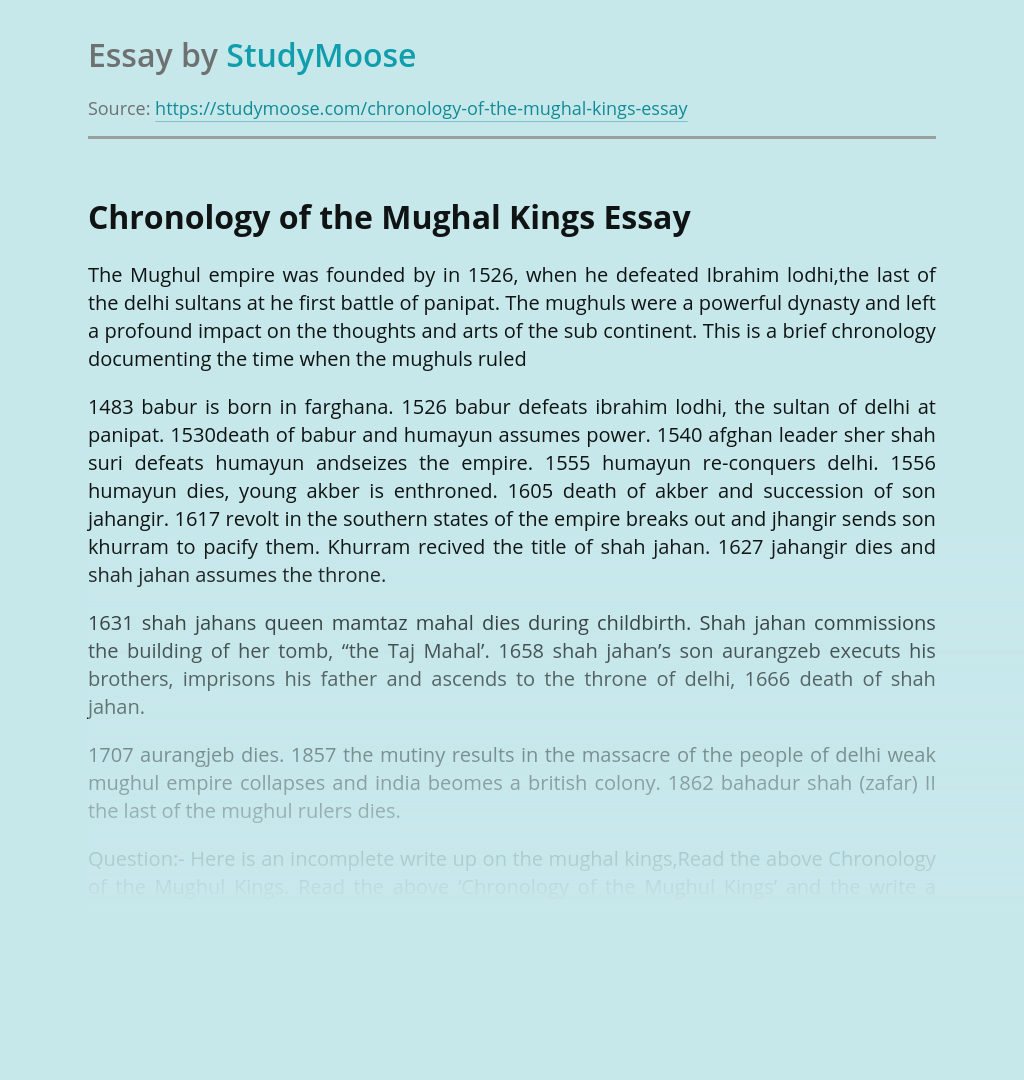 Turn in your highest-quality paper
Get a qualified writer to help you with
“ Chronology of the Mughal Kings ”
Get high-quality paper
Helping students since 2015
Stay Safe, Stay Original