In Doctor Faustus, Christopher Marlowe depicts a nearly diagrammatic study of damnation of the decline and fall of a human soul growing out of excessive pride and overreaching ambition. Doctor Faustus, a well-respected German scholar, grows dissatisfied with the limits of traditional forms of knowledge—logic, medicine, law, and religion. Therefore, he decides to turn to the dangerous practice of necromancy. With the help of his like-minded friends Valdes and Cornelius, Faustus summons up the demon Mephistopheles and informs him that, in exchange for twenty-four years of earthly pleasure, wealth, and honour, he is ready to abandon his soul to Lucifer, the Devil.

Mephistopheles returns to Faustus with word that Lucifer has accepted the offer. Faustus experiences some misgivings and wonders if he should repent and save his soul; in the end, though, he agrees to the deal, signing it with his blood.

Soon, the words “Homo fuge,” Latin for “O man, fly,” appear branded on his arm. Faustus again has second thoughts, but Mephistopheles bestows rich gifts on him and gives him a book of spells to learn.

Soon, it becomes clear that there are limits to demonic power: For example, Faustus asks for a wife only to learn that holy matrimony, a sacrament, is closed to him now. So Mephistopheles promises Faustus a succession of prostitutes, to which Faustus agrees. Throughout this, Faustus is tempted to repent from time to time; but Mephistopheles, Beelzebub, and Lucifer are each time able to distract him for example, with a diverting parade of the personified Seven Deadly Sins.

As the end of Faustus’s life draws near, the mood of the play inevitably lurches from the farcical to the terrifying and demonic. A pious Old Man, warns Faustus of the eternal agonies of hell and entreats him, to repent. Shaken, Faustus nonetheless gives way to the sin of despair and begs Mephistopheles crying out pitifully for more time; the unholy trinity of Lucifer, Beelzebub, and Mephistopheles lead the magician to the unending torment that awaits his spirit. Two scholars later discover his body, horribly torn and dismembered. 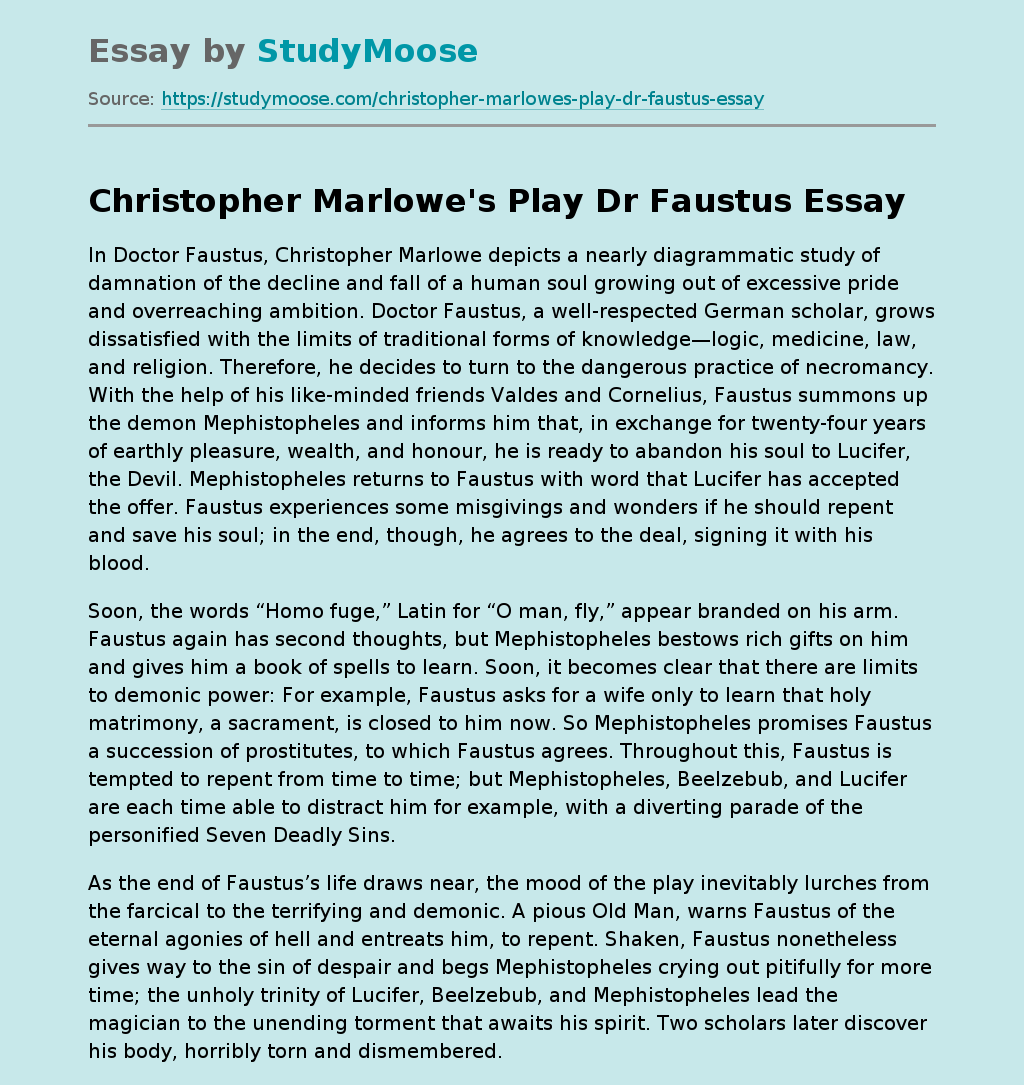