What Christopher Columbus really did to his ancestors?

Christopher Columbus came across the Atlantic Ocean back in 1492, he had been given the “right to discovery” from the Pope of the Catholic Church. There was a problem, the Indians that had inhabited the land for thousands of years, far before Columbus came , were confused to how he could claim their land. Indians today, and many others, will still argue that it wasn’t right. This is where Adam Nordwall comes in. Adam Nordwall was an Indian chief o f the Chippewa tribe.

Don't use plagiarized sources. Get your custom essay on
“ What Christopher Columbus really did to his ancestors? ”
Get custom paper
NEW! smart matching with writer

One day he got on a jumbo jet, instead o f a boat, like Columbus did, and traveled to Italy. Once he arrived, he “claimed” the “undiscovered” land of Italy. To him Italy was undiscovered, he had never been, so he claimed it for his tribe. He thought, “What’s the difference?

He was trying to prov e the point that he couldn’t just come claim land that was already inhabited by people. I think he was successful at making people start to think about what Christopher Columbus really did to his ancestors.

One reason that I think Mr. Nordwall was success ful at proving his point was that he made the newspaper. The newspaper he made it in was not just a random newspaper, it was New York Times, which is also important to note because the event happened in Italy, so this made international news. It might not have been on the front page, but he still got somebody’s attention. Even if nobody did anything to help his cause, people still read about what he did and heard his reason for doing it.

He wanted to make everyone think if it was right what the Conquistador s, like Columbus, did and that it did not make any sense. If it did not make the newspaper it would have just got swept under the rug and no one would have even been able to start to speculate. Another reason he was successful, and a reason people would b e willing to listen to him is that he didn’t come and become violent. When he got off the plane in Italy, the chief said, “[Columbus] came to conquer a country by force where a peaceful people were living, whileI am on a mission of peace and goodwill.” Th ere were many very successful leaders that solely used peace to accomplish change, people such as Martin Luther King Jr. If Mr. Nordwall got off the plane and started using violence, he would have made the news, but he would have gotten very bad publicity and people would have looked at him and used it to say that that’s why Columbus came with violence.

What Christopher Columbus really did to his ancestors?. (2021, Jul 14). Retrieved from https://studymoose.com/christopher-columbus-6-essay 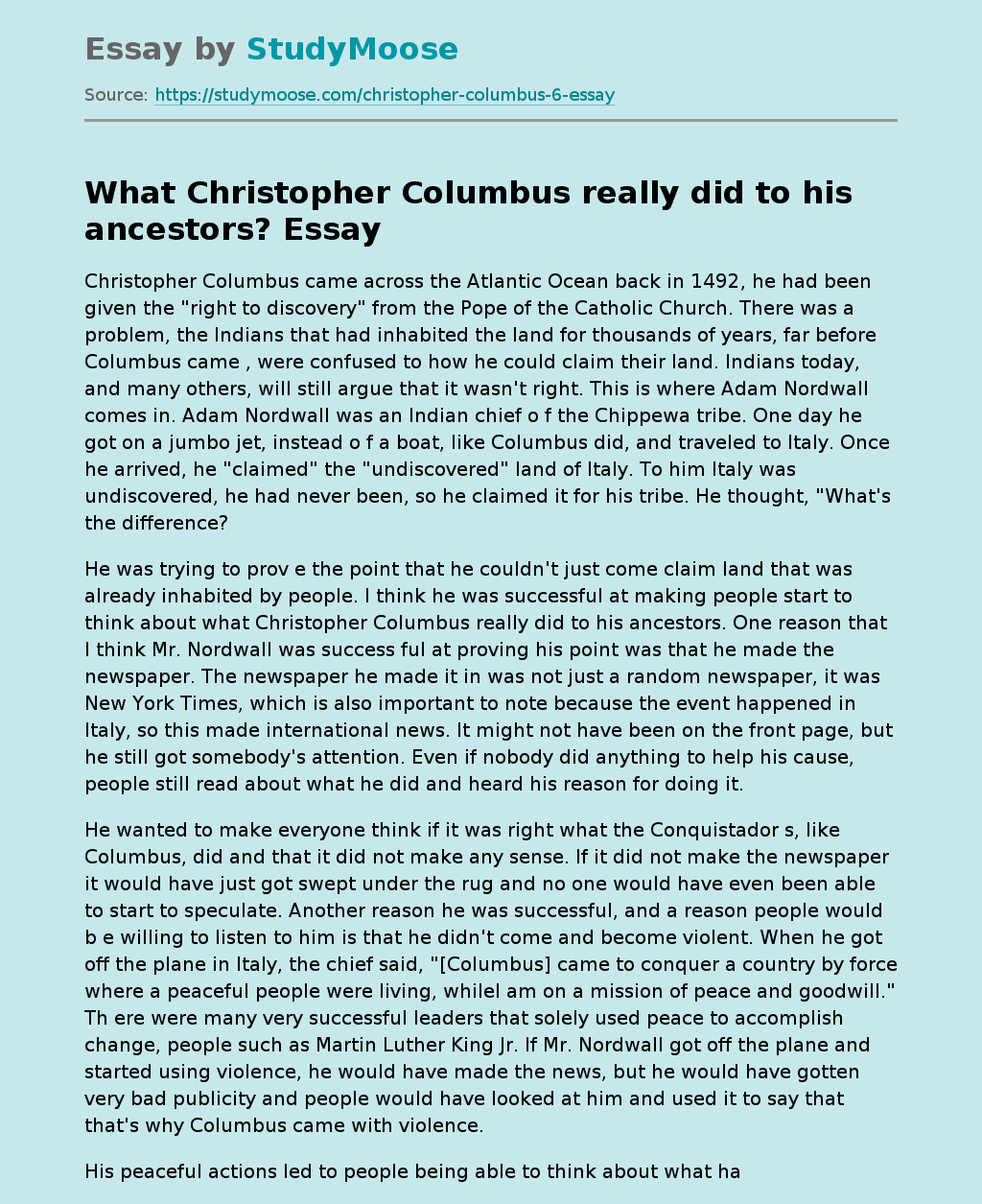