While returning my merchandise I realized that the clerk credited 1,000$ in my account instead of just giving me back the 500$ I spend on the item I wanted to get reimbursed for.

I let her complete the transaction and decide to step back on the side of the register where I go seat on a bench. At that point, I make sure that I hadn’t mistaken the amount refunded to me by taking another look at the bill.

Don't use plagiarized sources. Get your custom essay on
“ Drunken Driving ”
Get custom paper
NEW! smart matching with writer

After completing all of the necessary verifications, I realized that the clerk had actually credited 1000$ to my account. Moreover, the lady clerk at the cash register seemed to be in her 40’s and looked extremely stressed and nervous as if it was her first day of work.

What am I going to do?

My moral responsibility will help me decide what I am going to do by guiding me through the entire process. At this point I had two options, on one hand, I could use the extra money to pay my off my credit card bill and think only about my personal needs which would be wrong as that money was not mine.

Or on the other hand, I also could have gone back to the clerk’s register to point out the error she had made while returning my merchandise which could have potentially gotten her fired as it was the right thing to do. (p. 22)

Is that action the right thing to do?

I didn’t want to put her in trouble because I figured that the mistake of crediting more than twice the amount that was due to me could actually get her fired, therefore, I felt it was my responsibility to point out her mistake as quickly as possible.

Are you going to do it?

So, once back at the register ,I respectfully pointed out the clerk’s mistake as I handed her back my card to make the appropriate changes within the transaction. I saw the relief in her eyes while she could not believe that I had come back to her after being credited more money than I was supposed to.

She corrected the error made during the reimbursement of my merchandise by crediting my account the correct amount of 500$ that the department store owned me. Afterward, the clerk told me that she would be eternally grateful for the honest gesture that I had made out of my own will.

What are the contexts?

After a long and stressful day at work, Sara decides to hit the bar to grab a glass of wine. Once at the bar, she encounters a group of old friends that insist on her coming back with them at their common friends Luke’s birthday party. What was supposed to be an innocent glass of wine as she had a very important presentation to submit first thing the next morning quickly becomes a night full of drinking and catching up with old friends.

Around 11 pm Laura accidently glances at her phone and panics. She starts grabbing all her stuff and heads towards the door while her friends insist on her spending the night over as they all had been drinking. But Sara tells them that she needed to get home because she had an important meeting at work and quickly leaves her friend’s house. Sara gets into her car and starts rushing home in order to finish her presentation before the given deadline.

What are the intentions?

At this point, Sara knows that she had few more drinks than she usually has while driving. But she also felt that none of her friends would be willing to drop her off as they were planning on spending the night at Luke’s place.

Moreover, her friend lived in a different area, so more than an hour away from the city, therefore calling a cab would only waste the few hours she had to complete her presentation. Moreover, Sara decided to drive herself home by simply keeping her eyes on the road at all time and by listening to music at full volume throughout the way.

What are the larger social structures that are affected by drunk driving?

The roads of the city are affected when individuals decide to drink and drive. In other words, the road system and the highway system is affected by drunk driving because such individuals do not consider the life-threatening danger they are not only putting not only themselves into but also the risks they bring to the life of innocent people that are driving on those same roads.

Moreover, drunk drivers also put the life of every single pedestrian that is present upon the same streets into danger by carelessly getting behind the wheels.

Explain the moral characteristics of drunk driving in terms of the three meanings of the term good (personal desire, social order, and value).

Sara decided to drink and drive simply because she didn’t want to be late submitting her presentation at work. She only taught about the advancement of her career as it is extremely important and crucial for her to be successful within the male-dominated field of engineering she is in.

Sara decision of driving drunk essentially affects every single individual on the roads as it puts their life at risk. In other words, individual such as Laura that drink and drive with an unsettled state of minds often end up into car accidents that can harm and even cause the death of innocent drivers and pedestrian on those exact same roads.

The stress of performing better than your own colleagues within the work environment tremendously affect the alcohol consumption levels of employees, which undoubtedly lead them to drink and drive upon the roads of our cities. Simply said, the amount of pressure individuals have to face within their workplace is essentially an issue within our social structure that is promoting the problem of drunken driving.

In what way is the prohibition against drunken driving morally objective knowledge?

The prohibition against drunken driving is morally objective knowledge simply because we can grasp the context of the situation, the intention of the individuals and the consequences of the entire situation. In other words, individuals that drink and drink put a strain on the fabric of social life by creating problems in social living and simultaneously destroying the enrichment of society living together.

Gandhi was the leader of India’s Independence fight during the British rule. Despite being unjustly arrested more than once in his lifetime by the British, Gandhi was free. In other words, even though Gandhi did not have freedom from domination he was “free” because he had freedom in form of self-determination.

As a matter of fact, he ran a non-violence campaign and strictly condemned violence among the revolutionist movement of the country by urging the public to peacefully resist the British Empire by promoting a form of non-violent civil disobedience, as he knew that his step would promote human flourishing in the long run.

Therefore, it can be said that Gandhi’s self-determination gave him the capacity to perform moral acts despite his constraints (imprisonment and living in British-ruled India). Simply said, he was free because he was able to choose and act the way he judges best for not only himself but also for his entire country.

For that reason, despite living among many constraints Gandhi had essential freedom as he had the capacity to exercise a determinate control over his actions through the operations of moral meaning. Moreover, he also had effective freedom as his moral foundation (the person he had become) essentially limited that capacity in question. Hence, Gandhi was truly free simply because “to be moral is to be free”. ( P- 73-74)

5. Christian Ethics defines the analytical tools to depict human affairs as the three historical forces of progress, decline, and redemption. Progress not only entails one’s personal act of responsibility but also highlights the importance of cooperative acts of responsibility among our society.

In other words, progress is only what it means to be human. ( P 107) Moreover, the notion of decline goes hand in hand with the notion of sin, as they both unify to identify with the dynamics of vice, bias, ideology, oppression, impotence and despair while being affiliated with the social structure of evil.

Finally, redemption comes in the shape of a mysterious work of God grace which essentially shapes history by completely changing the events occurring within society by simply inverting and redirecting the impact of sin and the work of responsibility. Therefore, human flourishing is only promoted by redemption mainly because of it being responses of faith and grace

For example, a young atheist politician that has been running an extremely secular campaign, as he does not believe in god and has very strong opinions regarding the existence of any kind of superior power within our world. However, after a fatal car accident that he manages to survive with minor injuries the renewal of his soul occurs when he decides to live his life according to teachings of Jesus Christ by becoming one of his devoted followers.

In other words, the progress process of this individual would only entail him following his own secular sets of beliefs, values, and reason. Which leads him to the decline process that essentially hindered his understanding of the Christian faith altogether by being ignorant while sin and evil surrounded his comprehension of reality.

But with the grace of God, he will be able to go through the redemption process, which will completely change his thinking about God existence and greatness among our world and lead him to come out of this entire process as a better human being. Simply said, he redeems himself from this life changing experience, by becoming a follower of the lord and the savior, Jesus Christ. 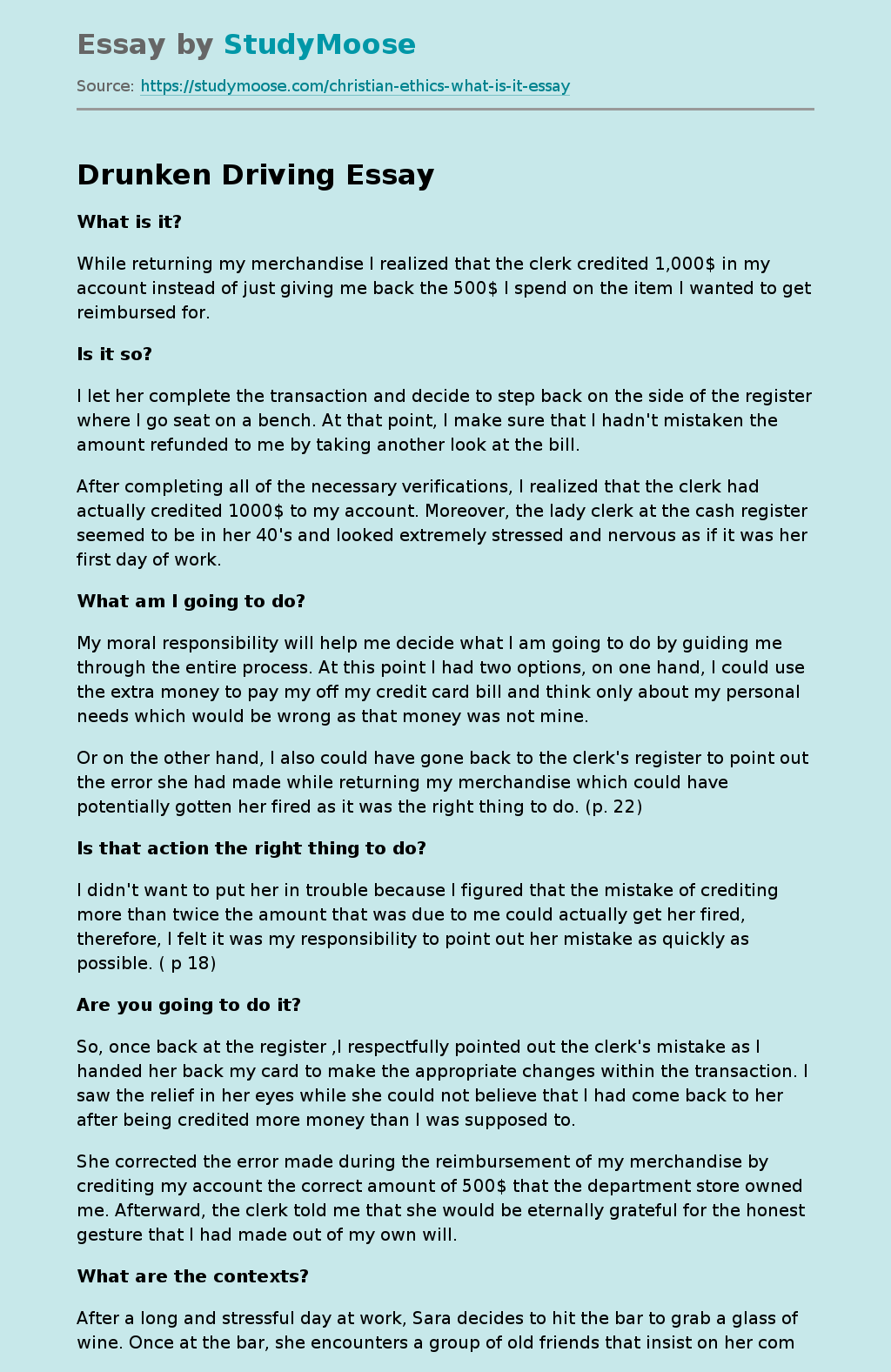