Who was Chris McCandless? Some say that he is a legend and others say that he was nothing more than a boy who threw away his future. Is the only one to blame for his own death? McCandless was the type of kid who always questioned things; he desired to know more but refused to work for the answers. In elementary school, McCandless was placed in accelerated classes but because he was so stubborn he refused to listen to the teachers and do the extra work.

Don't use plagiarized sources. Get your custom essay on
“ Chris McCandless ”
Get custom paper
NEW! smart matching with writer

All in hopes that he would convince his teachers he was not smart and he would be taken out of the accelerated classes.

McCandless rarely planned or prepared for the future, causing him to be unprepared for his journey into the Alaskan wilderness. He traveled into the wilderness because he wanted to discover what was missing from his normal life. Through his journey he realized that true happiness is when you share experiences with others.

Unfortunately he discovered this too late into his journey and when he tried to return back to civilization his route was flooded. He soon ran out of food which inevitably leads to his death.

Curiosity killed the cat, and unfortunately in this story curiosity killed McCandless too. He was driven by curiosity and passion to find out about what else this world had to offer. He refused to let anyone or anything stop him from finding out. His desire to live without money and a plan for food, water, or shelter motivated him to follow his dream and to explore what Alaska has to offer.

Throughout his journey he met many amazing people that left a lasting impression on him and they were like his family, some were better than his real family.

In the public’s eyes Chris McCandless may seem like he went crazy or insane, and they may be right. But he went out and followed his dreams, went against societal norms, and experienced things that most people will never get the chance to. People can say a lot of different things about Chris McCandless but one thing that is known for certain, he is and forever will be a legend. His story will be told in classrooms for many years. Though no one can truly answer the question, why did he do this? No one will ever know what this young man was thinking the day he left his 1982 yellow Dutsun and walked into the wild.

That question may never be answered but when thinking about his journey and his courage to refuse to conform, it is truly inspiring. In today’s society those who tend to stray away from social norms and do something that is slightly different are usually viewed in a negative light. Chris McCandless did not care if he was rejected from society, he knew that there had to be more out there and he chose to go find out. It is very rare that you hear of people giving up living a luxurious lifestyle and going to live in the wilderness, Chris’s story is extreme, obviously, but there is a message behind it.

If people would give up worrying about the material things and start to appreciate the natural things that this world has to offer maybe they would see that they are not actually free. Chris experienced true freedom and true happiness once he left civilization and had nothing holding him back. In every photo of Chris, he is smiling. Just like the last picture of him, he has a big smile on his face in front of the bus he bus he called home. In today’s world we think we are free but we are really living under this continuous pressure from society to conform and be wealthy. 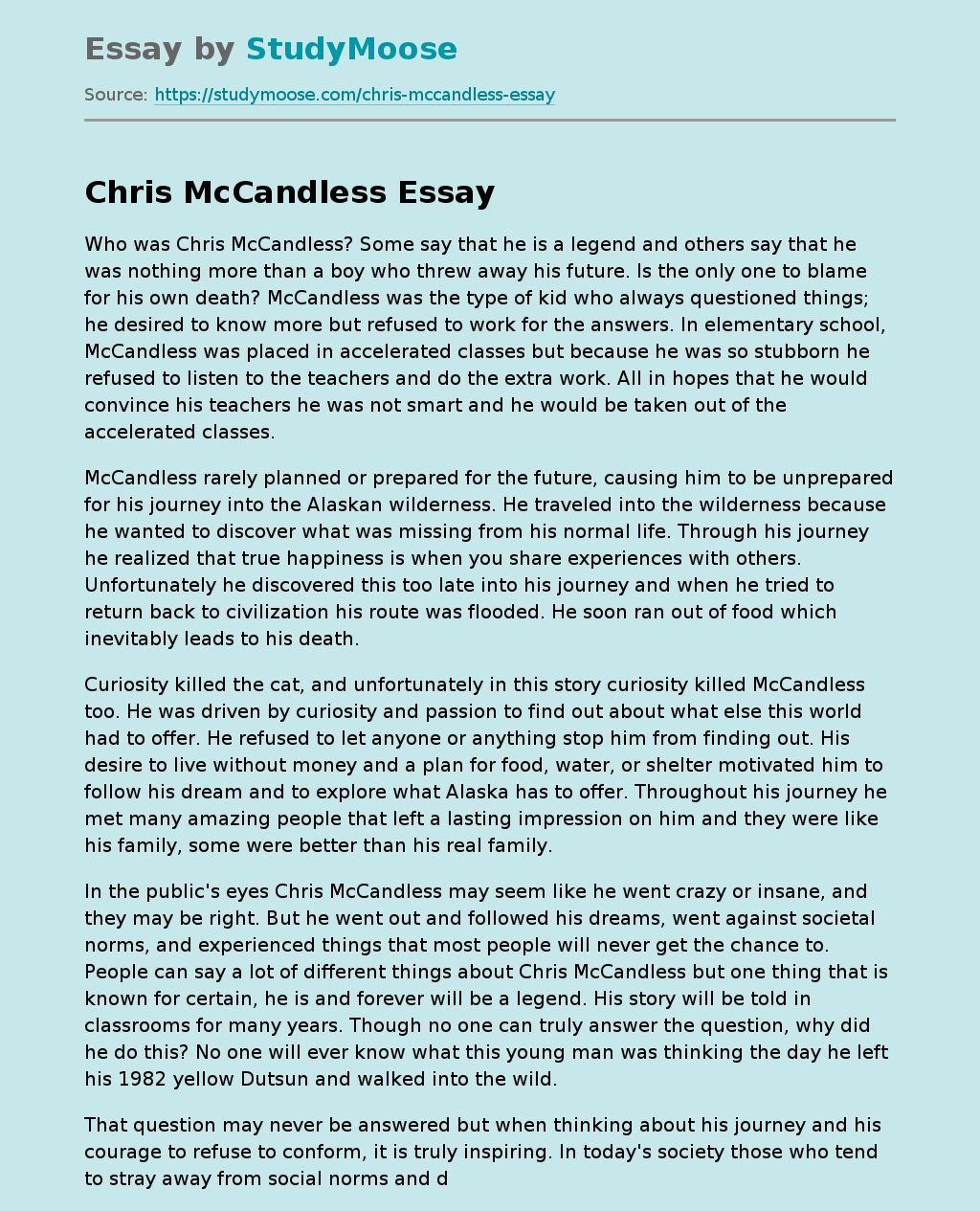