In the book Into the Wild by Jon Krakauer, Chris McCandless had many decisions to leave his old life behind and start over. Chris’ decision to leave was justified. When he left without saying goodbye, it made it easier for him to let go of his past and focus on what he wants to do in the future. Three reasons why his decisions to leave his family without saying a word were justified were that McCandless could make all his own decisions, nobody had a chance to tell him that he could not leave and it did not allow anyone to find out where he was going.

Don't use plagiarized sources. Get your custom essay on
“ Chris Mccandless’ Decisions to Leave Were Justified ”
Get custom paper
NEW! smart matching with writer

In the following quote it supports that he made his own decisions, “To symbolize the complete severance from his previous life, he adopted a new name,” (Krakauer 23). Alex made the decision to change his name.

Having the ability to make all of his own decisions allowed Chris to have more stability in his life. One of the best parts of making his own decisions is that he got to learn things by himself, and if he made a mistake, he had a chance to learn from them.

The following quote supports that his mind could not be changed and that nobody could tell him or convince him not to leave, “When Gallien asked whether his parents or a friends knew what he was up to… Alex answered calmly that no, nobody knew of his plans, that in fact he hadn’t spoken to his family in nearly two years,” (Krakauer 6). Alex made the decision to continue not speaking to his family even before he left for Alaska. Alex’s decision to not talk to his sister before leaving must have been hard, the following quote shows how close Chris and Carine were, “I think it was one of the reasons Chris nd I were so close. We learned to count on each other when Mom and Dad weren’t getting along,” (Krakauer 107). Alex did not get along with his parents, he only got along with his sister, Carine. It would not have been hard to leave without talking to his parents because they did not have a good relationship. Another reason why his decisions were justified were because no one could have the chance to find out where he was going, the following text explains this reason. Read justification report example

The last of three reasons that McCandless’ decisions were justified are explained in the following text. Chris leaving without any contact with his family made his decisions justified because it did not give anyone a chance to find out where he was going. The following quote shows how nobody could find out where he was going, “Toward the end of June, Chris, still in Atlanta, mailed his parents a copy of his final grade report… It was the last anyone in Chris’ family would ever hear from him,” (Krakauer 21-22).

By Alex sending them his grade report and then not contacting them again after, it did not give them any chance to find out where Chris was going on his trip. That would have been good for him because he would not have wanted to listen to anyone telling him that he should not leave. His family would not want him to leave and go off into the wilderness by himself, without being properly prepared. All decisions he made to leave were justified. Chris’ decisions to leave without saying goodbye were justified. 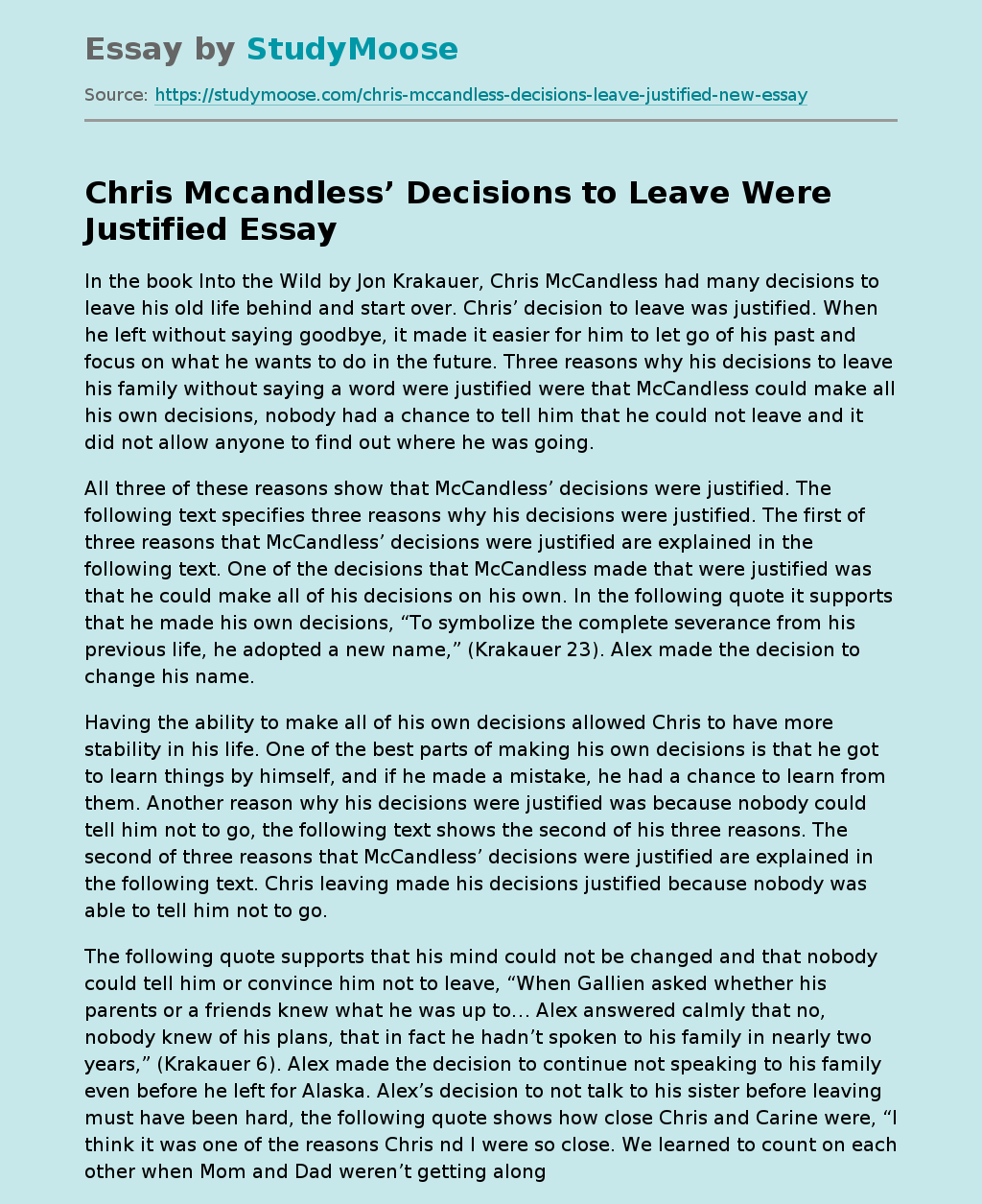