Choosing the Path of Thought Confucianism, Taoism and Legalism

A semi-contemporary way of life that could be compared to the teachings of Daoism is that of the hippie lifestyle, in that both put an emphasis on the idea of getting back to the natural state of things by striving to do as little as possible or in other words ¨going with the flow¨. The Daoist did this by modeling the way they live after the after the characteristics of an all-encompassing force called the Dao. The Dao ¨Conceived of as having no name , it is the originator of heaven and earth; conceived of as having a name , it is the mother of all things¨ .

Don't use plagiarized sources. Get your custom essay on
“ Choosing the Path of Thought Confucianism, Taoism and Legalism ”
Get custom paper
NEW! smart matching with writer

The Dao is simultaneously the source of everything ,yet does nothing and so its followers strive to be the same. This act of emulating the Dao is Called ¨ THE WAY¨ and is basically comprised of intervening as little as possible and letting things take their natural course. ¨ THE WAY” can be followed in all aspects of life from the common man to not seeking riches to the ruler being hands off and letting his people come into themselves.

Ultimately the main goal of Daoism is to try to return to your most Natural self and shun all that is in this world that can lead you away from you true and natural state . With how crazy and complicated the world can get it is understandable why a people would be drawn to a philosophy that wanted to make the world simpler and more peaceful everyone wants some peace from time to time.

The main form that respect takes in Confucianism is Filial Piety or the respect and obedience to one parents. This practice of unwavering obedience is carried throughout life and even lasts after the death of said parents as is explained in the Analects “The parents when alive should be served according to propriety; that when dead, they should be buried according to propriety; and that they should be sacrificed to according to propriety”. This need for propriety and respect particularly within the family show not only the importance of family within Confucianism but also the importance of calling back to ones “roots” if you will or acting as those before you did for that is where the rule of propriety come from and where most of the Respect is focused. As to who would be drawn to this philosophy and why to goes to say that again anyone would be drawn to a philosophy that tries to make order out of the chaos that was and still is this world. That being said those who hold a position of power may be even more inclined to push do to the fact that it sell obedience to both your superiors and the rules set for you as the ideal.

The main guiding force of Legalism is just that Force. The answer to most of the problems facing man in legalism is too simply tell someone what is the right way to live with strict laws and then when those laws are either broken are followed you use reward or punishment to reinforce them accordingly. This system of reward and punishment is called the “Two Handles” and is simply summed up by Han Fei “The two handles are chastisement and commendation. What are meant by chastisement and commendation? To inflict death or torture upon culprits, is called chastisement; to bestow encouragements or rewards on men of merit is call commendation.

” This harsh system of punishment and reward is the core of legalism and is the way that this philosophy tried to bring order out of the chaos. To make the use of the two handles more effective another large part of legalism was centralization of power, a legalist ruler would have all power flow from him so that he would then be the main authority on all matters and thus the master of the “Two Handles”. This consolidation of power also bolstered other core belief of Legalism and that is the belief that everyone is equal in the eyes of the law from noble minister to peasant farmer the consolidation allowed constancy from the law since it flowed from one man. On the matter of who would find this philosophy appealing, it is rather simple those with authority would be drawn to a way of life that put such stock in it.

To look at each philosophy it simply not enough the differences between them also give us a better understanding of not one their individual aspects but also how they might react with others. There are three main areas where philosophies differ are how to be the ideal man, how to be the ideal ruler, and core beliefs.

The idea of standing in Awe also goes against the go with the flow and let go practices of Daoism for it could foster envy of that which you are in awe of and thus stop you from shunning that which keeps you from your natural state. The Daoist wise person is also described in text.” If we could renounce our sageness and discard our wisdom, it would be better for the people a hundredfold. If we could renounce our benevolence and discard our righteousness, the people would again become filial and kindly.” This belief of letting go of even the good aspects of society to reach a natural state goes against almost all that Confucianism stands for with its strict adherence to the rules of propriety and respect or even its description of a superior person standing in awe. Ultimately the key difference of an ideal person in both philosophes is one wants you to hold onto the rules and traditions of the past and one wants you to let them go.

All three philosophes go into how one should rule and the differences between them are apparent. In Daoism the rule has the most hands of approach. It is believed that the more a ruler tries to manipulate his kingdom the quick it will go to ruin and so the proper way to rule is to intervene as little as possible and let things take their natural course as much as possible. This is in direct contrast to the legalism which takes a almost Machiavellian approach to ruling by consolidation power and overseeing all from the top.

Another way that Daoism differs in ruling is the advancement of individuals in the government, Daoism buts no stock in advancement much at all for it fosters competition as is said in the text “Not to value and employment of a superior ability is the way to keep the people from rivalry among themselves. This is a stark divergence from the beliefs of both of the other philosophes which hold merit in high regard when it comes to advancement. The other major difference that appears in reference to ruling is between Confucianism and Legalism, it takes the shape of what is expected from a ruler. In Confucianism the leader is very much expected to lead by example and follow the same rules as proprietary as their subjects. Legalism takes a different approach in that the expectations lay more on the ruled and not the ruler by way that it is the ruler who sets a and enforces them.

The last major difference between the three philosophes has in a way already ben show and that is a difference in core tone of each of them. The two that are easiest to contrast our Daoism and Confucianism. As stated in the beginning of this essay the core driving theme of Daoism is the following of “THE WAY” which in layman terms is basically doing as little as possible so you can become like the Dao and reach your most pure natural state. This contrasts with the core theme of Propriety in Confucianism on multiple levels nut ultimately it boils down to this on cannot follow the rules priority if they have let go of everything to follow “THE WAY” , and one cannot follow the “THE WAY” and reach their basic natural state if they are holding on to the rules of propriety that has be based down to them.

Confucianism, Daoism, and Legalism are some of the most influential schools of thought to come out of classical China, and though they differ on many thing they and others have all worked together to form the mosaic picture that is chinese culture.

Choosing the Path of Thought Confucianism, Taoism and Legalism. (2021, Dec 07). Retrieved from http://studymoose.com/choosing-the-path-of-thought-confucianism-taoism-and-legalism-essay 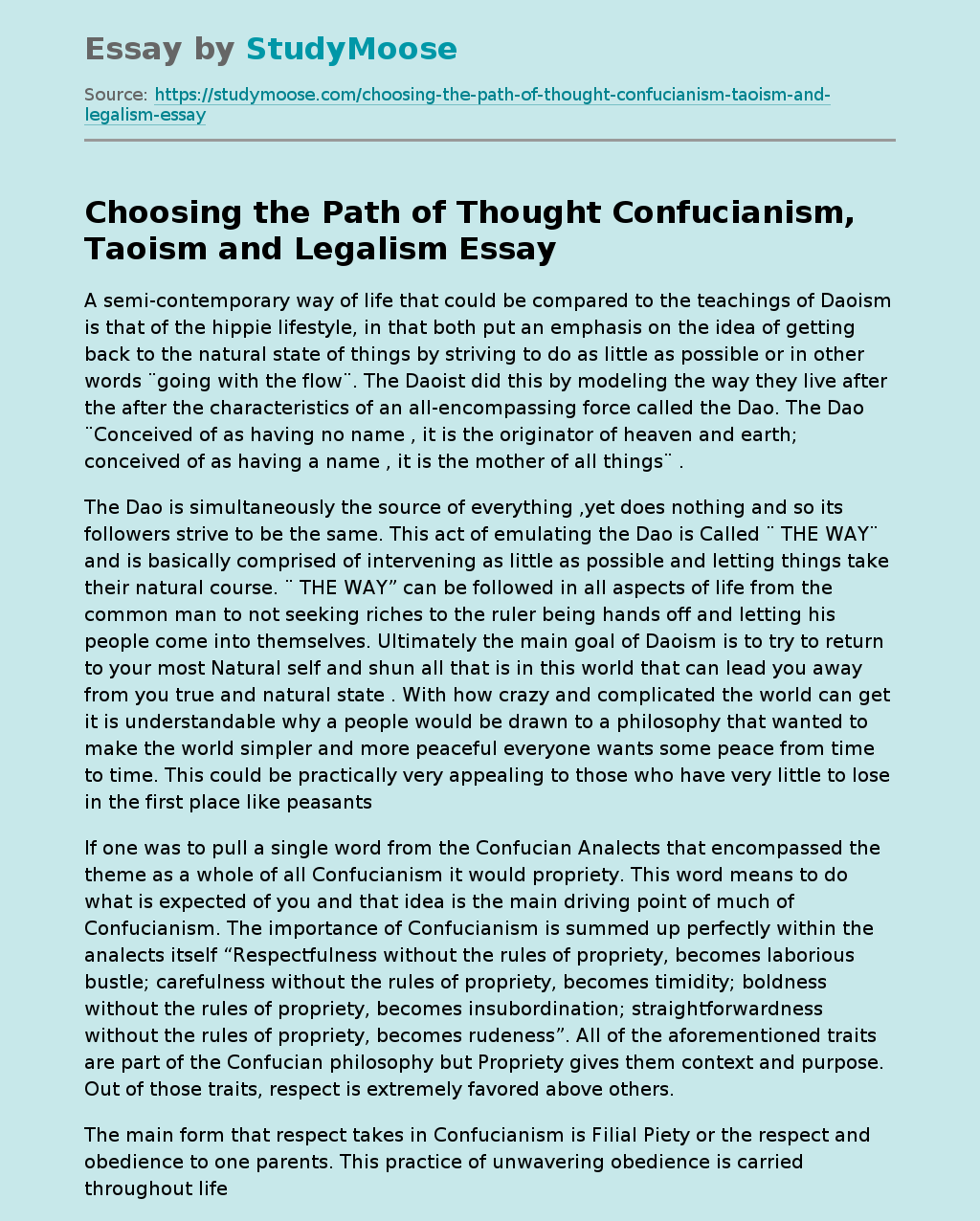