Choose the Right Path in Life

Damion Booker is a 6’5 point guard from Rialto, California that is supposedly the best point guard since Magic Johnson. Magic Johnson was an incredible athlete he was versatile, had basketball IQ, he averaged a double double, and most of all a leader on the court. Damion Booker followed those same exact aspects. Damion Booker was the first round draft pick and was drafted to Los Angles Hokies and previously went to Rialto State University (RSU). Damion Booker majored in Business and had a GPA of 3.

Don't use plagiarized sources. Get your custom essay on
“ Choose the Right Path in Life ”
Get custom paper
NEW! smart matching with writer

9. Not only did he have great athleticism and skill, he was intelligent. He made honor roll every year and challenged himself more and more. Every teacher loved him and was very popular around campus. He was also involved in many activities such as karate, played piano, and volunteered at a senior citizen home a couple of hours every summer break. While being involved in many activities he met a guy named Elijah Hearth. Elijah Hearth was a good friend, but also a troublemaker.

In addition, while Damion Booker was hanging out with his friend Elijah Hearth he met a new agent and felt he was fit for the job. His first agent was unreliable and not trustworthy. A few days later Damion Booker got a call saying there was an NBA Lockout while at home. His agent said he didn’t have an idea when the new season was going to begin. He was very shocked and heartbroken, He couldn’t believe it. Damion Booker had to find some way to make money so he decided to own a business that he’s been attempting since he was a senior in college.

Damion Booker was bored so he became more involved. A few weeks later his resteraunt opened it was named Damion Booker Palace. He made big bucks and had a lot of money. As a result, he became very cocky in everything he did. It took a lot of his time to owning that restaurant.

He took time away from basketball to put in work to own the Palace. He had earned money twice as fast as regular people who started their business. For most people it takes years to own a business, but for Damion Booker it took him a month. The background behind that was that he made this special sauce that attracted people all over the world. Damion Booker made a tasty, scrumptious sauce that was called the Damion Cold Killer Pasta Sauce. It was supposedly the best sauce nationwide and it’s the bestseller at Damion Palace. It attracted wild, bizarre eaters like Andrew Zimmern. The pasta sauce was so good Andrew Zimmern said it was the best pasta he ever tasted.

As a result, to the Cold Killer Pasta Sauce it did have a secret ingredient. The secret ingredient was this famous pepper that came from Peruvia. It was called the Peruvian Puff Pepper. The Puff Pepper had this special flavor that made ingredients spicier and more flavorful. The sauce also had extra amounts of salt and other excessive ingredient but the extra salt and the puff peppers are the ones that made the sauce taste better and more addicting. The sauce became so addicting that it made skinny people fat and the fat people become fatter. The sauce is sort of in comparison to a big mac from McDonald’s. Lots of people bought it and it was very addicting. The Puff Pepper had a special element that made you beg for more and more. Damions Palace put many businesses on bankrupt because of how good their specialty was. The only business that remained standing were McDonald’s, Jack in the Box, Carls Jr, Taco Bell, Applebee’s, Panda Express, and Denny’s but they were losing the average customers because Damion Palace was taking over because of their special pasta sauce.

They were also losing money to in which that was a bad thing and tried putting more advertisements onto TV commercials, radios, billboards, and blimps. People didn’t care to much about the advertisement of TV commercials, blimps, billboards, and radios all the people cared about was Damions Palace and their special pasta sauce. Damion Booker came up with the idea on one boring weekend and decided to cook. All of a sudden, he came up with making pasta sauce because that was his mother’s favorite thing to eat while she was young and she would make it on special occasions. He went into his cabinet and pulled things such seasonings such as salt and pepper, and all kinds of sauces that his mom had stored. Then, Damion pulled out a bowl and started mixing a concoction. He tasted a couple of mixes and didn’t like them to well.

After a couple of more mixes he tasted a delightful sauce that he believed tasted quite amusing. They didn’t have much because they Damion’s mom didn’t make much money. They weren’t poor but they weren’t fortunate. After tasting the sauce he knew he was going to become successful in the future. While doing this he realized he needed a backup plan for when the NBA comes out of its lockout. His backup was to have his brother take over Damion Palace when the NBA lockout ends. By the time Damion got settled to being a business owner the lockout had ended and it was time for Damion to start basketball again.

The first couple of weeks the Palace ran very smoothly. At one point they had more customers than ever recorded. Damion was getting settled with basketball and his brother was taking over the best restaurant in the nation. Life couldn’t get any better for the Booker family! As life ran smoothly they became extremely arrogant until a fire burned down the Palace. Damion was gloomy and felt like a complete failure, but still confident. Although the palace burned down, Damion didn’t know the place was burned down until the all-star break he checked in and called his brother to ask how the restaurant was running. Damion brother told him the place got burned down. Damion was furious! Damion’s Brother didn’t want to interfere with Damion’s basketball career. Their relationship was corrupted and didn’t talk to one another for a long time. They constantly would argue and have many quarrelsome disagreements.

When The Bookers lost their restaurant, they became unfortunate again and were very depressed. Their family began to go on corners and beg for money for a living but not for very long. They were going through some tough times but they always overcome the tough situations. By the time the Bookers started making more money Damion had started preseason basketball with the Los Angles Hokies. He was a star on his team like the whole world already suspected. To modern times Damion Booker came to the NBA similar to Kyrie Irving. Kyrie Irving was a first round draft pick and immediately became a star in the NBA. Life became good for Damion Booker again he was getting fame and publicity. He was getting so much fame and publicity that he acted as if he forgot that his own restaurant got burned down and started treating his family very well. He started to be in magazines, commercials, and on the internet. Damion Booker became the face of basketball and more importantly the face of Rookies.

Overtime Damion Booker became cocky bad things begin to happened to him again. Damion booker was going for a slam dunk on a fast break and hurt his ankle. He was on the ground for 10 minutes and couldn’t get up. He felt paralyzed and the medical staff had to pick Damion up & put him on a stretcher. The next day he went to the doctor and they told him he had a ruptured Achilles tendon and that he will never be able to play basketball again. Damion Booker was upset because basketball was his life and if you took basketball away from him it was like taking his life away. Basketball was his Life! He played it almost every day and whenever he had the time. On the offseason of when Damion was in college he would always go to the park and have pickup games. He would dominate and win almost every single game.

Damion didn’t want to listen to the doctors. He refused to listen to anything they said. Damion was going to come back and play in the NBA regardless if they said he could or couldn’t. The network technician believed that he was going to be out for his career and so did the whole world. Unbelievably Two months later, Damion stepped on the court and the nation was shocked. It was a remarkable return and on his debut from returning he had twenty- two points, six assists, and five rebounds. People knew this kid was special because nobody had ever recovered from a ruptured Achilles tendon and also because of how fast he recovered from his injury. Later, he got rookie of the year and averaged 18 points a game and became cocky again.

In Addition, to Damion getting cocky after he won rookie of the year he began to get caught and this time he was messed up for life. He started getting influenced by his friends and thinking he was better than everyone in the world. That same night he won rookie of the year Damion went out partying with his friend. There was drugs and alcohol that he got into that just completely messed up his mindset. He started missing several practices, get to the team room late, disrespect the coaches, and many other things that got him into some trouble.

Also, his numbers dropped, and appeared always tired. Instead of Damion averaging 18 points a game coming from the injury he averaged about 8 points a game. As he kept doing these actions they noticed a drastic change and ordered Damion to take a drug test. A couple days later the team got the results and he failed the drug test. After they got the results the Hokies released him to free agency and no other team wanted him. He realized he made a mistake and started to feel depressed. As a result, he got kicked out of the NBA and felt so lost he committed suicide.

Choose the Right Path in Life. (2017, Jan 18). Retrieved from https://studymoose.com/choose-the-right-path-in-life-essay 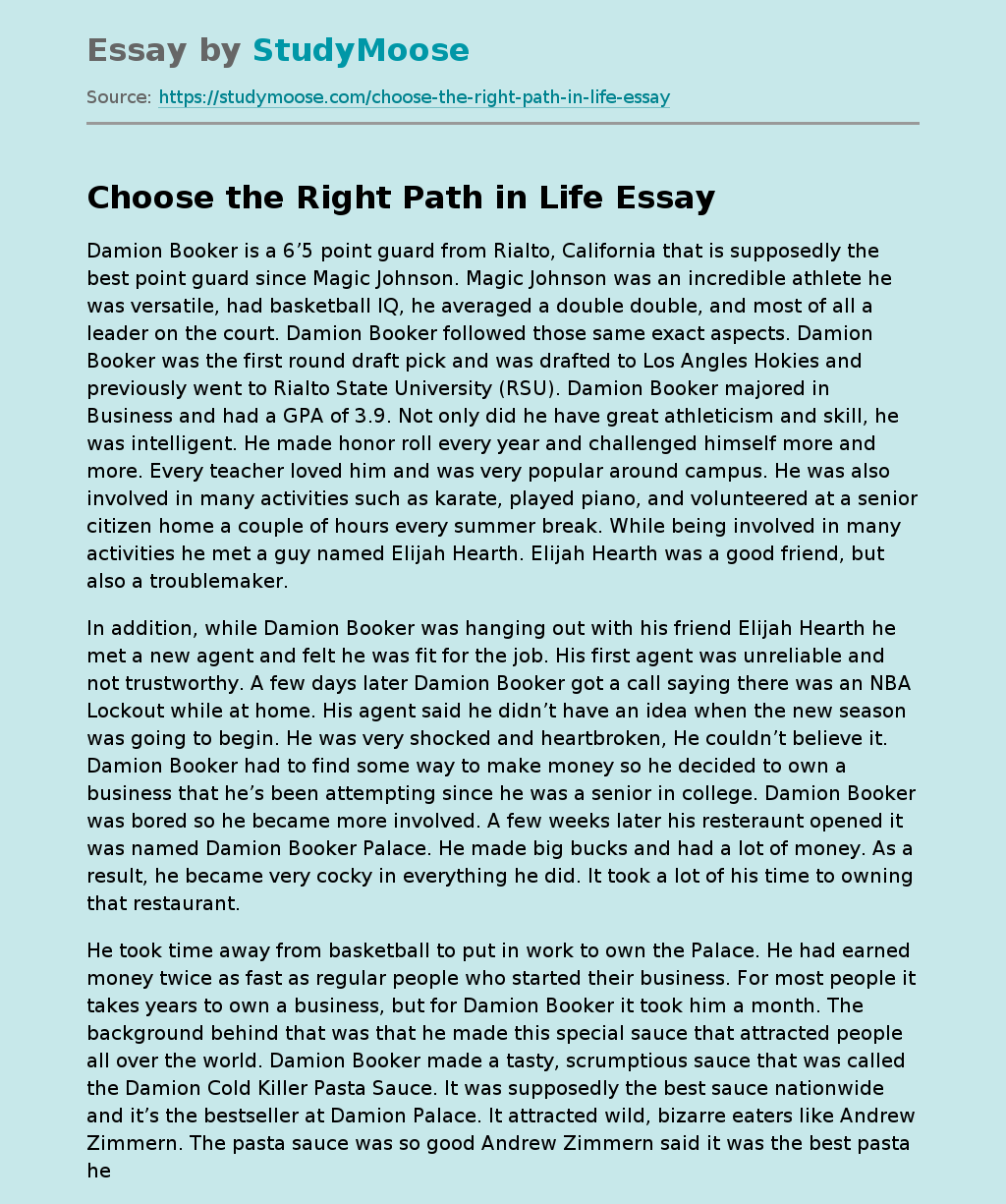