Three poems that are somehow associated with time are: ‘Porphyria’s Lover’, ‘To His Coy Mistress’ and ‘Amen’. These poems all explain and explore time in different ways, time passing, time standing still and so on.

The main theme of ‘Porphyria’s Lover’ is about the wish of one man for time to stand still, that is for things to remain the same. The man achieves this in a very unique way by killing, the one he wishes not to change.

Don't use plagiarized sources. Get your custom essay on
“ Choose 3 poems that use the subject of time and explain how and why ”
Get custom paper
NEW! smart matching with writer

In the diseased mind of the man, making the world stop, and indeed this woman could be said to metaphorically “be his world” in the sense that she is the only thing he cares and thinks about, is a way to make sure that she never stops loving him. When the speaker says, “That moment she was mine, mine, perfectly pure and good”, this is suggesting his possessive attitude. His intense desire for her to always love him is the reason for him to want time to stand still.

Time then, in this poem is portrayed as a thing that changes and alters things, and making time stand still is a way to preserve things in their desirable state, a rather macabre state in the case of this poem.

Time is used in this poem to emphasize that states of mind, opinions and physical matter all change, and there is no real way to stop this. It shows the futility of trying to stop time, as it can only bring you grief, not to the conscience of this insane man, but certainly to “us at home”.

The man in this poem attempted to stop time but this only serves to enforce the point as this resulted in the death of the woman he loved, disastrous consequences for most of us.

‘To His Coy Mistress’ uses time in entirely a different light, instead of the emphasis being put on time stopping, this poem concentrates on the implications of time passing. This is made clear even in the opening line of the poem, where the speaker says

“Had we but world enough, and time, this coyness, Lady, were no crime.” In this poem, time is seen also seen as the enemy that changes things. The poem is also filled with images of long stretches of time, used to exaggerate and further deceive and seduce the woman.

“Till the conversion of the Jews”, for example gives us an image of a long way into the future. The first stanza is little more than an introduction, where the man tries to appear patient, only in the second stanza are the images of the unpleasantness of time and the future made apparent, for example in line 23:

“And yonder all before us lie deserts of vast eternity”. The word desert suggests infertility and lifelessness, the future that time brings on in undesirable, unattractive and empty. Therefore, the reason of the man’s argument is not to waste time, and take advantage of it while they are still young. Time as a changer is the theme that stretches throughout this poem, as it did in ‘Porphyria’s Lover’.

If this man is to convince his mistress to have sex with him, then he has to make the future appear unattractive. When he says “And at my back I always hear time’s winged chariot hurrying near”, at the start of the second stanza, he wants to create and image of a force inexorably moving closer to them, and with every inch, the bleak, lifeless future seems hopeless. It also says that time is always at your back, that is you can never escape from it, it will always be looming over you like. “Hurrying” tries to demonstrate that this is happening very quickly, as does the image of a chariot, time passes more quickly than you think.

One of the main reasons this woman does not want to lose her virginity is her honour. The man cunningly tries to circumvent and negate this obstacle by saying

“Then worms shall try that long preserved virginity, and your quaint honour turn to dust.” This is basically saying that if the woman dies unfulfilled, her honour will be worth nothing, and that in the grave, worms will destroy her body and break any laws that she had kept in the lifetime about her virginity and honour. All there is in the future is the grave, where nothing matters, so what is the point in trying to keep your virginity until you die where it will count for nothing? This is the underlying and fundamental theme of the second stanza.

The third and final stanza merely reinstates the fact that the man loves her, and compliments her with a few positive words so that she will not go off him.

The final poem, ‘Amen’ is in some way alike to and other ways dissimilar to “To his cot mistress”. In the way that it deals with the passing of time it is alike, but how it treats the subject of the passing of time is different. It concentrates more on the positive side rather than the negative.

In the first verse, Rossetti writes:

“It is over. What is over? Nay now much is over truly!” This could sound both positive and negative, for example either a time of strife and hardship is over, or a time of happiness. However, the next lines make clear the meaning:

“Harvest days we toiled to sow for; Now the sheaves are gathered newly”. The image of the hard days of work during the harvest, and the bounty that follows make it clear that time passing in this case is a good thing.

In the second verse though, time takes on a more dismal countenance. This theme most expresses itself when the words

“Lives are finished; time diminished”, are presented. The image of death as a consequence of time shows us that the writer is not always so keen for time to pass. And the words “time diminished”, suggest that the life of everything is existence is shortened, time itself is drawing to a close. This can be interpreted in two ways, either that the world free of time will be good, for example no death or termination of anything. Or that without time nothing can exist, as without time there is no sustenance or particular nature to anything.

More distressing material is created with the line

“Was the fallow field left unsown?” This refers to the many missed opportunities in the past, that are now closed forever due to the passing of time changing everything that made these opportunities possible.

The poem finishes on a more hopeful and reassuring mote however, beginning in the third line of the last verse:

“Spring shall bloom where now the ice is”. This explains that the ever changing time can change things for the better, in this case the passing for cold, barren winter, to the fertile, youthful spring.

Time, then can not only destroy and terminate, it can also create and revitalize.

Choose 3 poems that use the subject of time and explain how and why. (2020, Jun 01). Retrieved from https://studymoose.com/choose-3-poems-use-subject-time-explain-new-essay 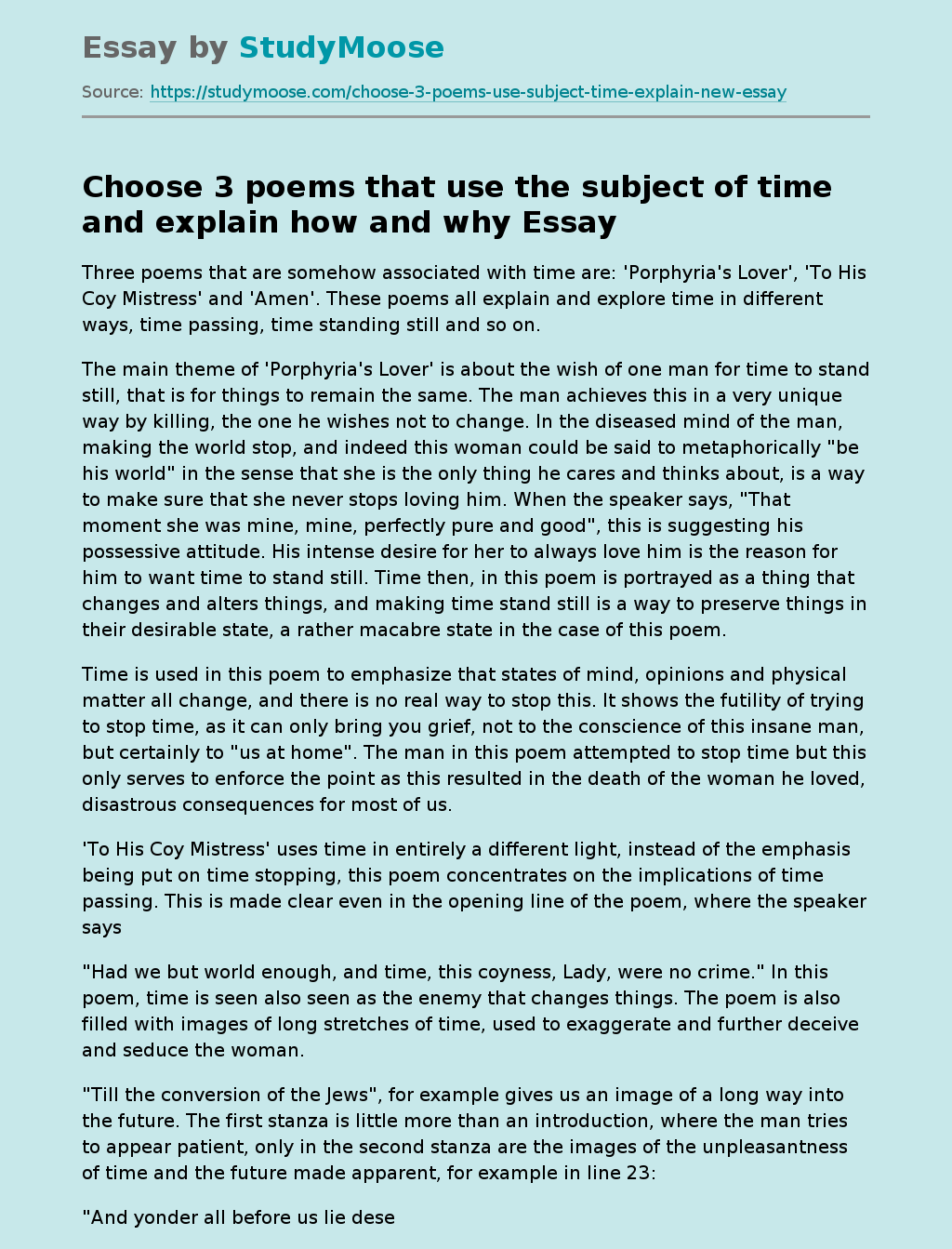