Los Angeles bank loan officer Carl Allen (Jim Carrey) has become withdrawn since his divorce from ex-wife Stephanie (Molly Sims). Routinely ignoring his friends Pete (Bradley Cooper) and Rooney (Danny Masterson), he has an increasingly negative outlook on his life. One day, an old colleague suggests that he goes to a “Yes! ” seminar with him, which encourages its attendants to seize the opportunity to say “Yes! “. Carl considers the option, but subsequently misses Pete’s engagement party. An irate Pete turns up at his house and berates him, telling him that he will end up completely lonely if he does not change his life.

Don't use plagiarized sources. Get your custom essay on
“ Choices And Consequences in Yes Man Movie ”
Get custom paper
NEW! smart matching with writer

Carl decides to attend the seminar and meets inspirational guru Terrence Bundley (Terence Stamp), who publicly browbeats him into making a covenant with himself. Carl reluctantly promises to stop being a “No Man” and vows to answer “Yes! ” to every opportunity, request or invitation that presents itself thereafter. After the seminar, saying yes to a homeless man’s request only leaves Carl stranded in Elysian Park.

Disillusioned, he hikes to a gas station where he meets Allison (Zooey Deschanel), an unorthodox young woman.

She gives him a ride back to his car on her scooter and kisses him before leaving. After this positive experience, Carl feels more optimistic about saying yes. However, he refuses oral sex from his elderly neighbor Tillie (Fionnula Flanagan), which results in falling down the stairs and almost getting attacked by a dog. Seeing the repercussions of saying no, he goes back to Tillie.

While initially disgusted with the thought, Carl is ultimately pleasured by Tillie and thoroughly enjoys his time spent with her.

Carl starts to seize every opportunity that comes his way. He renews his friendship with Pete and Rooney, builds up a bond with his boss, Norman (Rhys Darby), assists Pete’s fiancee, Lucy (Sasha Alexander), attends Korean language classes, joins a Persian dating website, and much more. Saying yes constantly works to Carl’s advantage. He earns a corporate promotion at work and, making use of his guitar lessons, plays Third Eye Blind’s song “Jumper” to persuade a man not to commit suicide.

Accepting concert tickets from a promoter, he sees an idiosyncratic band called Munchausen by Proxy whose lead singer turns out to be Allison. He is charmed by her quirkiness; she is charmed by his spontaneity and the two begin dating. As their relationship develops, Carl and Allison meet at the airport for a spontaneous weekend excursion. Having decided to take the first plane out of town, regardless of its destination, they end up in Lincoln, Nebraska, where they bond more. As they take shelter from rain, Allison asks Carl to move in with her and he hesitantly agrees.

While checking in for the return flight, Carl and Allison are detained by FBI agents who have profiled him as potential terrorist because he has taken flying lessons, studied Korean, approved a loan to a fertilizer company, met an Iranian, and bought plane tickets at the last minute. Pete, his attorney, travels to Nebraska to explain Carl’s odd habits, lessons, and decisions. As she finds out about Carl’s motivational covenant, Allison begins to doubt whether his commitment to her was ever sincere. Deciding that she can no longer trust him, Allison leaves Carl and refuses to return his phone calls.

Carl’s life takes a turn for the worse, and he almost forgets about Lucy’s shower. He manages to arrange a major surprise shower, set his friend Norm up with Soo-Mi (Vivian Bang), a Korean girl, and Rooney with Tillie. After the party, Carl receives a tearful phone call from Stephanie, whose new boyfriend has walked out on her. When Carl goes to Stephanie’s apartment to comfort her, she kisses him and asks whether they can get back together. After Carl emphatically says no, his luck takes a turn for the worse and he decides to end his commitment to the covenant.

Carl goes to the convention center and hides in the backseat of Terrence’s convertible so that he can beg to be released from the covenant. Carl emerges as Terrence drives off, and the startled Terrence collides with an oncoming vehicle. The two are taken to a hospital. After Carl recovers consciousness, Terrence tells Carl that there was no covenant. The starting point was merely to open Carl’s mind to other possibilities, not to permanently take away his ability to say no if he needed to.

Freed from this restraint, Carl finds Allison and admits that he is not ready to move in with her just yet, but that he genuinely loves her. The couple are reunited. At the end of the movie, Carl and Allison are seen donating a truckload of clothes to a local homeless shelter. Cutting to the scene of the “Yes! ” seminar, Terrence is seen walking onstage to several hundred naked audience members. It is implied that the participants have said yes to donating their clothes to charity. 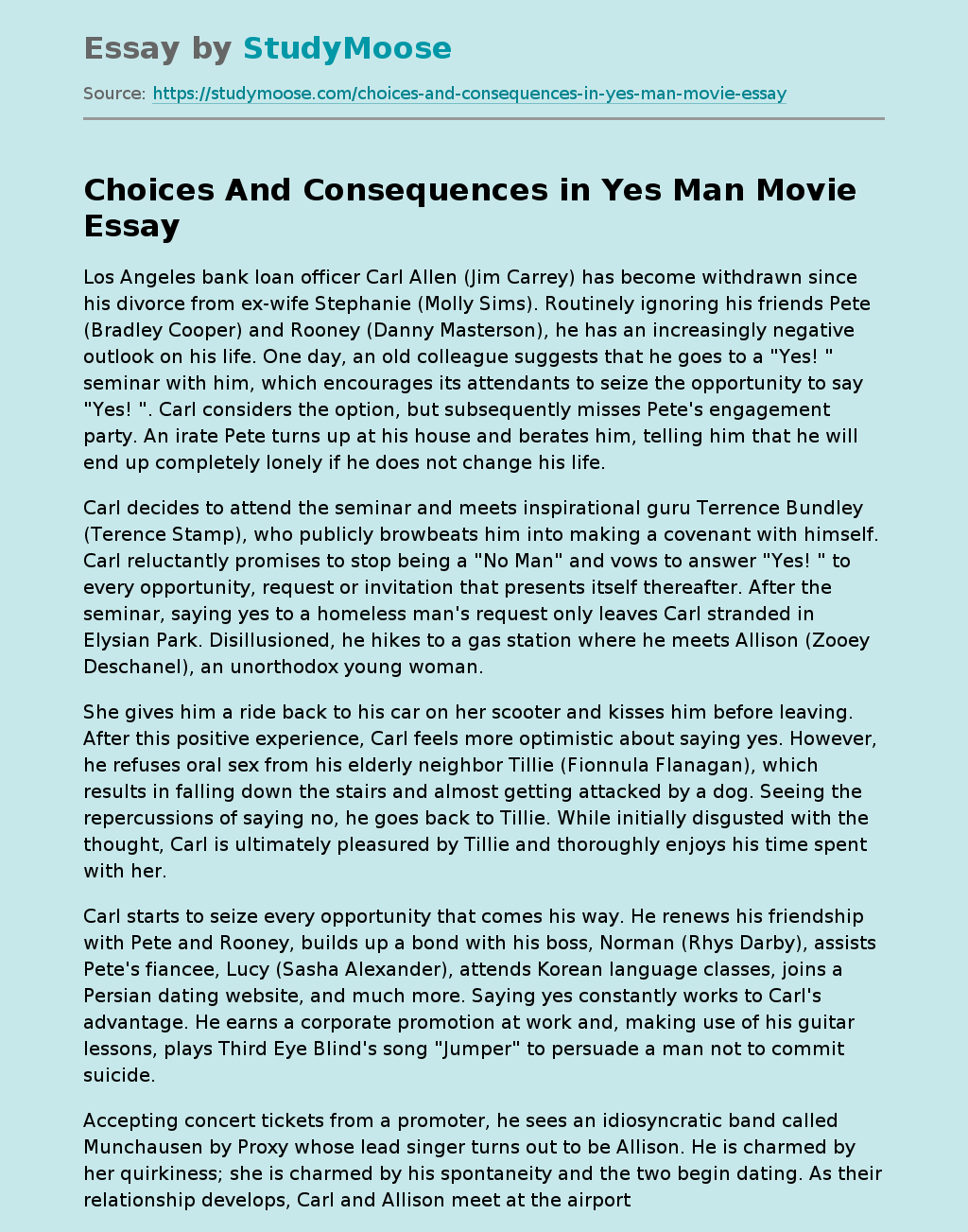