Choice of University and Choice of Course in Australia

After the Bradley report which was written following the review of higher education system in 2008, the Australian government has introduced many policies and financial assistance for this demographic in hope of increasing the participation rates to 20 per cent by 2020 (Department of Education, Employment, and Workplace Relations, 2008, p. xiv). However, despite steady increases in overall tertiary participation, the inequalities still remain. People with low socio-economic status are not as successful in applying or gaining access to more prestigious institutions as those with medium or high socio-economic status are (James, 2007, p.

+84 relevant experts are online
Hire writer
Don't use plagiarized sources. Get your custom essay on
“ Choice of University and Choice of Course in Australia ”
Get custom paper
NEW! smart matching with writer

). It is not only participation at university level that is affected with this imbalance. Significant social differences can be seen across different universities as well as different fields of study (Reay et al. 2001, p. 858). Study by Ferguson and Simpson (2011) has found, and James (2007) agrees, that students with low socio-economic background are not so successful in gaining entry into the courses with more competitive entry requirements like medicine, law or architecture.

These students were more concentrated in courses such as education, nursing, IT and business (James, 2007, p. 7). James (2007, p. 7) believes that the same is true for the high demand universities, where low socio-economic status students hold a share of only 11 per cent of all places. These differences can be somewhat accredited to the geographical location of these more prestigious universities as they are mainly situated in the metropolitan areas. However, there are other factors that contribute to this imbalance more so.

Some experts believe that students who come from disadvantaged backgrounds may not aspire to attend these universities believing that it is not an achievable goal, or they may not perform academically well enough for more competitive courses.

Other studies indicate that it is in fact the psychological factors which create socioeconomic imbalances in higher education participation. This paper will look at rates of participation, aspirations, ability and psychological factors and their affect on the decision making process of low socio-economic status students when it comes to higher education.

It will argue that there is enough supporting evidence to conclude that this demographic does not have a lot of impact on university participation, choice of university or choice of course. While overall higher education participation rates have improved, socio-economically disadvantaged people are least represented group in Australian higher education. James (2007, p. 2) states that ‘social class is the single most reliable predictor of the likelihood that individuals will participate in higher education at some stage in their lives’.

It has to be considered as one of the principal issues in student’s decision making process. According to the English dictionary, to aspire, it means to have a strong desire to achieve something. Consequently, to attend university, an individual needs to aspire to do so. Bowden and Doughney (2010), in their study of secondary students in the western suburbs of Melbourne, have found that those with lower socio-economic status have fewer aspirations to attend university. Instead, they aspire to attend a vocational training institution or gain employment. Difference in spirations among different demographics is mainly influenced by individual’s social systems, such as class, ethnicity, gender, customs and religion (Bowden &amp; Doughney, 2010, p. 119). Furthermore, in his research for the Department of Education, Science and Training, James has found that there is a strong relationship between parental education levels and young people’s educational aspirations (DEST, 2002, p. 51). Bowden and Doughney’s study results are consistent with James’ findings, as well as Bourdieu’s concept of ‘cultural capital’, which Harker et al. (cited in Webb et al. 002, p. 22) defined as ‘culturally valued taste and consumption pattern’. Therefore, it can be said that those who come from low socio-economic background are at a disadvantage when it comes to entering higher education due to the fact that they were not brought up with the idea of attending university. Academic achievement or student’s ability is seen as another important factor that needs to be considered when studying inequalities in higher education. This is because in Australia, university enrolment process relies heavily on individual’s academic achievement.

Student’s academic record is seen as a main way of entry into the university and acquiring all the benefits that come with having a degree. Teese (cited in Ferguson &amp; Simpson, 2011, p. 33) proposed that almost half of low socio-economic status students obtain scores in the lowest academic bands and that only small number of these students receives high academic scores. Ferguson and Simpson conclude that this is due to fewer resources, such as educational, cultural, social and financial, that are available for this group of students, rather than lack of ability.

Cardak and Ryan (2009) have come to the similar conclusion. They have found that academic scores of low socio-economic status students are lower due to the fact that their early educational achievements are also lower in comparison to the more advantaged students and their achievements (Cardak &amp; Ryan, 2009, p. 444). Both Ferguson and Simpson’s and Cardak and Ryan’s studies agree that students with same ability and same academic scores have the same likelihood of attending university regardless of their socio-economic status.

They also agree that the quality of academic results rises with the status. Thus, as they don’t have access to as many resources as their more privileged peers, low socio-economic status students are at a disadvantage when it comes to securing a place at university. Although aspirations and academic ability are very important factors in higher education inequality, it could be said that the psychological factors have most of the influence on person’s decision to attend university.

Students from low socio-economic background are more conscious of the existence of barriers to their entering higher education (Harris, 2005, p. 4) and are not likely to encounter diverse influences that might persuade them to participate in higher education (DEST, 2002, p. 50). James believes that students from this demographic are more likely to be doubtful about their academic ability and achievement and they would possibly be lacking financial support (DEST, 2002, p. 50).

He also states that they have less confidence in parental support and a stronger interest in earning an income as soon as they leave school. ‘The perceptions and beliefs held by people with low socio-economic status can all be regarded as habitus, which is described as ‘embodied predispositions that are learned early in the life of a young person’ (Harris, 2005, p. 4). As they lack role models, it is very difficult for these young people to see university participation as something that is relevant to them or something they could achieve (Harris, 2005, p. ). In their UK based study of working class secondary students, Reay et al. (2001, p. 865) have found that this group of students were choosing universities where they were most likely to fit in, as they felt more comfortable attending such university and where they could find ‘intellectual and social peers’. Psychological factors play an important role in the decision making process due to the emotions attached to them. Low socio-economic status students seem to have a lot more to consider when deciding on their higher education pathway.

As the evidence would suggest, students from low socio-economic background, have very little impact on university participation, choice of university or choice of course at present time. According to the government reports, students from disadvantaged backgrounds are highly under-represented at university level. Thus, higher education in Australia is far from being level playing field for some demographics. The most current review of higher education shows that the participation rates at university in general, as well as different courses and institutions are considerably lower for those ith low socio-economic status. The difference between low and high socio-economic status groups is quite significant, despite the government’s efforts to improve these numbers by implementing new policies and strategies. As discussed in this paper, the reasons for inequality are varied and complex. However, most of the researchers agree that it is the family attitudes that are at the core of the problem. These attitudes have enormous influence on student’s decision making process. However, there is always a possibility for change.

Choice of University and Choice of Course in Australia. (2018, Oct 11). Retrieved from https://studymoose.com/choice-of-university-and-choice-of-course-in-australia-essay 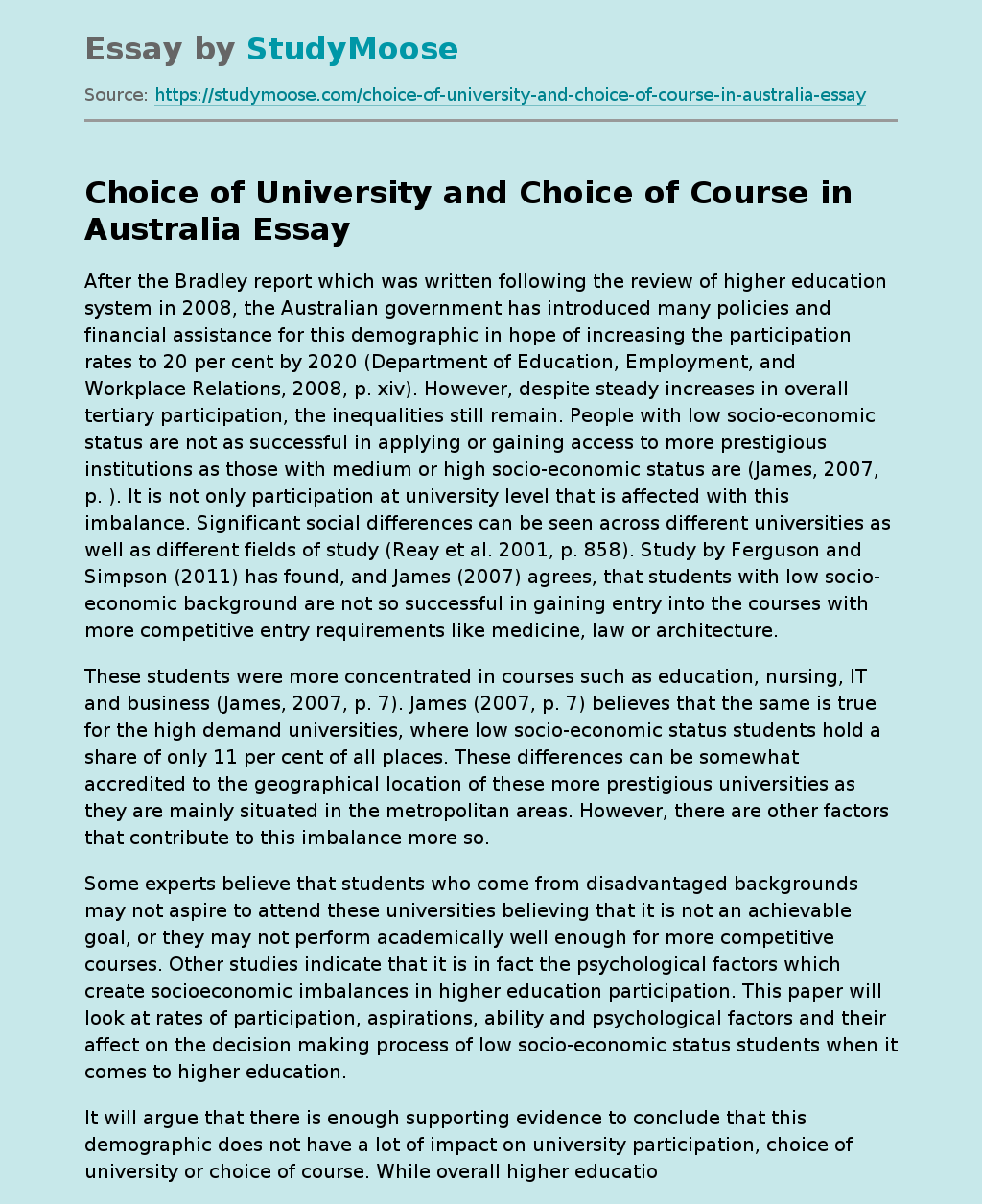