60,000 people from Edinburgh alone failed to turn up at the station for the evacuation; as they had felt that war was not imminent when the sign-up was promoted. The Government could not enforce evacuation, as it would be fruitless; costing more than it would be worth. There would be plenty of angry parents not letting police in, and it seems a bit quasi-futuristic to have the Government forcing children into the backs of big vans whilst their screaming parents can do nothing but look on (or is that Chitty Chitty Bang Bang?).

At the end of the day, it would have done more damage to approval of the Government than good; because it was more likely that the parents would move the kids out when the bombing began anyway. Children not being evacuated presented a problem to the Government, as they could not go to school; as the schools in evacuated areas were shut, and their teachers were away with the evacuated children working at different ‘safe’ schools.

The propaganda and encouraged parents

This meant that a lot of kids were out in the streets playing in the rubble after bombing began, so the Government stepped up the propaganda and encouraged parents that it would be more beneficial to their children to have a quiet, uninterrupted than for them to be wandering the streets alone without anyone looking out for them. The scheme was welcomed by less fortunate people living in the inner-cities; as it was completely free- all they had to do was fill out an application form and get their child to the train station on time; and they were ‘safe’.

The safety of their child weighs over whether or not they trust the Government. They could easily and cheaply send away their children for the duration of the war, in what would not only be a safe experience for them, but also, for many children, an eye-opening one. People living in inner-cities (the most bombed places) were especially embracing of the scheme- “This is like heaven compared to where I come from! ” commented one Mother from Liverpool.

The luxury of sending their children away

Richer families could afford the luxury of sending their children away to a neutral country, like Canada. Canada was the most popular choice amongst the neutral countries, as it was the closest, and least likely to be bombed. This caused some envy amongst the poorer community, as a lot of prolific members of Parliament chose to send their children away to Canada instead of using their own scheme. This again made people decide against using the Government scheme: for some there were just too many question marks around it for it to work.

Being out of contact with a spouse for four years at an important stage of their life, when they start to identify with people around them and lots of significant changes occur based on their surroundings and natural instinct to adapt, if you are away from them then as a parent, I’d imagine you feel pretty low- what if, as a Catholic, your child is taken into a Protestant home, or another similar case? At the end of the day, some people believed that the Government were taking away their right to raise their children as they saw fit; and if they couldn’t go with them to the country; then their children couldn’t go at all.

Little support financially from the Government

For the people who agreed to take an evacuee in, there was a little support financially from the Government, and not much else. From the stereotypes mentioned you might be forgiven for picturing the children evacuated from cities as dirty, snotty trouble-makers who should know better, but some of the hosts weren’t angels. Again, this is only the minority (hence the lack of public outcry against country folk), but one mother innocently sent her child a birthday present, which was gladly received by the host, as she packaged it up again and sent it to her nephew.

Other similar cases occurred, but by and by, the people taking in the children did so with a good heart- their was nothing of any value to gain from the exercise; as the money allowed barely covered the time and energy taken by the host, but everyone was eager to do their bit, and if you were not off on duty or being called into a factory, then taking in a child was a great way to support the war effort: many saw it as directly supporting the parents of the evacuees, who were- mostly- working for the Government in factories or other establishments directly linked to the war effort.

Some, of course, were taken in by the propaganda that the Government had all over the place. One such poster features a picture of an adorable little boy holding a very small bird, and lovingly stroking it as German planes pass over London in the background. “Mrs. Evans saved Johnnie’s life! ” screams the blurb beneath the picture; and it’s all pretty predictable stuff that is carefully worded to make sure people weren’t entirely shocked if they received a ‘problem’ child; and also it carefully words around the fact that they could be more trouble than they are worth.

This is one of the ways that Governments manage to get around the sticky subjects that people throw up at them, by ‘bending the truth’. Yes, the poster admits that Johnnie has caused problems; but the way it is worded makes it seem so lovely and innocent; like a puppy the persistently knocks over expensive vases: “Extra work? Yes, Johnnie’s been a handful!…. but she knows she has done the right thing”.

It makes it seem that if you don’ have an evacuee, then you’re not doing the right thing; which adds extra pressure to the shoulders of anyone considering taking one in- after all, you can always believe the Government, right? A lot of parents were also convinced by the stance taken at the bottom of the left column of the Mrs. Evans source: “… he’s healthier and happier and better-behaved now’.

Whilst this may have been true, I certainly don’t think that the dramatic turn-around the tone used suggests is quite how it happened: nothing can have drastically changed in the six months the obviously fictitious Johnnie had been staying with her. Admittedly, some children were less than enthusiastic to leave; as for them it was nothing more than more school in a different location with mostly the same teachers; but on the whole kids were excited by the prospect of enjoying ‘robbing the orchards’ and playing in open fields so often depicted by books you read in school.

The growing sense of responsibility

Children of an older age were perhaps not as enthused by the prospect, as a growing sense of responsibility comes on you from the age of about 12 (well, personally speaking), and I think that some may have preferred to take their chances and stay in London to help look after their parents- many of whom were working extra shifts at no extra pay to keep factories churning out tanks, weapons and ammunition for the brave-boys in the front line.

Also, it is harder to relate to people at an older age, and perhaps the prospect of being evacuated to somewhere you’ve never been and to someone you have never met may have been very daunting at first- if it’s scary going up to ‘big school’, even when you’re with your friends, what are the chances of people being scared to go and live with someone for four years? High. Kids were scared, but I think that many of them were forced to grow up fast because of the pressure put on their parents shoulders.

They had to learn to cope with worry and the weight of sorrow and care for their parents that they would never normally experience until an older age: I can certainly see myself worrying about my parents in that situation, and it’s likely others did. That is why I think the Government put an age ‘cap’ on funded evacuation; not because they didn’t want older people going, but because it would have caused more problems with children who actually have the intelligence and diligence to escape successfully should they want to: it honestly wasn’t worth the trouble to the Government.

The environment forced upon the city children

The environment somewhat forced upon the city children was not quite the eye-opening ‘experience’ some had labelled it. Many children probably retreated to their natural defensive instinct when faced with ‘scaring’ circumstances; which might have been to cause trouble as a form of self-gratification. Whatever the case, it is certain that some children were very happy in their new lives, and some were not happy.

So then, it seems that there was a divided opinion on whether or not the Government scheme was a success or not: some liked it, justifiably, and some did not, also justifiably. The conclusions that I can draw from this are that people think in different ways: looking at the recent history, whilst to me Mr. Bin Laden is a terrorist, to some members of the Afghan community, he is a freedom fighter and an icon. One mans terrorist is another’s freedom fighter, and one persons well-thought out and implemented scheme to save children is another persons stairway to worry and paranoia. 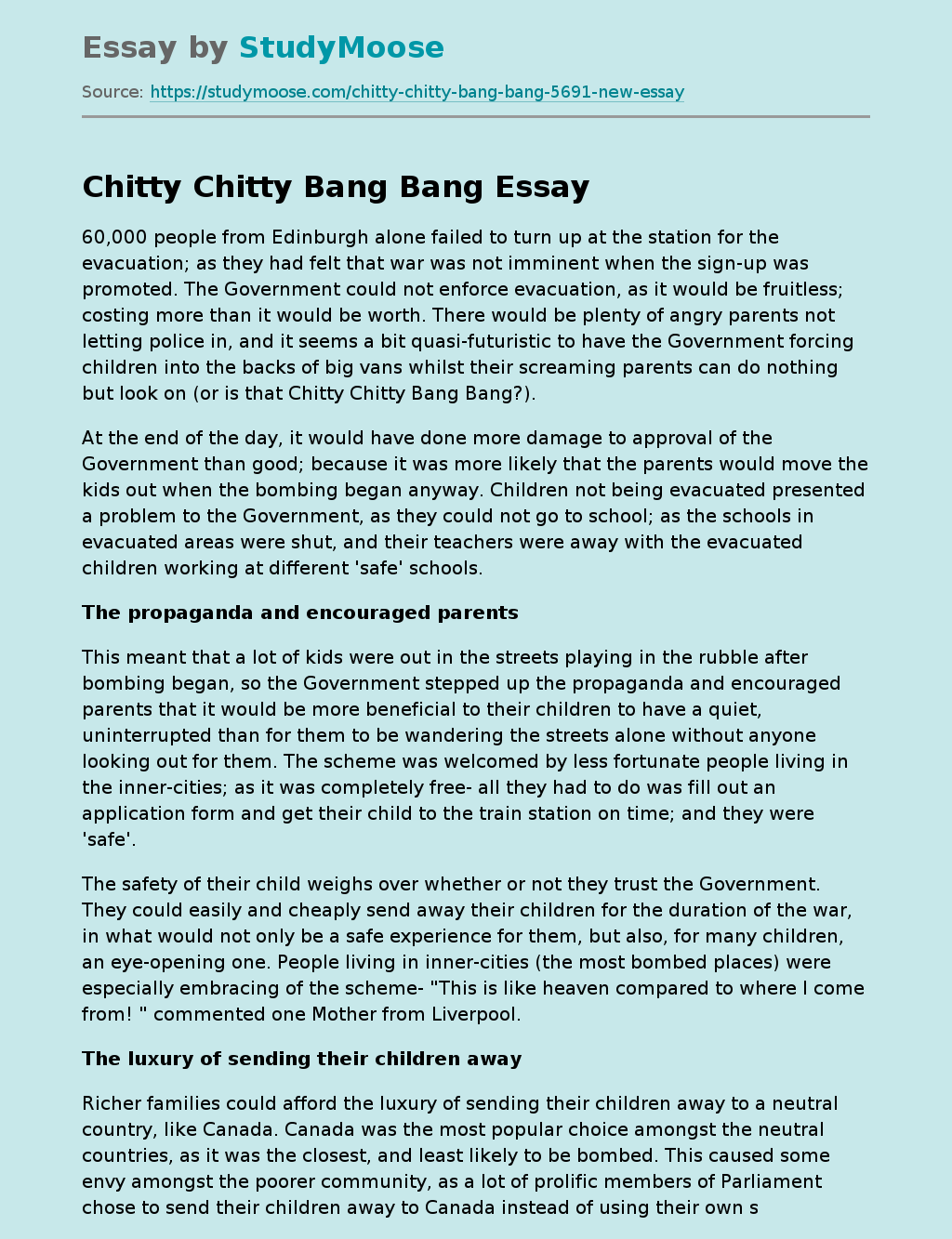