What role does your species have in its ecosystem

Shallow mountain streams are home to the rare and shy Chinese giant salamander, where it has many roles within its ecosystem. It is a symbol of a healthy freshwater ecosystem that humans and other animals depend on (McNeil, 2010). The Chinese Giant Salamander is a key component of the food chain as both prey and predator. Salamanders eat many invertebrates, making sure that the rivers and streams do not become over populated (Mcneil, 2010).

Don't use plagiarized sources. Get your custom essay on
“ Chinese Giant Salamander as an Endangered Animal ”
Get custom paper
NEW! smart matching with writer

These salamanders have an important role in showing the vast biodiversity in China and Japan and losing them decreases biodiversity. Amphibians in general are often referred to as “indicator” species, species that indicate environmental change and vital aspects of safe water (Qiang, 2009).On land, the amphibian serves a purpose of indicating whether the environment is healthy or not. The salamanders do this by breathing through the pores in their skin (McNeil, 2010).

Most of the rivers where the giant salamanders live have becomes very polluted forcing the animals to migrate downstream to breed. Many of them die on their journey downstream or never end up finding clean and safe water to lay their eggs. The ones that do find safe water lay their eggs and decide to return, have trouble getting back as dams have been built or roads running straight through their path. The Chinese Giant Salamander has important significance in discussing evolution of vertebrate from aquatic animal to terrestrial animal as it is a species that lived in the same period with dinosaur, and continuing to survive until now, it is called as “living fossil” (McNeil, 2010). Not much is known about the salamander when it lived with the dinosaurs, as that information in still being found out today.

The Chinese Giant Salamander is just one example of the many amphibians that are vanishing quickly of the face of this earth. Without the amphibians less and less will be known about the health of the environment. This species is very important to not only surrounding animals in their ecosystem but also to humans as the salamanders are telling us that it is time to change our ways because if not, they will die out. The Chinese Giant Salamander shows that whatever wiped out the dinosaurs wasn’t strong enough to kill off all the giant salamanders.

What, if any efforts are being made to preserve your species outside of its natural habitat

The Chinese giant salamander is listed on Appendix I of CITES (Convention on International Trade in Endangered Species). Appendix I states that trade in specimens species threatened with extinction, is permitted only in exceptional circumstances (Amphibian Species Information: Chinese Giant Salamander). Unfortunately, although CITES regulates international trade in the species, it has no jurisdiction over the domestic trade within China which constitutes the primary market. The salamander is also listed as a Class II State Major Protected Wildlife Species in China (Amphibian Species Information: Chinese Giant Salamander). This plan is to protect the habitat of the Chinese Giant Salamander. While it does state that the habitat will be preserved to the best extent, many people break this law as they cut down trees to build houses. The Zhangjiajie Giant Salamander Nature Reserve is one of the largest reserves offered to the salamanders (Qiang, 2009).

China has already set up 22 nature reserves to protect the endangered species. These reserves aim to protect not only the animal itself but also its habitat (Creating a Future for Wild Chinese Salamanders). There are a few organizations that go out and clear the rivers of pollution. There are currently six “Giant Salamander Reserves” in China that are trying to restore the salamanders’ population. Unfortunately, all of these reserves are affected by a shortage of funding and employees, lacking a conservation action plan, poaching, uncertain reserve status, and a lack of protection for salamander habitat. Currently the Chinese Giant Salamander has no recovery plan, but hopefully soon one will be created.

What else could/should be done in your opinion

Chinese Giant Salamanders are seriously misunderstood animals. Even though they are not so attractive as one might think, there is no excuse to destroy their habitats and hunt them to extinction. Many of them are being captured for illegal pets and they are being hunted for their meat which is considered a delicacy in China. Because their meat is rare it is profitable and expensive, making an easy income for poor hunters with large families to feed. Many hunters of the Chinese Giant Salamander spread pesticides into the rivers and streams in order to get the one animal. This creates not only an inhabitable environment for the salamanders but also all the other wildlife that come to those rivers and streams. This pollution also creates unsafe drinking water in some areas as the toxins are carried downstream. In 2004 there were 3200 larvae of Chinese Giant Salamanders, but in 2009 there were zero (Qian, 2009). This shows the enormous impact of pollution in the streams where the salamanders live. They are also hunted for their medicinal uses. In addition to being hunted, Chinese Giant Salamanders are threatened by habitat defragmentation, as China becomes grossly populated and more houses are built. It would be helpful to organize more environmental education to encourage pride in this species as it shows China’s vast biodiversity. It would be helpful to provide better wildlife preserves for these animals.

The establishment of a Chinese giant salamander education center in an area of this species’ range, with a captive breeding facility to provide individuals for a reintroduction program, could provide a much-needed focus for active conservation and monitoring of this species (Qiang, 2009). More organizations and funding should be provided to support the natural reserves protecting these species habitats. Stricter laws and punishment for the hunting of this animal would also ensure the species’ population to grow.

From an environmental perspective, why should your animal be saved

With the absence of the Chinese Giant Salamander, we will lack another natural indicator of whether ecosystems are clean and safe. It is important to know that all amphibians, not just Chinese Giant Salamanders are indicator species. But recent studies have shown that many amphibians are becoming more and more extinct. These species not only provided indicators of the environment but they also are species that were around when the dinosaurs were here and provide a resource for more research (Thomas, 2010). This species eats all the invertebrates that can easily overpopulate an area. Without the Chinese Giant Salamanders mountainous rivers and streams will become overpopulated by many invertebrates and soon exceed the carrying capacity of the ecosystem.

Threatened by factors such as habitat loss, disease, climate change, pollution, and invasive species and over hunting, this species faces challenges that could draw millions of years of survival to an abrupt close if nothing is done (Thomas, 2010). These species react very quickly to environmental change and are able to give a clear response to this change, whether it’s beneficial or detrimental.Their contribution to both traditional and modern medicine has been invaluable as many species have been found to secrete and contain therapeutic compounds that can be used in the treatment of HIV, cancer, heart disease, diabetes, Alzheimer’s, strokes and depression (Meredith, 2010). These large animals need to be saved to ensure the health of the mountainous ecosystems. Without the Chinese Giant Salamander, we will have lost an indicator species, an evolutionary key species, and a valuable medicinal recipe holder. 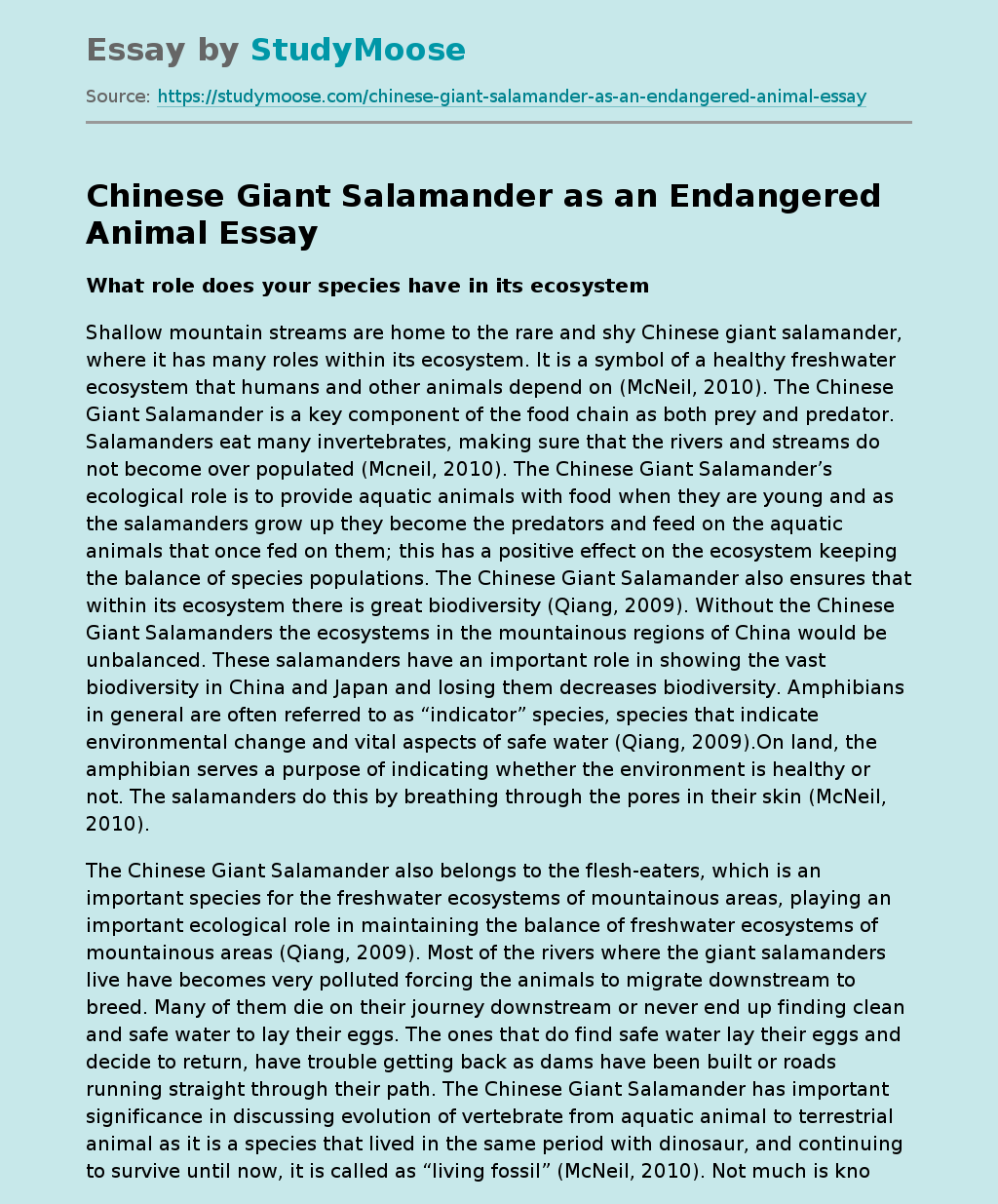