Growing up near a neighbor that was a different culture than mine was insightful. We were the same age and went to the same school. His name is Francis Kimura. It was neat to watch the way he did traditions and to see what he valued. He was adopted when he was ten years old. He also has a sister who was adopted from China, but they do not have biological parents. Even though his adopted parents were American, they still wanted to celebrate and do things in Francis’s culture.

Don't use plagiarized sources. Get your custom essay on
“ Chinese Culture Growing ”
Get custom paper
NEW! smart matching with writer

Traditions in American culture and Chinese culture are unique in their own ways.

When we were growing up I would ask Francis what he did for Christmas that was different from my traditions. In America, we call Santa “Santa Claus.” He told me in China they call Santa “Shen Dan Lao Ren.” In China, only some people have Christmas trees whereas in America almost everyone has a tree in their house.

He told me that most of the decorated Christmas trees he saw were in shopping malls. In Hong Kong, where Francis was born, is one of the cities in China that takes Christmas seriously.

He explained to me that Christmas is a two-day holiday in Hong Kong. “According to CNN, Hong Kong was named one of the top ten places to spend Christmas because of their shopping, food, and displays .” He also told me how Hong Kong is home of a Disney Park that shows an amazing Christmas display.

Just like Americans, Chinese people also have a tradition of going caroling. One of their favorite carols like ours is “Jingle Bells.” Francis explained to me that people like him who celebrated Christians in China attend a Christmas Eve Mass. That is something my family does as well. He also explained to me that his family would eat pork when my family usually eats ham on Christmas Day.

Francis explained to me that he still knew how to speak some of the Chinese languages. When he would speak to me in a different language, it did not make sense to me at all. Chinese is one of the hardest languages to learn and understand. The certain type of Chinese language that Francis speaks is Mandarin which is the dominant Chinese language in China. Francis explained how they used symbols for their words called logograms. They have 100,000 characters but only 2,500 are used in everyday life. English is an alphabetic language and consists of twenty-six letters. “Spelling in English is a phonological-to-orthographic translation. In contrast, Chinese script is non-alphabetical .” In English, we have letters that represent our writing and in Chinese they have symbols. The Cactus video goes more into depth on Mandarin language and the people in the video speak fluent Chinese.

Francis went to school for four years in China before he came to America. Francis said that children began to go to school at age seven or six if they live in major cities. He is from Hong Kong, so he started when he was six since he lived in a major city. They are required to attend three years of kindergarten, six years of primary school, and three to six years of secondary education. Then most of the time there is a couple of years of higher education. In America, some go to preschool for one year and then kindergarten for one year. We attend elementary school for four years. We then move into middle school, with the last four years in high school, and then we graduate. After graduation, some students go to college and some just get jobs right away. “Students born into affluent families generally have a greater access to high-quality education than those from lower-income backgrounds (China Power, 2018).” The same thing goes for America, usually, wealthy families send their kids to private schools which are expensive. Most kids attend public schools, but some families send them to more expensive private schools. Francis just attended a normal school; his family was not considered wealthy.

Francis explained to me the One Child Policy that they have in China. The policy previously only allowed parents to have one offspring. This put a lot of pressure on the one child. This policy was first implanted in the 1970s and in some way made things worse with Chinese families. He explained how if there is only one child then they will receive all the attention and all eyes would be on them. “Chinese children of the post-1980s generation have acquired a reputation for being spoiled and self-centered (McLaughlin, 2013).” When there is only one child, this would cause the child to be spoiled by the parents and grandparents. Francis explained that Chinese families are very close, and all the generations tend to live in the same house. Unfortunately, Francis’s dad abandoned his family when he was young. He shared that he never heard from him and that he relocated to the Philippines. His mom later died of cancer and he was put up for adoption at the age of nine years old. He was then adopted at the age of ten by his new parents and came to America. In America, most families are close but there are some families that don’t get along with everyone. In my family, we are close and keep in touch with everyone.

The other holiday Francis told me about was Easter. He said that this holiday is mostly celebrated by Christians in China. Some of the Chinese have picked up on the western cultures and do Easter egg hunts. He told me when he would walk out of church that people would be selling Easter eggs or giving them away as gifts. He explained to me that Hong Kong, where he is from, is known to celebrate Easter avidly. Just like in America, banks and government departments will be closed in Hong Kong. In China they have special deals on clothes and they decorate just as we do in American malls. Easter falls between March 22 and April 25 in China.

Francis states that his biological family were Christians. As he was growing up, there was a huge expansion with how many people practiced Christianity. Even after he came to America, more and more Chinese people were becoming Christians. “In 2010, the Pew Research Center estimated that there were sixty-seven million Christians in China, roughly 5 percent of the total population, and, of these, fifty-eight million were Protestant, including both state-sanctioned and independent churches .” Now the number of people has grown to one hundred million. Just like America, most people practice Christianity and the number just keeps getting higher and higher. Most of the families I know are Christians and about seventy-five percent of Americans are Christians.

One of the big things about Chinese culture is their food. Francis talked to me about how much he misses authentic Chinese food. Here in America we have many Chinese restaurants. One of the biggest things they do is give out fortune cookies at the end of your meal. Francis said in China they do not give out fortune cookies at the end of meals. The main thing on each menu is many different kinds of chicken. “For chicken, Westerners often prefer white, boneless breast meat. Chinese dishes often utilize the dark meat, connective tissue, organs, and small bones for nutritional value (Rodgers, 2018).” Francis explained that American-Chinese foods tend to be less spicy than the authentic versions in China. He also stated that General Tso’s Chicken is the most well-known Chinese offering. Francis also explained how in China you are expected to know how to use chopsticks. In America, only some people know how to use them and if you don’t know how then you can just use a fork.

Every culture has its own unique characteristics. There are a lot of similarities between China and America. We both celebrate most of the same holidays. Some of our traditions match up and some are completely opposite. Interviewing Francis and knowing him for multiple years has really shown me what Chinese people value and about their cultural differences. Going to Chinese restaurants also gives people who aren’t Chinese some insight into their culture. Chinese and American cultures both live in large countries. Depending on what angles you look at between these two countries, they both have distinct cultures. 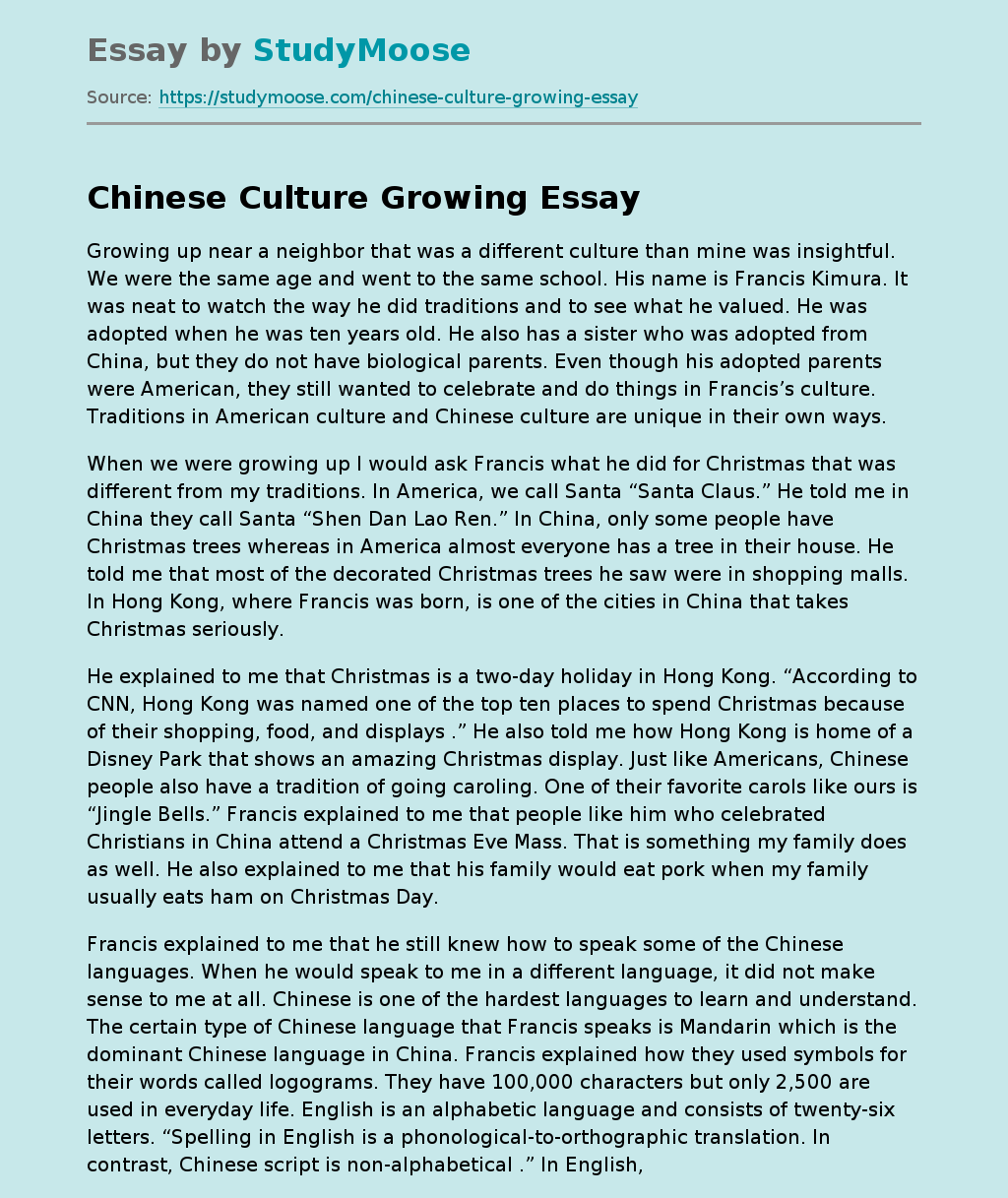