China a Threat to Indian Industry?

4) One-hour technology’ products from China started entering Indian households some years ago. Even though the majority of these products did not succeed in the Indian market due to their ‘inferior’ quality, the Chinese ‘invasion’ of our market is still continuing. The dumping of Chinese-made fans, locks, watches, bicycles, radios, batteries etc is slowly replacing our own products and has become a threat to Indian industry.

5) China herself is one of the victims of the counterfeit products they produce; in the year 2001, fake and low-quality medicines produced in China killed about 192,000 people. 6) Many Indian companies have already shifted their production bases from small Indian towns and villages to China. This has resulted in unemployment for lakhs of workers, pushing them to the brink of starvation. China’s steady entry into our textile, food, information-technology, pharmaceutical, automobile and other sectors may result in the collapse of many Indian industries — in both organised and unorganised sectors.

7) The low rate comes due to the fact that the Chinese Government lends a subsidy ranging from 30 per cent to 100 per cent. The Chinese made goods, of better quality and low rate, have flooded the Indian market in hordes encompassing all types of products – chocolates, toys, garments, computer hardware, and so on, and are finding ready and eager takers among the Indian consumers and this is the factor which has caused a great sense of uneasiness among the Indian industry community.

8) Cheap bulk drug imports from China may soon post a threat to the Rs 20,000 crore domestic bulk drug industry.Ind-Swift Laboratories, a pharmaceutical major based in Chandigarh, halted the production of roxycomycin and arithromycin last month. It is not Ind-Swift alone. Companies like Alembic, Kopran and Torrent are all bearing the brunt of Chinese imports. The consequences are severe on firms producing bulk drugs like azithromicin, clarithromycin, ciprofloxacin, norfloxacin, roxycomycin, cephalosporins and anti-quinolones. As a result, the pharma industry is losing business worth Rs 2,500 crore a year. 9) The price of a battery-operated Chinese car has fallen from Rs 300 two years ago to Rs 60. The fall in prices has caught the fancy of low-income families.

There is no threat to our companies from cheap products imported from China 1) whatever products imported from China unfortunately are mostly below any standards or quality criteria. So the consumer is not very keen to purchase Chinese products in India except for the toys. But if you talk about the fluorescent lamps or electronic products nobody is buying them. 2) In the year 2000, Indian motorcycle makers were a worried lot. A number of them had announced plans to launch dirt-cheap Chinese bikes, fearing that such dumped motorcycles would swamp the Indian market. Today, the fear of Chinese motorcycles no longer stalks manufacturers. 3) Only one company, Monto Motors, launched Chinese motorcycles in the country. In a market, which sells over 2.5 million units a year, the firm claims to have sold around 15,000 bikes so far. 4) Dhoot and other Indian producers did face an initial challenge from Chinese brands like Konka and TCL, but these names failed to make headway.

China has always been compared to India in terms of population and technological advancements. China undoubtedly has a humongous software market, but is definitely not a threat. * India has its own unique power and intelligence. * Indian IT companies have captured Asia and Japan as well. * India is becoming one of the world’s largest internet and mobile user’s country. * India’s mobile market is growing by leaps and bounds. * Most countries prefer employees from India rather than China because of communication barrier. English is spoken by almost all IT industries in India. * India has a large consumer and industrial market, all thirsting for products, with great brands and distribution networks.ForThere is no doubt that India may take many years to have a market like China.

* China has a huge population. Moreover people there are advancing each passing day. * China launches new mobiles, technologies, automobiles almost everyday. * China’s automobile industry is much bigger than India’s. it can therefore serve quality products at lower cost. * China has a string support from the government. Indian IT industries have negligible support. * China launches many products like gadgets etc everyday. Because of this they can sell them at a cheaper rate.China’s market cannot be a thread untie India considers and works on each opportunity that comes its way. It should efficiently make use all possible resources and infrastructure to welcome foreign investment and manpower hiring.<<Previous Next>> Write your comment – Share Knowledge and Experience Discussion Board| Group Discussion- China market – a threat to Indian market

China market is a threat to Indian market as they provide very cheap products with good quality as compared to Indian products. The kind of technologies China uses is much better than the technologies which India uses. Every year huge amount of Chinese items are being imported to India and lot of people are using these items. The industries in china are much bigger and growing everyday. The inventions which is being done in china is much more advanced and then selling of those technology at cheaper rates is what affecting Indian markets.

China a Threat to Indian Industry?. (2016, Dec 24). Retrieved from http://studymoose.com/china-a-threat-to-indian-industry-essay 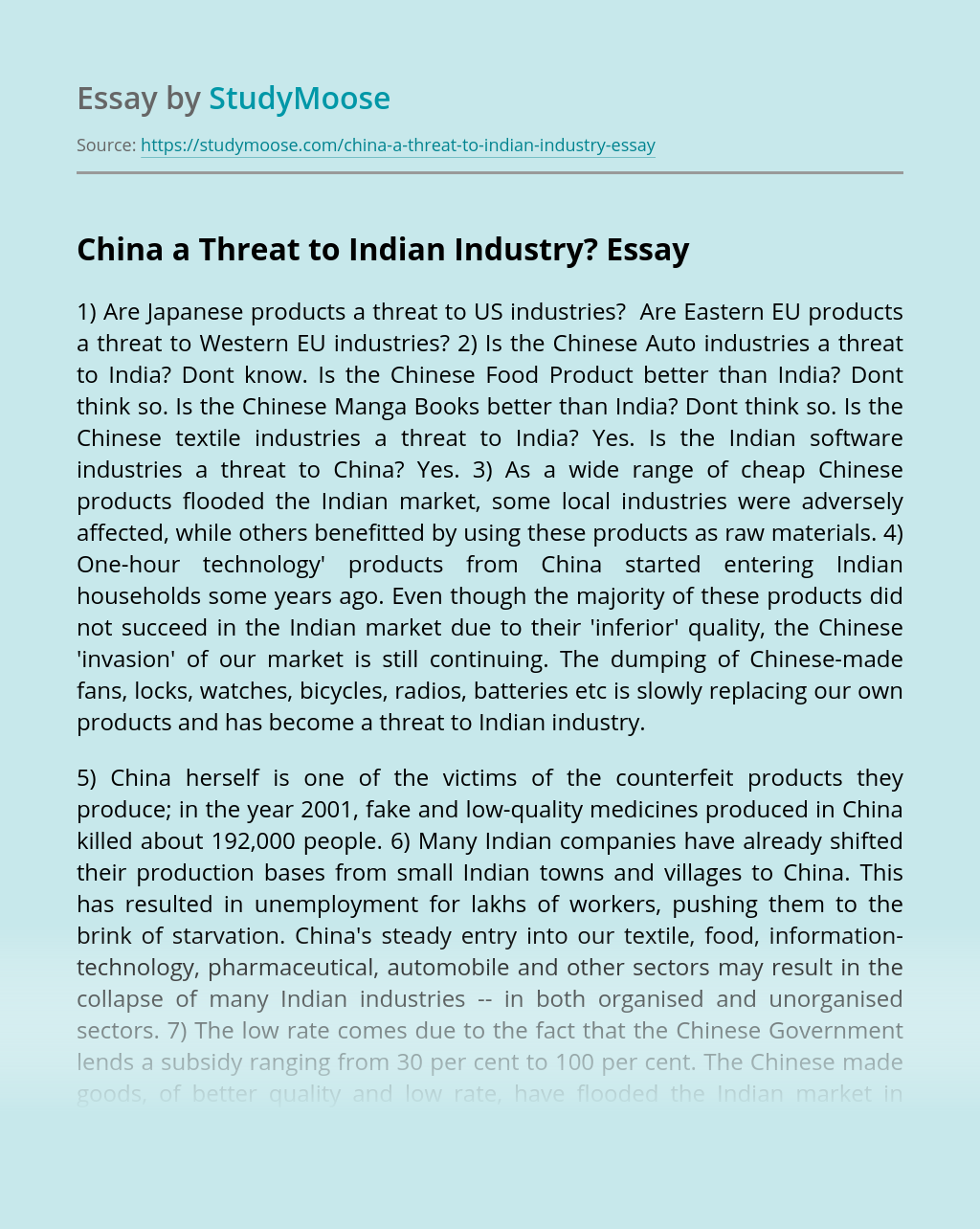 Don’t waste time
Get a verified writer to help you with China a Threat to Indian Industry?
Hire verified writer
$35.80 for a 2-page paper
Stay Safe, Stay Original