The early years of a child’s life are the most important in terms of their general well-being, their emotional and social development, and their physical, intellectual and emotional growth. Children develop at different paces and a very high proportion of what they learn takes place in the first five to seven years of life. What happens in the home is extremely important to development in early childhood. There is also a growing perception that this is a time when children are most open to high quality care and learning experiences.

Don't use plagiarized sources.
Get Your Custom Essay on Children’s development of emotional self-regulation Just from $13,9/Page

Children’s development of emotional self-regulation is important for many aspects of their health and wellbeing, including their ability to tolerate frustration, curbs aggressive impulses, delay gratification, and express emotions in socially acceptable ways. Children who are able to regulate their own emotions are better able to interact with their peers, whereas poor emotion regulation in preschool-aged children has been related to higher levels of externalizing behaviors. Children’s deficits in the ability to self-regulate their own behavior have been linked to rapid weight gain and obesity in middle childhood.

Children who are good in self-regulation will have better relationships with their teachers and classmates.

You will also do better academically. You will have the motivation to enjoy school and the people around you. You will be confident in the way you talk and act in front of people. This skill will help you to grow up with the proper manners and attitude towards other people. You will gain more knowledge in interaction and conversing with different types of people. Parents play an important role in children’s development of self-regulation of emotions in the early years. At birth, infants lack control over their emotional arousal. Instead, infants’ emotional arousal is regulated by their own biological needs and how parents respond to those needs.

Parents comfort infants when they express negative emotions as well as arouse positive emotions in their infants through play and other stimulating interactions. For example, if a one-month-old baby experiences an aversive stimulus, the infant’s crying signals to the parent that he or she is upset. Parents’ actions such as calming or soothing the infant serve to regulate the child’s emotions. Therefore, young infants rely heavily on their parents to regulate their emotions. As children age, they require less assistance in regulating emotions. For example, a four-year-old might self-sooth in response to an aversive stimulus instead of immediately crying.

Throughout the first year of life, infants gradually increase their ability to control their own emotional states and they begin to self-regulate emotions before the second half-year of life. Individual differences in children’s abilities to regulate their emotions are apparent by this time, and whether they intend to or not, parents substantially influence these individual differences. Parents can help their infants and toddlers regulate their emotions by learning to say no from the very start! No means no. If there is one thing I cannot stand and I see very often is when a parent cannot say no to their children. Stop being so damn afraid of your child, let them throw a tantrum, they’ll get over it! I cannot express that enough.

Discipline is the system in which parents guide and teach their children. This word is often confused with the term punishment. The purpose of discipline is to teach children the difference between right and wrong, to incorporate a sense of limits and appropriate behavior. Teaching discipline is a challenging task for parents and caregivers and not one that is taught overnight. It takes many years for most children to be able to achieve self-control. Also, as children grow and develop, so do the types of things that they must be taught.

The method of discipline must grow and change with the child. Caregivers need to be flexible because of changes in children and their environment as children mature and grow. Time out is a very effective form of mild punishment. Time-out literally means time-out from all the things the child enjoys, for example – rewards, parent’s attention, reinforcement, toys, music and all other interesting activities.

Time-out has two major goals. The immediate goal is the stop the problem behavior as quickly as possible and the long-term goal is to help the child learn self-discipline. The good thing about time-out is that it does not emotionally harm the child and it models calm and good behavior on the parent’s part. Time-out works best with children age two to twelve. This method should be considered with certain types of behaviors including impulsive, aggressive, hostile and emotional behaviors. Time-out does not work to get a child to begin doing a behavior, but it is very effective in stopping bad behaviors. Time-out can be used initially with one or two target behaviors and once the parent and child get used to the technique it can be expanded to more problem behaviors.

The child should be placed in time-out for one minute for every year of life. For example a 5 year old would sit in time out for five minutes. You should use a small portable timer to remind the child when the time-out is over. Once the timer rings parents and or caregivers should ask the child why they went to time-out. Once they produce the answer the parent drops the issue and goes about their daily activities as usual. Time-out is not designed to make a child feel bad or humiliated it should be used to instill that when they act a certain way they will be disciplined for it and take those minutes in time-out to help them realize for themselves that what they did was wrong.

Scolding is another common form of mild punishment that should be used by parents. When scolding a child for bad behavior it is important to move close to the child, maintaining good eye contact, being stern, and expressing your feelings while naming the undesirable behavior. It is important to be brief and calm, showing disapproval for the behavior not the child. Another type of mild punishment is natural consequences. Some examples include not wearing an appropriate outfit to school and getting sent to the principal’s office or being careless in not packing a lunch and being hungry at lunchtime. Logical consequences occur for behaviors that do not have natural consequences.

Some examples include not eating all of your dinner and then not having any dessert; or riding the bicycle in the street and having the bike taken away for three days or in the case of my 8 years old daughter, rushing through her homework just so she can play on her iPad or watch TV. I, in return take away her iPad and TV privilege’s until she realizes that taking her time and doing her homework without rushing through it, rewards her with her favorite activities such as playing on her iPad, watching TV, etc. Self-regulation in early development is influenced by a child’s relationships with the important adults in her life. As parents and caregivers, providing the experiences, support, and encouragement that help very young children learn to self-regulate is a critical element in quality care. 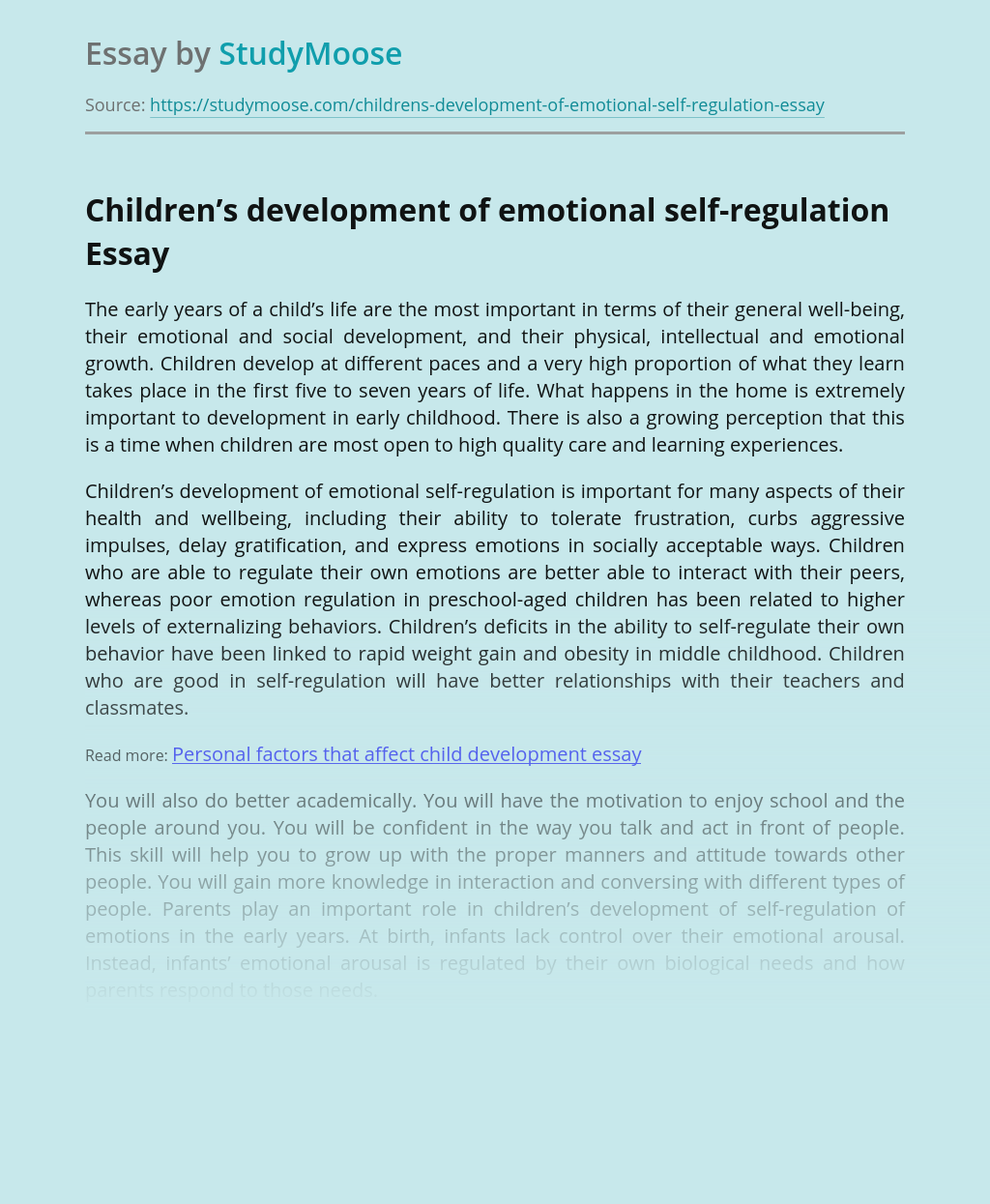 1.What is the name given a child that exhibits ‘’good developmental outcomes despite high-risk status, sustained competence under stress, and recovery from trauma’’ Resilient Children 2 Carter and McGoldrick emphasized the importance of the family life cycle in order to best understand families. According to their theory which stage is called ‘’ Pressure cooker’’? Families...

Making children hate reading is a book by John Halt. It shows the way he teached and his opinion of others and the method he used to help the children with their literacy skills. In John Halt’s book there are some methods he used that I don’t agree with and some that I do agree...

It is important to adopt a balanced approach to risk management which includes taking into account the child or young person’s age, needs and abilities: An activity such as climbing needs to be appropriate for both the age and the ability of the child. Many Adventure Playgrounds and parks have age restricted play areas which...