Children of the City

Amadis ma Guerrero was born in Ermita, Manila in 1941, hegraduated from the Ateneo de manila in 1965 from theUniversity of Santo Tomas in 1959. His short story “Children of the City” is a departure from his usual style. It won the PalancaAwards in 1971.

This story happened in the late 1980’s. Everything occurredin the dark perilous busy streets of Manila. Boulevard . streets of avenida Characterization
-Victor

He is a boy from Intramuros. At the age of eight, he loses hisfather and his mother abandons him for some other man.

Don't use plagiarized sources. Get your custom essay on
“ Children of the City ”
Get custom paper
NEW! smart matching with writer

He ishired as a newsboy by his uncle and starts his life on the streets.Innocent and young, he ponders on the menace and vices of hiscolleagues and the people all around him. -Victor’s Dad

A good-natured man and a loving father to Victor, he was apart of a worker’s strike. The man loved his son dearly and hisdeath brought a huge blow to Victor. -Victor’s Mom

She took her husband’s death grievously. But later on,she ignores Victor, becomes a prostitute, then leaves Victor to hisUncle to go away with her new lover. -Tio Pedring

Victor’s uncle, he adopted victor after the leaving of hissister. He forces victor to become a newspaper boy. -Nacio
He is a newspaper boy. He was victor’s new friend. Thoughfull of cruel vices, Victor took his death as another major loss.

Summary
The father of the boy Victor got involved in a strike.

He actsas though it was nothing and takes Victor to night walks aroundManila. He takes Victor’s mind off vices and promises Victor abright future someday.One day, during the strike. Victor’s father was shot dead inthe heart. His wife mourned greatly and his son was subdued.

Thewife began to disappear late at night and come home early dawn.She refuses to take care of Victor. And then, she comes homewith some goon, telling that the goon will be Victor’s new dad.Victor didn’t like the stranger at all. As often as possible, he triesto stay out of his mom and her lover’s way.And then, Victor just woke up with his mother and the mangone. His Uncle Pedring introduces to take care of him. Herecruits Victor to a newspaper job. The man does not treat Victorwell unless he brings home money.During his job, Victor meets Nacio.

Nacio was also anewspaper boy. He taught Victor various tricks in newspaperselling. They become close friends.Victor’s job grew prosperous. Soon, his “Boss” starts to trusthim with a ration of 20 papers a day. He becomes contented withhis life until-Nacio was run over a car. He was dead. Victor grieved for hisfriend just like the way he did with his father. He gets beaten upwith the other kids.His colleagues beat him up whenever he refuses to smoke orsay curse words… Victor was defiant at first. But after long, tiredof being tossed around like a stray dog-Victor finally gave up.

The story ended when the author realized how cruel theworld is…”… And Victor, swirled the life of the city: this city, flushed withtriumphant charity campaigns, where workers were made to signstatements certifying they received minimum wage, wheremillionaire politicians received Holy Communion every Sunday,where mothers taught their sons and daughters the art of begging, where orphans and children from broken homes slept onpavements and under darkened bridges, and where best friendsfell out and betrayed one another.”

This world is mean indeed… people become the way theyare, not because of fate, but of how the people around themrevolve. Children of politicians study at universities and tend toget spoiled. Whereas, orphans are shunned downwards and areleft to fill the streets and crawl under the powerful’s shoes. The story shows us the way life turns and how what webecome rests upon our defiance and decisions. This has been ahackneyed phrase through the decades but it portrays some kindof truth.

Children of the City. (2016, Nov 12). Retrieved from https://studymoose.com/children-of-the-city-essay 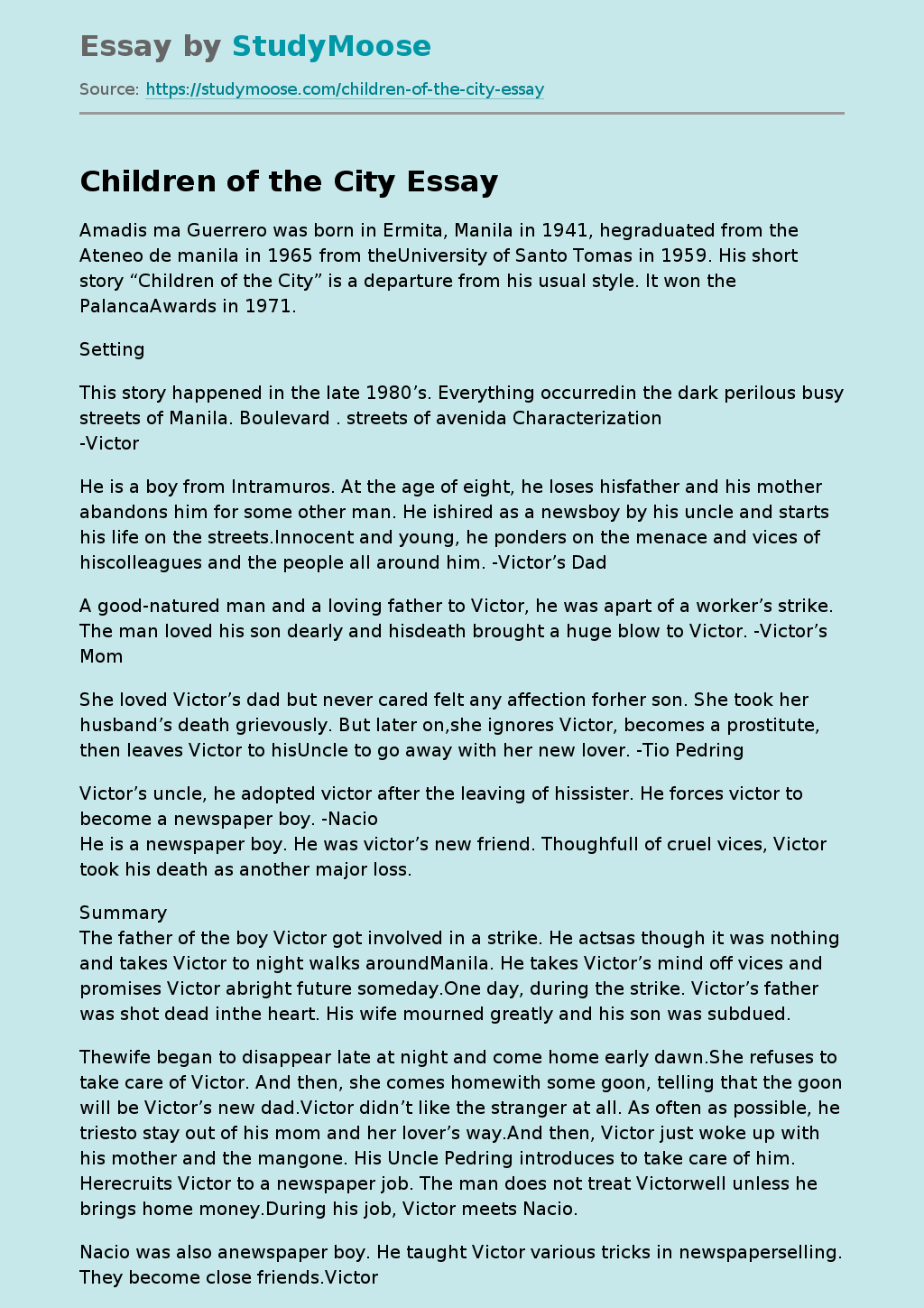