Jose Rizal had many beautiful memories of childhood in his native town. He grew up in a happy house, ruled by good parents, bubbling with joy and sanctified by God’s blessing. Rizal is industrious, hospitable and friendly folks impressed him during childhood years. And the happiest period of Rizal’s life was spent in this lake shore of Laguna de Bay.

Earliest Childhood Memories
The first memory of Rizal, in his infancy, was his happy days in the family garden when he was 3 years old.

Don't use plagiarized sources. Get your custom essay on
“ Childhood Years in Calamba ”
Get custom paper
NEW! smart matching with writer

He was a frail, sickly and undersized child so he was given tendered care by his parents. At the age of 3, watched from his garden cottage, culiauan the maya, the marta capra, the pipit and other birds listened “with wonders and joy” to their twilight songs. Daily Angelus prayer

Moon linights at the Azotea after the nightly rosary. The Aya related to the Rizal children (including Jose) many stories about the fairies. When Jose did not like to take his supper the Aya would threaten him that the Aswang, the nuno, the tikbalang, or terrible bearded or turbaned Bombay would come to take him if he would not eat his supper.

The noctural walk in the town.

Calamba the Hero’s Town
Calamba was a hacienda town which belonged to the Dominican order, which also owned all the lands around it. It is a picturesque town nestling on a verdant plain covered with irrigated rice field and sugar lands. A few kilometers to the south loom the legendary Mt.

In the middle of the lake towers the storied island of talim and beyond it towards the north is the distant Antipolo, famous mountain shrine of the miraculous and Good Voyage. Rizal loved Calamba with all his heart and soul

Earliest Childhood Memories
The first memory of Rizal, in his infancy, was his happy days in the family garden when he was 3 years old He was a frail, sickly and undersized child so he was given tendered care by his parents At the age of 3, watched from his garden cottage, culiauan, the maya, the marta capra, the pipit and other birds listened “with wonders and joy” to their twilight songs Daily Angelus prayer

Moonlights at the Azotea after the nightly rosary.
The Aya related to the Rizal children (including Jose) many stories about the fairies. When did not like to take his Supper the Aya would threaten him that the Aswang, the nuno, the tikbalang, or terrible bearded or turbaned Bombay would come to take him away if he would not eat his supper The nocturnal walk in the town.

The Hero’s First Sorrow
Concha (Conception) the younger sister of Jose was died of sickness in 1865 when she was only 3 years old. Jose who was very fond of her, cried bitterly at losing her. The death of little Concha was first sorrow of Jose.

Devoted son of the Church
The scion of a catholic clan, born and bred in a wholesome atmosphere of Catholicism, and possessed of an inborn pious spirit, grew up a good Catholic.

The Story of the Moth
Story about the disobedient moth which left a deep impression to Rizal’s mind “to sacrifice one’s life for it”, meaning for an ideal, is “worthwhile”.

Artistic Talents
Since early childhood Rizal revealed his God given talent to art. At the age of five (5), he began to make sketches with his pencil and to mould in clay and was objects which attached his fancy.

When Jose was mere boy in Calamba, a religious banner which was always used during the fiesta was spoiled. Upon the request of the town mayor, he painted the oil colors a new banner that delighted the town folks because It was better than the original one.

Jose had soul of a genuine artist. Rather an introvert child, with skinny physique and sad dark eyes, he found great joy looking at the blooming flowers, the ripening fruits, dancing waves of the lake, and the milky clouds in the sky, listening to the song of birds, the chirping of the cicadas and murmuring of the breezes.

At the age of six (6), one of interesting anecdote about Rizal was the incident about his clay and wax image. He spent more time making images rather than to participate with his siblings games. He kept silent as they laughed and Jose Rizal told them “All right laugh at me now! Someday when I die, people will make monuments and images of me!

First Poem by Rizal
At the age of eight (8), Rizal wrote his first poem in the native language entitled “Sa Aking mga Kababata” (To my fellow children). This poem reveals Rizal’s earliest nationalist sentiment in poetic verse. He proudly proclaimed that the people truly loved their native language will surely strive for liberty. And that tagalog is the equal of Latin, English, Spanish, and any other language.

First Drama by Rizal
After writing a poem he wrote his first dramatic work which was a tagalog comedy and it was purchased by a gobernadorcillo of Paete for two (2) pesos.

Rizal as Boy Magician
Since early manhood Rizal had been interested in magic. With his dexterous hands, he learned various tricks, such as making a coin appear in his fingers and making a handkerchief vanish in thin air.

He entertained his town folks with magic-lantern exhibitions, this consisted of an ordinary lamp casting its shadow on a white screen and be twisted his supple fingers into fantastic shapes, making their enlarged shadows on the screen resemble certain animals and persons.

Lakeshore Reveries
During the twilight hours of summer time, Rizal accompanied by his pet dog (usman), used to meditate the shore of Laguna de Bay on the sad conditions of his oppressed people. He grieved deeply over the unhappy situations of his beloved fatherland. The Spanish awakened his boyish heat a great determination to flight tyranny.

Influence on the Hero’s Boyhood

2. Environment Influence
a. The scenic beauties of Calamba and the beautiful garden of Rizal Family stimulated the inborn artistic and literary talents of Jose Rizal b. The religious atmosphere at his home for fortified this religious nature. c. His brother, Paciano, instilled in his mind the love for freedom and justice. d. From his sisters, he learned to be courteous and kind to women. e. Tio Jose Alberto to inspire him to develop his artistic ability. f. Tio Manuel courage him to develop his frail body by means of physical exercise. g. Father Gregorio intensified his voracious reading of good books. h. Father Leoncio Lopez fostered Rizal’s love for scholarship and intellectual honesty. i. The sorrows in his family contributed to strengthen his character. j. The Spanish abuses and cruelties which he witnessed in his boyhood awakened his spirit of patrionism and inspired him to consecrate his life and talents to redeem his oppressed people.

3. Aid of Divine
a. Rizal was providentially destined to be pride and glory of his nation b. God had endowed him with versatile gift of a genius, the vibrant spirit of a nationalist and the valiant heart to sacrifices for a noble cause. 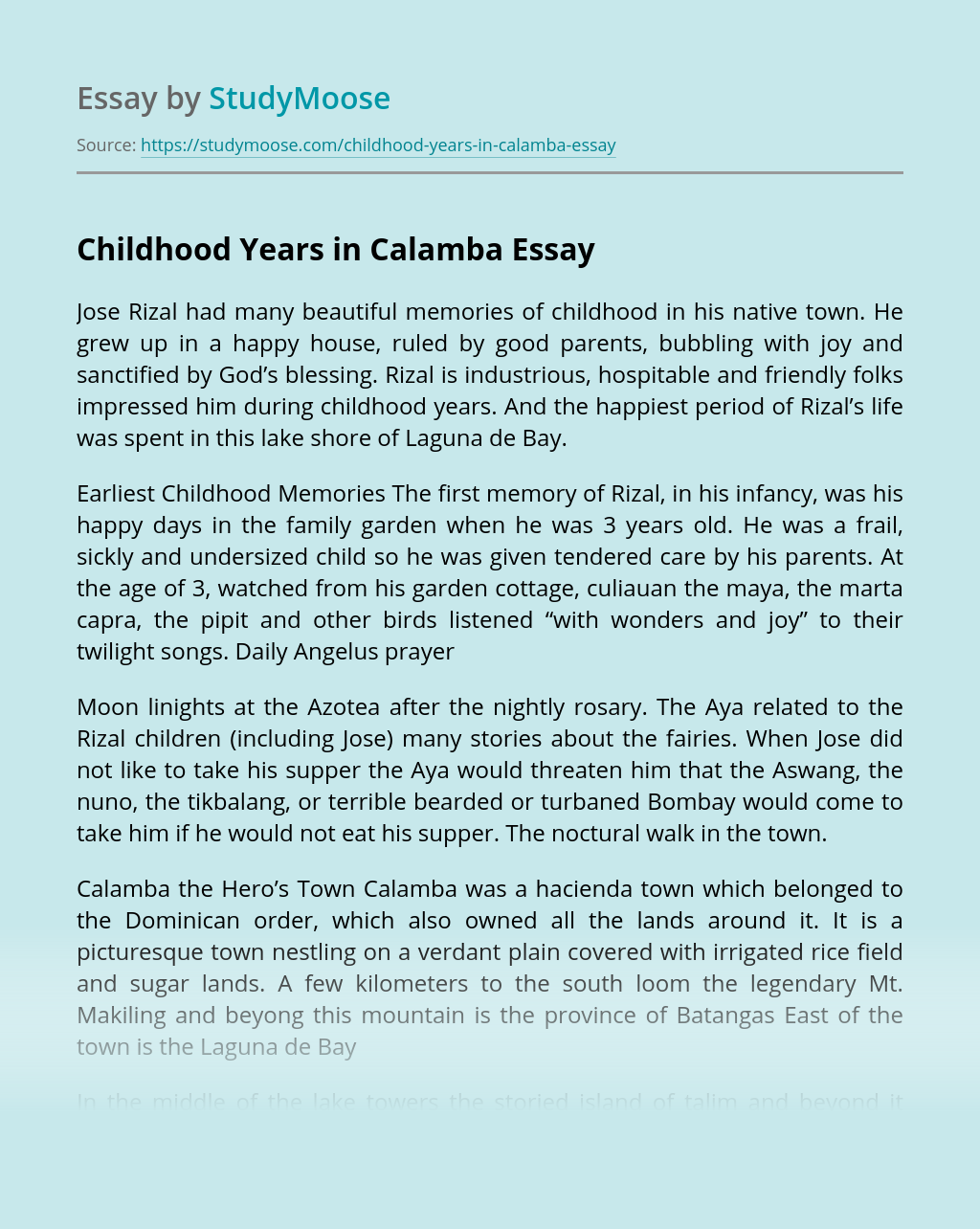