Bowlby (1951) believed that the type of quality of relationship that individuals have with their primary caregivers provides the foundation for adult relationships by forming an internal working model hat acts as a template for all future relationships. This is the Continuity Hypothesis, the belief that similar relationships will occur as an adult.

Don't use plagiarized sources. Get your custom essay on
“ Childhood experiences ”
Get custom paper
NEW! smart matching with writer

Therefore, someone who is securely attached as an infant will have similar relationships throughout life.

This is Theory is supported by the study of HAZAN & SHAVER (1987). The experiment consisted of a ‘love quiz’ questionnaire that was published in a newspaper. The questions were designed to classify and individual as one of Ainsworth’s attachment type. The questionnaire also included q’s which aimed to assess the pps childhood relationships with their caregivers, and their romantic experiences in their life.

Those with insecure-resistant were more likely to feel anxious in adult relationships and find it hard to get as close to them as they wanted. As a result they concluded that relationships formed with parents during childhood affect relationships in adulthood. However this study does have issues with reliability as it is based on self-report data which is subjective. Furthermore the data is also retrospective further reducing reliability of the study. Also because the study relied on volunteer sampling, so the sample they have may not be truly representative of the population.

However there are contradicting results in experiments done on the effect of attachment type on adult relationships as STEELE et al. (1998) found a small correlation of 0.17 between having a secure attachment type in childhood and early adulthood. This is also true for the study of RUTTER et al. (1999) who reported that individuals without secure attachments to their parents went on to secure stable relationships contradicting the findings of HAZAN & SHAVER.

COLLINS VAN DULMAN (2006) supports this theory and also suggests that relationships with peers give individuals the opportunity to learn behaviours and expectations involved in adult relationships. Supporting the idea that experiences during childhood and adolescence influence the quality of adult relationships.

Furthermore it is thought that children who have witnessed unstable relationships between their parents and others around them will be influenced by this and thus influences their adult relationships. Studies have shown that people who experienced parental divorce during childhood have more negative attitudes towards relationships than those who didn’t experience parental divorce. These negative attitudes include being less optimistic about having a successful relationship, feeling less trustful of partners, having more favourable attitudes towards divorce and more negative attitude towards marriage. SILVESTRI (1991) supports this notion as he found that having divorced parents significantly increased an individuals own chances of getting divorced. JOHNSTON and THOMAS provide an explanation for this suggesting that this could be because individuals model their behaviour on their parents behaviours.

Linking back to bowlbys theory that children form an internal working model as to how relationships should be whilst not only being in a dysfunctional relationship themselves but observing these dysfunctional relationships too. However this theory cannot be generalised to the entire population as there are a large amount of people who experience divorce during childhood but still go on to have successful adult relationships. Thus proving that their must be many other factors that can influence the long term effects. Also research into this area of how divorce effects a child’s adult relationships can be used to minimise the effect of divorce on children.

To conclude it seems that there is sufficient evidence to support bowlbys theory that early childhood experiences both being involved in relationships and observations of parents to does to some extent play a role in affecting their adult relationships. However due to the causal nature of much of the studies related to this area means that it can be difficult to establish what the true cause and effects are of early childhood experiences or whether it is other factors that are contributing to this, supported by the contradicting results of many studies in this area. 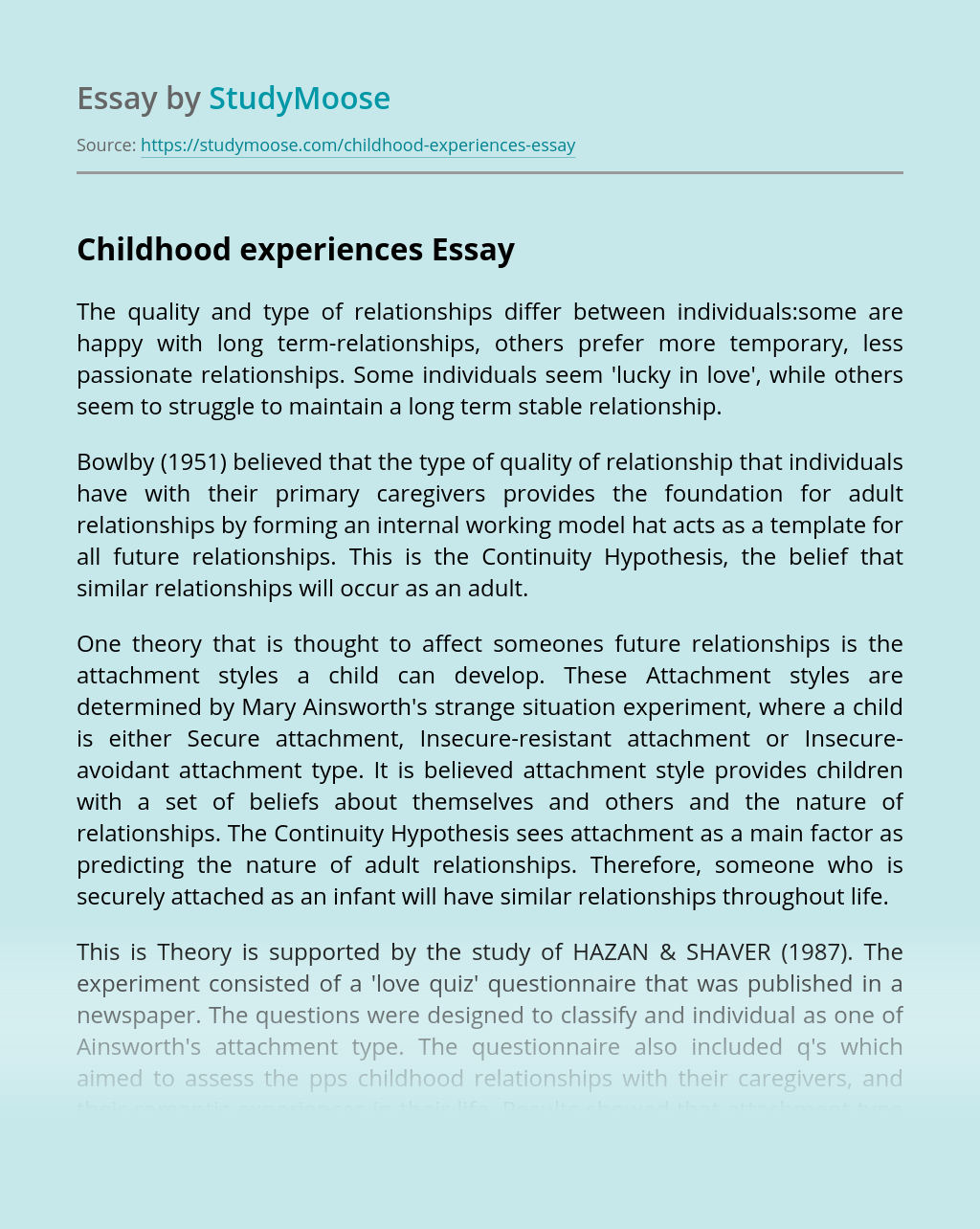