Child Labor Since the Industrial Revolution

Child labor has changed dramatically since the time of the industrial revolution. Teens everywhere can now have part time jobs that aren’t hazardous to their health and follow strict child labor laws. Although pretty much all our ancestors weren’t so lucky. During n the Industrial Revolution there were no child labor laws. The factory owners just saw it as jobs that could be done by anyone, and grown men would not stand for such low pay so who better than children who are just as happy with pennies and nickels.

Don't use plagiarized sources. Get your custom essay on
“ Child Labor Since the Industrial Revolution ”
Get custom paper
NEW! smart matching with writer

Children working in factories didn’t just have to deal with low income they also had horrid working conditions, health hazards, low wages, long hours worked per day, and almost every day worked per week. Child Labor had existed long before the Industrial Revolution; children were usually forced to work in family farms or as servants. But it wasn’t until the Industrial Revolution that children were forced into factories with horrid working conditions.

These kids would often work 10-12 hours a day, and also had to deal with constant abuse from superiors who demanded faster production.

Children as young as four were employed to work in coal mines. Conditions were dangerous very dangerous in the coal mines, many children developed lung cancer and other diseases and died before the age of 25, while others died from gas explosions. Some children were employed as “scavengers” by cotton mills, their jobs would be to climb under machinery to pick up cotton, some died from being crushed under the machines, and some lost hands or even limbs.

After reports of these atrocities became widespread politicians and the government tried to limit child labor by law, but factory owners resisted; some felt that they were aiding the poor by giving their children money to buy food to avoid starvation, and others simply welcomed the cheap labor. The English governments’ efforts only led to the limit of 10 hours of work per day for children but working conditions were still atrocious. In the 21st century there are many regulations that have drastically improved safety and limits on child workers in the U. S.

The minimum age for “Non-Hazardous” work is 14, and for agricultural work that age is dropped to 10-11 years old with parental consent on farms not regulated by minimum wage requirements, and 12-13 years old just with parental consent. The laws on today’s limit on hours of employment are as follows: No work during school hours, on school days: 3 hours/day, 18 hours/week maximum, when school is out of session: 8 hours/day, 40 hours/week with at least 30 minute s of break time included each day.

These laws helped to keep hours of work limited to ensure more time for school and other activities. There have also been laws for minimum wage that a teen can receive for work. Federal Minimum is $7. 25 per hour as of 7/24/09 youth minimum is $4. 25 per hour for employees under 20 years of age during their first 90 consecutive calendar days of employment with an employer. In today’s working world hazards teens will face while working are limited to just slipping on wet floors, minor burns, and small cuts. Granted this is if most safety precautions are carried out and it was accidental.

So far no child worker has been exposed to any harmful diseases while working, during the 21st century. The managers overseeing children working are very helpful and are punished by law if they harass or physically injure any employees. Since the Industrial revolution the ages of child workers have changed from as young as 4 to, at the very least, 10. Child workers today are no longer allowed to work 12 or 14 hours a day, instead there are strict laws that allow for a thirty minute break everyday and no more than 18 hours of work per week.

Minimum wage has been changed from pennies and nickels to $7. 25 since the Industrial Revolution. Teems working nowadays are ensured by workers compensation and serious injuries are rare because of safety precautions taken; as opposed to frequent diseases, serious injuries, and even death that were reported in the Industrial Revolution. Thankfully many changes have ensured the health and safety of child workers today. I am personally thankful for these laws and regulations because as of next week I will be working at Panera Bread and it is nice to know that I am safe as a working teen.

Child Labor Since the Industrial Revolution. (2016, Oct 02). Retrieved from https://studymoose.com/child-labor-since-the-industrial-revolution-essay 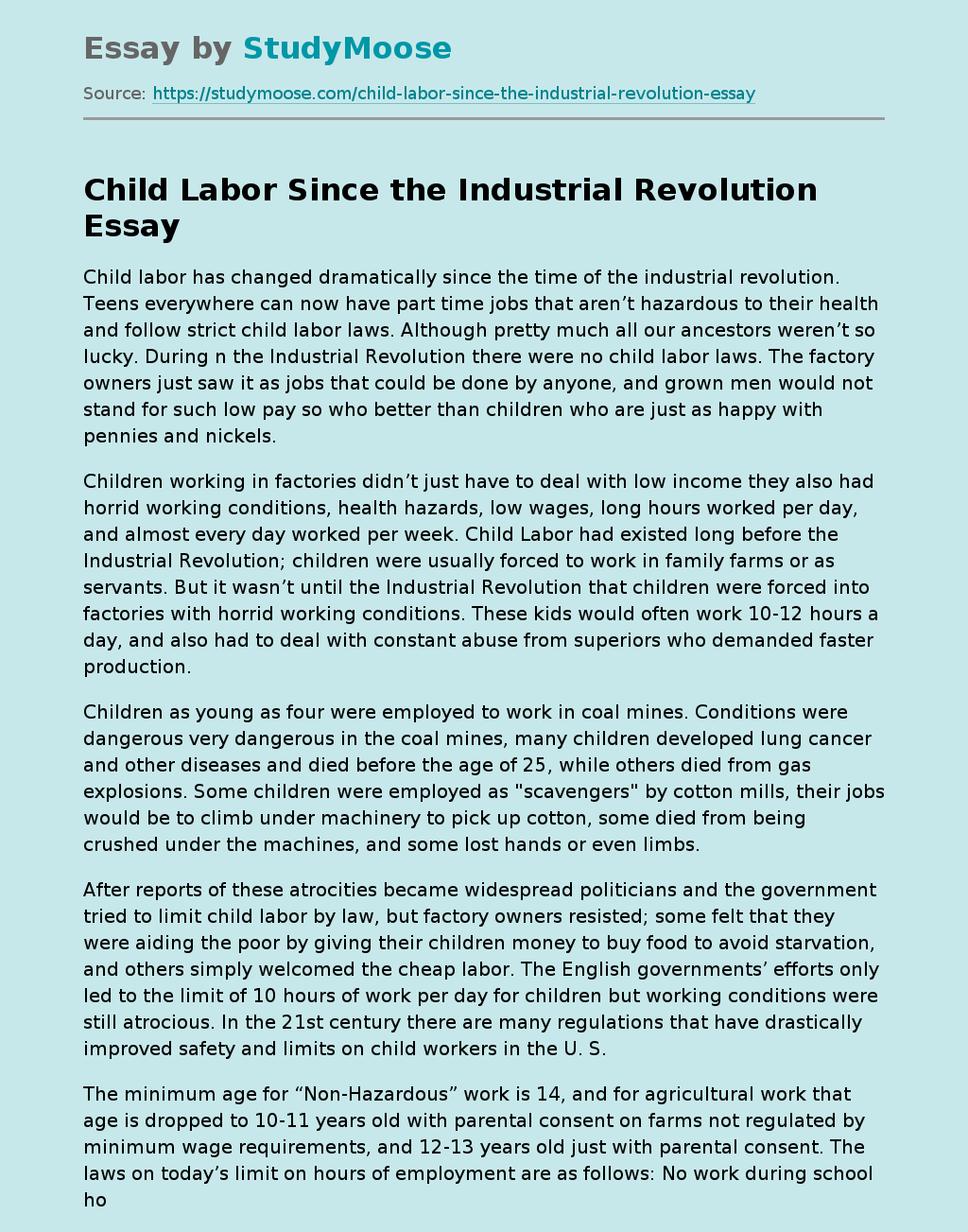