1. What might Semmelweis now propose as an explanatory story? Answer: Swmmelweis’ explanatory story might be that there is some sort of infection linked to the death of women and his friend.

2. How could Semmelweis test his new hypothesis?
Answer: He could test the women and his friend that died for infections to see if that is the cause of death.

2. How might Semmelweis revise his original hypothesis or his experiments to gain additional information? Answer: Semmelweis could possibly observe if that is what the female physician ward was doing all along to reduce the rates of mortality among the women they were treating. He may also not only do hand washing but begin to sanitize all equipment before patients are treated.

1. When presented with what appears to be unequivocal evidence in support of hand washing, why might Semmelweis’ colleagues have dismissed his ideas? Answer: Semmelweis might not have had much evidence to back up the fact that hand washing alone would slow the mortality rate. There was still women dying from childbirth and for those few women there was no explanation.

2. How else might Semmelweis have approached the problem of disseminating his research findings in order to ensure their acceptance? Answer: He could have studied into the hand washing longer and found other things that supported the mortality rates of the few that were dying. He could have also had other people who believed that hand washing was the solution to help support and explain his ideas to his colleagues.

3. What, if any, role did serendipity play in Semmelweis’ story of childbed fever? Answer: I do believe that serendipity did play a role in the story of childbed fever because if Semmelweis’ friend would have never “accidentally” cut his hand while performing the autopsy from a women who died from the childbed fever and showed the similar symptoms, the research might not have been studied as fast or might not have come up with a solution to the problem of infection (sepsis). 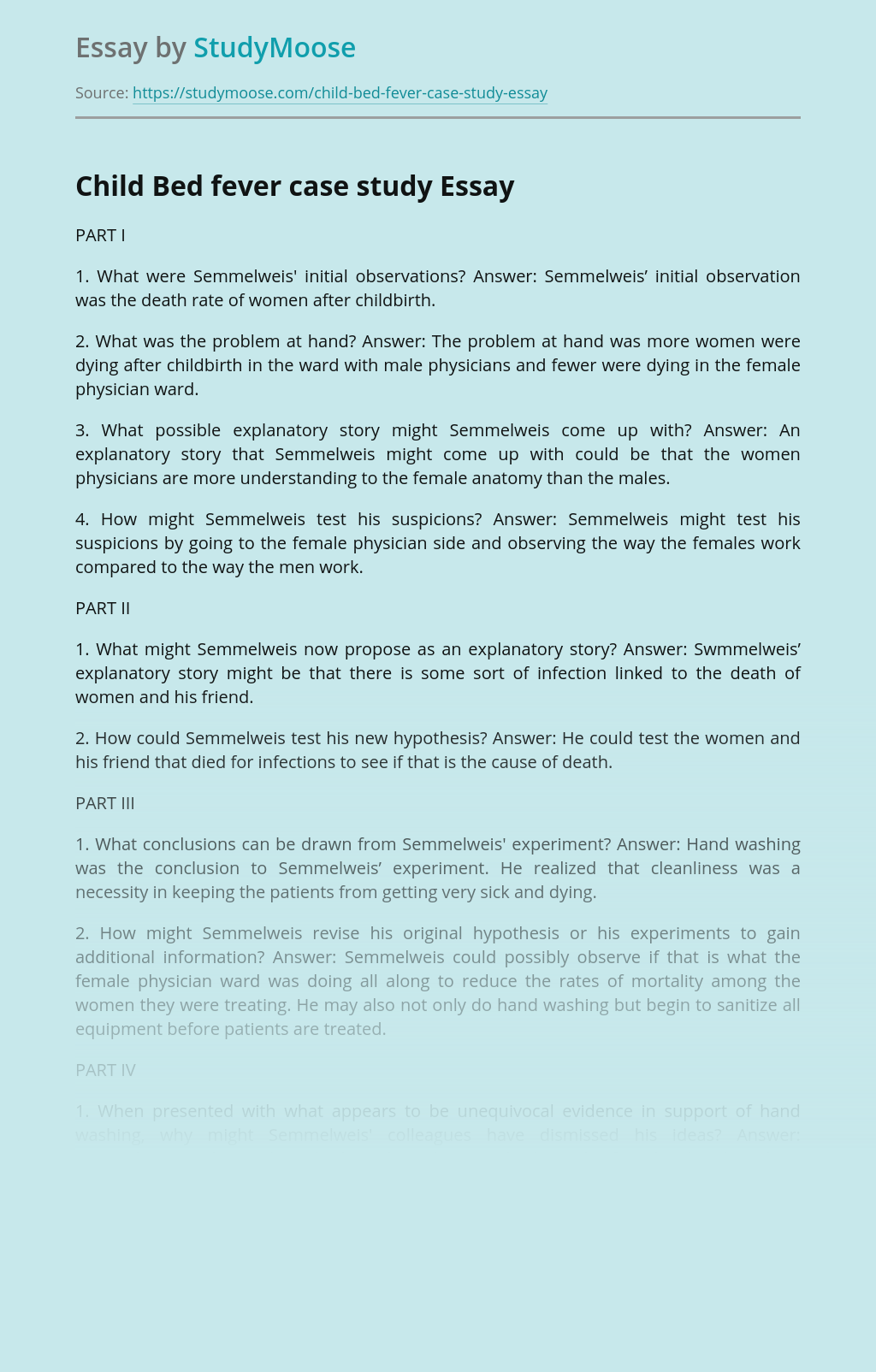 Educational environment- Settings that do not meet the statutory requirements required within the EYFS can affect a child’s development and potential. Within our setting we are available at all times to speak with parents about their child or any concerns they have. We hope parents will see our setting as a safe and secure place...

One Laptop Per Child

1. Why are Microsoft, Intel, and other leading for earnings business thinking about low-cost computers for the establishing world? In 2005, Nicholas Negroponte, the creator of MIT’s Media Labs, revealed the One Laptop computer per Child (OLPC) program at the World Economic Forum. The idea was simple and appealing. Innovate a $100 laptop and distribute...

Get Essay
Personal factors that can influence children’s development

Introduction Early childhood educators play an important role in observing, recognizing, and supporting children’s development (Charlesworth, 2014). In this report, child E has been chose to be observed with different observing methods including running record, anecdotal record and learning story. Child E is a 3 years old boy. His father is a New Zealander, and...

Kid abuse is a prevailing problem in society that must be addressed at the soonest possible time. Nevertheless, it is among the most hard issues to attend to as well since there are just particular ways by which it can be kept track of. What makes it even harder is the reality that the moms...