Chicken of the Sea Company

1. Discuss the consumer decision making process for a product such as canned/packaged tuna and the response hierarchy model this is most likely to be applicable in the purchase of this product. * Consumers of packaged tuna usually go through the low-involvement hierarchy.

Don't use plagiarized sources.
Get Your Custom Essay on Chicken of the Sea Company Just from $13,9/Page

Unless consumers have loyalty to a certain brand, they usually pick the product with the lowest price. Tuna is not something that will cause consumers to go though cognitive dissonance because of the low-involvement hierarchy.

2. Discuss the role integrated marketing communications plays in the marketing of canned/packaged tuna for a company such as Chicken of the Sea International. How might the company use the various IMC tools as part of its marketing program? * The role IMC plays in marketing canned/packaged tuna is to establish brand identity and equity. Chicken of the Sea has a target market of women usually 25-54 years old. The idea of promoting the product with the use of Jessica Simpson will help to promote the product to different target audiences, in order to create brand awareness.

3. Discuss how Chicken of the Sea’s marketing personnel and advertising agency might evaluate the appropriateness of using Jessica Simpson as a spokesperson for the company and whether she is a good fit for the brand. * Chicken of the Sea’s marketing personnel and advertising agency has a lot to evaluate when deciding whether Jessica Simpson is right for their brand. The company was worried if Simpson’s ditzy reputation was something that they wanted representing their products. Chicken of the Sea’s target market usually consists of 25 to 54 year old women and since Simpson is popular among teens, they were not sure how their target market would react to her.  They also had to evaluate how they were going to use Jessica Simpson when promoting the product. The company was nervous that advertising Simpson through television commercials was going to be too expensive and too risky.

4. Discuss the pros and cons of Chicken of the Sea International hiring Jessica Simpson as a spokesperson for the company. Can the company afford to hire her and spend the money on TV advertising to use her effectively? * Jessica Simpson could be an asset to Chicken of the Sea. Having her as a spokesperson could bring in new customers and establish brand awareness to people outside of their target market. If the company feels that having Simpson on television commercials to promote the product is expensive, they can utilize her singing talents and have a new Chicken of the Sea jingle. The jingle could be played on the radio and it will reach many different audiences. The downside to having Jessica Simpson as a spokesperson is that Simpson’s personality may not agree with the company’s target market that is usually very loyal to the brand. In addition, hiring Simpson as the spokesperson would cost at least one million dollars. If the marketing plan fails, this could result in a massive loss.

5. What would you do if you were Don George? Would you recommend that the company hire Simpson as a spokesperson? Why or why not? * The pros of hiring Jessica Simpson as a spokesperson can definitely outweigh the cons. Simpson generated a great deal of buzz from her television by not being able to differentiate between chicken and tuna. Many people heard about it even if they did not follow the show. Don George should capitalize on that buzz and hire Simpson. Not only could she be promoted through television commercials, but she could be used in radio advertisements and magazines. Although these advertisements are expensive, using Simpson should generate brand awareness that could give Chicken of the Sea advantage over its competitors and generate revenue.

Chicken of the Sea Company. (2016, Jun 12). Retrieved from https://studymoose.com/chicken-of-the-sea-company-essay 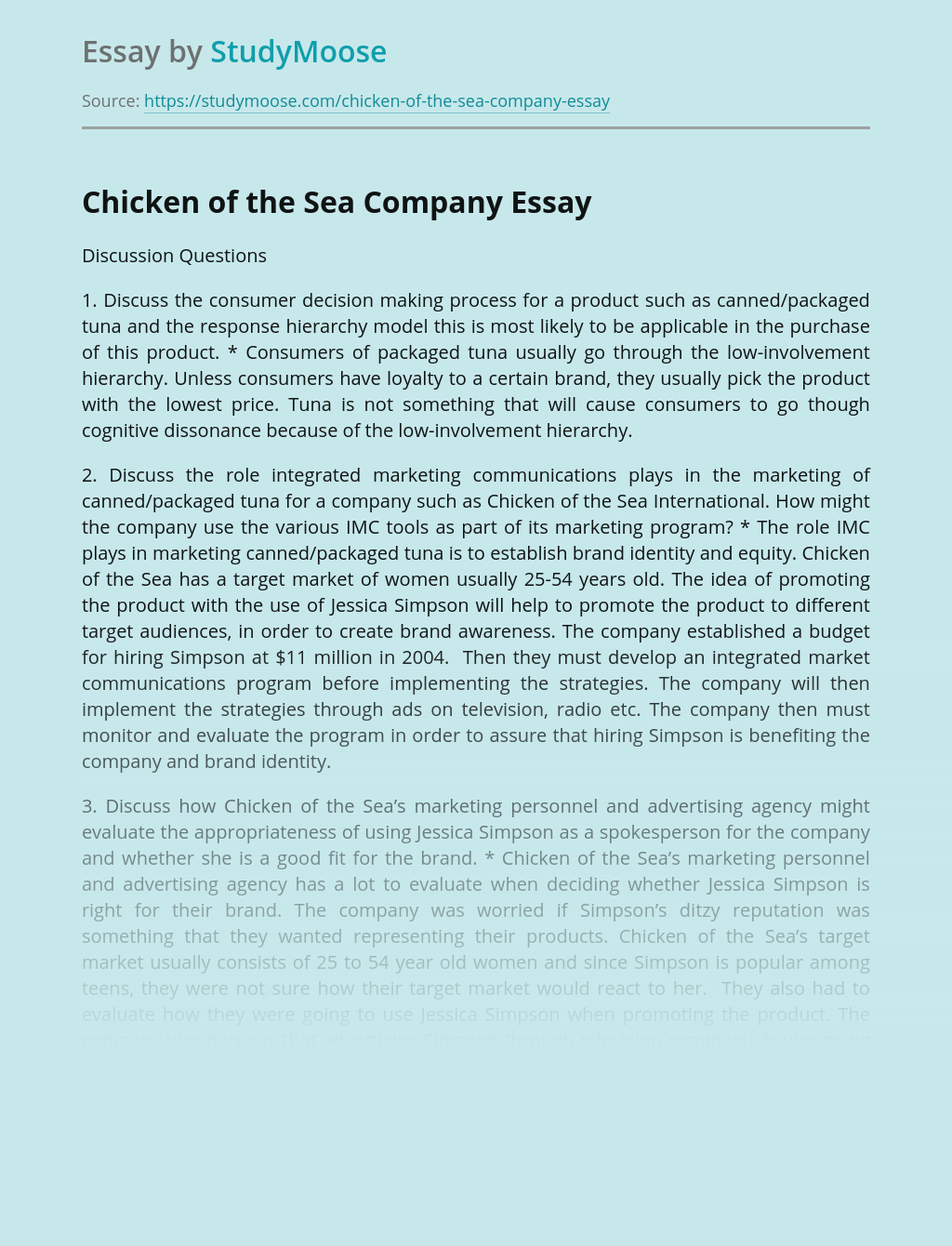 How Has Music Marketing Changed over the Years and Where Does the Future of the Music Press Lie?

Rate this post In this day and age, technology is developing so rapidly that changes are occurring all across the board. Faster internet, digital photography, and interactive programs are all making advertising and marketing much easier in the ever expanding world of consumerism. With all these new advances, there are bound to be numerous changes....

Rate this post “I think Canada was simply really prepared for it,” says Aviva Groll, group account director at Ogilvy, who has dealt with Dove considering that 2004. “There was a great deal of support internally at Unilever, it struck home … [It was] a time of great experimentation and fantastic leadership that enabled that...

Rate this post A well-known health and beauty company, Paramount is launching a high-technology nondisposable razor, Clean Edge. They are searching for the most efficient way to gain market share. Their concerns come down to three main problems: whether they should target niche market and price the product in the super-premium segment, or aim mainstream...

Rate this post Ideally, the key segments selected would have high product penetration and would contain the highest proportions of hea^y users, indicating greater volume potential, a healthy position for the brand or brands under consideration, and favorable brand attitudes. This t’pe of ideal situation would make the selection of target segments quite easy. Unfortunately,...