Chick-fil-A president Dan Cathy greeted employees at the newest Charleston area restaurant with a Bible verse, a prayer and a message about doing business the “Chick-fil-A Way. ” Most people recognize the famous Chick-fil-A cows and their misspelled pleas to “Eat Mor Chikin. ” But not everyone may be aware of Chick-fil-A’s unique way of doing business. With a focus on quality food, superior customer service and dedicated employees, Chick-fil-A has built a restaurant empire. Another freestanding restaurant opened Sept. 29 on Dorchester Road near the Ashley Phosphate Road intersection in North Charleston.

Don't use plagiarized sources. Get your custom essay on
“ Chick-fil-A Customer Service ”
Get custom paper
NEW! smart matching with writer

Two days before the opening, new employees—called “team members” in the Chick-fil-A world—served dinner to their family members and listened as Cathy explained the importance of smiling and treating customers with honor, dignity and respect. Chick-fil-A’s mission, he said, is “to glorify God by being a faithful steward of what is entrusted to us. ” Sandwich history Cathy is the son of Chick-fil-A founder S. Truett Cathy, who entered the restaurant business in 1946 when he opened Dwarf Grill in an Atlanta suburb.

It would be another 20 years before the world was introduced to Chick-fil-A.

Truett Cathy spent months perfecting the recipe and figuring out the best way to cook the chicken quickly.

After four years, he had a boneless chicken sandwich. According to Chick-fil-A history, Truett Cathy originally called it a chicken steak sandwich but began thinking of something that could carry a trademark. The best cut of a steak is the fillet, so why not call the sandwich a chicken fillet, he thought. The name morphed into chick fillet and eventually became Chick-fil-A (with a capital “A” to emphasize quality). The first Chick-fil-A opened in Atlanta’s Greenbrier Mall in 1967. The first freestanding restaurant opened in Atlanta about 20 years later.

The restaurant has continued its incredible growth, expanding heavily into the western United States, introducing a breakfast menu and healthier menu options. The Chick-fil-A Way Certainly Chick-fil-A isn’t the only quick service restaurant to make billions, but what sets Chick-fil-A apart is the company’s corporate philosophy, its emphasis on values, customer service and treating employees like family members. Dan Cathy attributes the company’s success to his 84-year-old father, whom he describes as a tremendous influence, a “patriarch” and “Moses figure” in the family and in the company.

Thanks to his father’s influence, Chick-fil-A has “stayed the course,” Dan Cathy said. Despite the many potential distractions, the company stays focused on its recipes, hot food, clean restrooms—the things that are important to customers. Interestingly, Dan Cathy refers to his company as being in the hospitality business—not usually the first description that comes to mind when thinking about fast food. But Cathy said the idea of being in the hospitality business began when his family opened its first diner. “That’s our heritage, our roots,” he said.

When the focus is on the customers and employees, success will follow, according to Chick-fil-A’s philosophy. “It’s all about the people,” Dan Cathy said. “You can’t have great tasting food until you have a good relationship with your employees. ” Chick-fil-A offers $1,000 college scholarships to its employees, having awarded about $20 million during the past 30 years. The company also has a unique agreement with its operators, providing franchisees with the chance to sublease a restaurant for $5,000. Each month operators pay the corporate office 15% of gross sales and 50% of net profits as a franchise fee.

Operators are assured a minimum annual income of $30,000. The company continues its long-standing tradition of being closed on Sundays, so employees can spend time with their families and attend a worship service. Despite opportunities to go public, Chick-fil-A remains a private company so it can retain control over its key values. Chick-fil-A has proven a business with values and principles can do well. And not just survive but thrive, Dan Cathy pointed out. In 2004, Chick-fil-A achieved sales of $1. 74 billion—an increase of 13. 8% over 2003.

The company is opening 61 new restaurants this year, and customer satisfaction scores are the highest they have ever been, Cathy said. The company will introduce milkshakes to its menu next summer. And a spicy chicken sandwich is being tested in the Tampa, Fla. , area. Family ties have local roots Operating the new Dorchester Road location is Daniel Dickerson, whose family has been operating Chick-fil-A for years. His father was one of the first Chick-fil-A operators, and his brother, Patrick Dickerson, is the operator of the Mount Pleasant Chick-fil-A.

Raised in Charleston, Daniel Dickerson previously ran a store in Ocala, Fla. Dickerson said he looks up to the Cathy family and also tries to live up to the legacy his own father left behind. Dickerson oversees 72 part- and full-time employees at his North Charleston store. Many of the employees are teenagers, and Dickerson—following a company tradition—employs students who are involved in their schools and extracurricular activities. Chick-fil-A promotes involvement and works around students’ schedules.

Dickerson said he would rather have 20 students with less availability than students who aren’t involved in their schools. At the family night celebration, Dan Cathy assured the parents of the many teenage employees their children would be working in a supportive environment. If grades aren’t maintained, students’ work schedules could be cut back. From providing scholarships to closing on Sundays, Chick-fil-A continues to do business its own way, based on principles Truett Cathy instilled in the company more than 50 years ago.

In 2002, Truett Cathy published Eat Mor Chikin: Inspire More People, a book that explains “Doing Business the Chick-fil-A Way. ” Truett Cathy opens a chapter on priorities and commitment by recalling when a reporter asked him how he would like to be remembered. Cathy responded, “I think I’d like to be remembered as one who kept my priorities in the right order. We live in a changing world, but we need to be reminded that the important things have not changed, and the important things will not change if we keep our priorities in proper order. ” Holly Fisher is the supplements editor for the Business Journal. 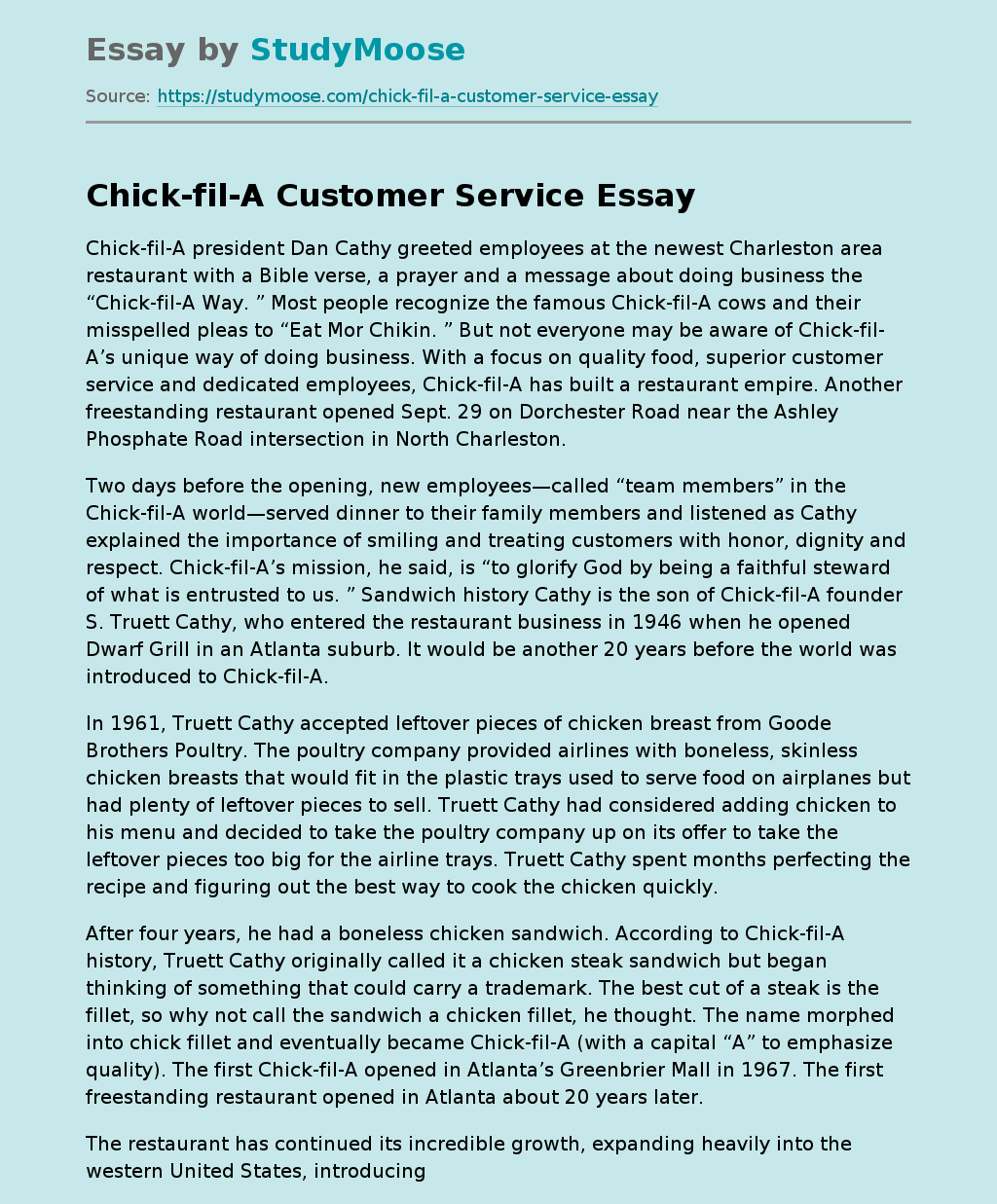