The energy of the subshell increases as follows:4s&lt;4p&lt;4d&lt;4f * “4s” has the greatest probability of being close to the nucleus * Subshells are limited to # of electrons they can hold ( 2 electrons per orbital) s=21s orbital d=105d orbital p=63p orbitals f=147f orbitals Assessment * How many p subshells are in the 4th energy level (n=4)? 34px 4py 4pz * What is the maximum number of electrons that can occupy the 4p subshell? each p subshell can hold 2 electrons and therefore there are 3p orbitals with 2 electrons *

What is the maximum number of electrons that can occupy the 4th energy 322n2=2(4)2 =2(16) =32 Creating Energy Level Diagrams * Used to show the relative energies of electrons in various orbitals under normal conditions * Each orbital is indicated by a separate circle/square * All orbitals of a given subshell have the same energy.

Don't use plagiarized sources. Get your custom essay on
“ Chemistry Energy Levels ”
Get custom paper
NEW! smart matching with writer

Ie. The 3p orbitals in the 3p sublevels have the same energy * The spacing between successive subshells decreases as the number of subshells increases overlapping of shells having different values of n.

Which electrons can be found furthest from the nucleus:2s or 2p. 2p is further. Fig. 3. 19

Arrow Orbital Notation Aka Orbital Diagrams * Use circles or squares for the orbitals and arrows for the electrons * RULES: * The Aufbau Principal- electrons will occupy lowest available energy level * Pauli Exclusion Principal- no two electrons have the same quantum numbers * Hund’s Rule – electrons remain unpaired for as long as possible. Ex: One electrons goes in each Px, Py, Pz, before they start to pair up Fig 3. 21 Electron Configuration –

Provides the same information as an energy level diagram but in a more concise format. * Li: 1s2 2s1 C:1s2 2s2 2p2 * Ne: 1s2 2s2 2p? Use the following concept map to help to determine the filling order of the orbitals: * The similarity among elements within groups and the structure of the periodic table can be explained by electron configuration * Li: 1s2 2s1 * Na: 1s2 2s2 2p? 3s1 Short Hand Notation -Use symbol of noble gas with the same core electron configuration: Ex. Na [1s2 2s2 2p? ]3s1 Or [Ne] 3s1 Some unexpected Electron Configuration *

Pb4+: [Xe] 4f14 5d10 (The 6p electrons are lost as well as the 6s electrons) Quantum Numbers * Electron waves (orbitals) can be characterized by a set quantum numbers, n, l, ml, ms Principle quantum number (n): * Identifies the energy of an electron in an orbital * All orbitals that have the same value of n are said to be in the same shell * Range from n=1 to n=infinity * Determines the size of the electron wave how far the wave extends from the nucleus * As n increases the energies of the orbitals also increase Secondary quantum number (l):

Divides the shells into smaller groups called subshells * n determines the values of l * for any given n, l may range from l=0 to l=n-1 * identifies the shape of the orbital Value of l| 0| 1| 2| 3| Letter designation| s(shape)| p(principle)| d(diffuse)| f(fundamental)| Magnetic quantum number (ml): * splits the subshells into individual orbits * identifies the orientation of the orbital * for any given value of l, ml has a value ranging from +l to –l * e. g. If l=0, ml=0; for l=1, ml=+1, 0, -1 which correspond to the x, y and z orientations of the p orbitals. 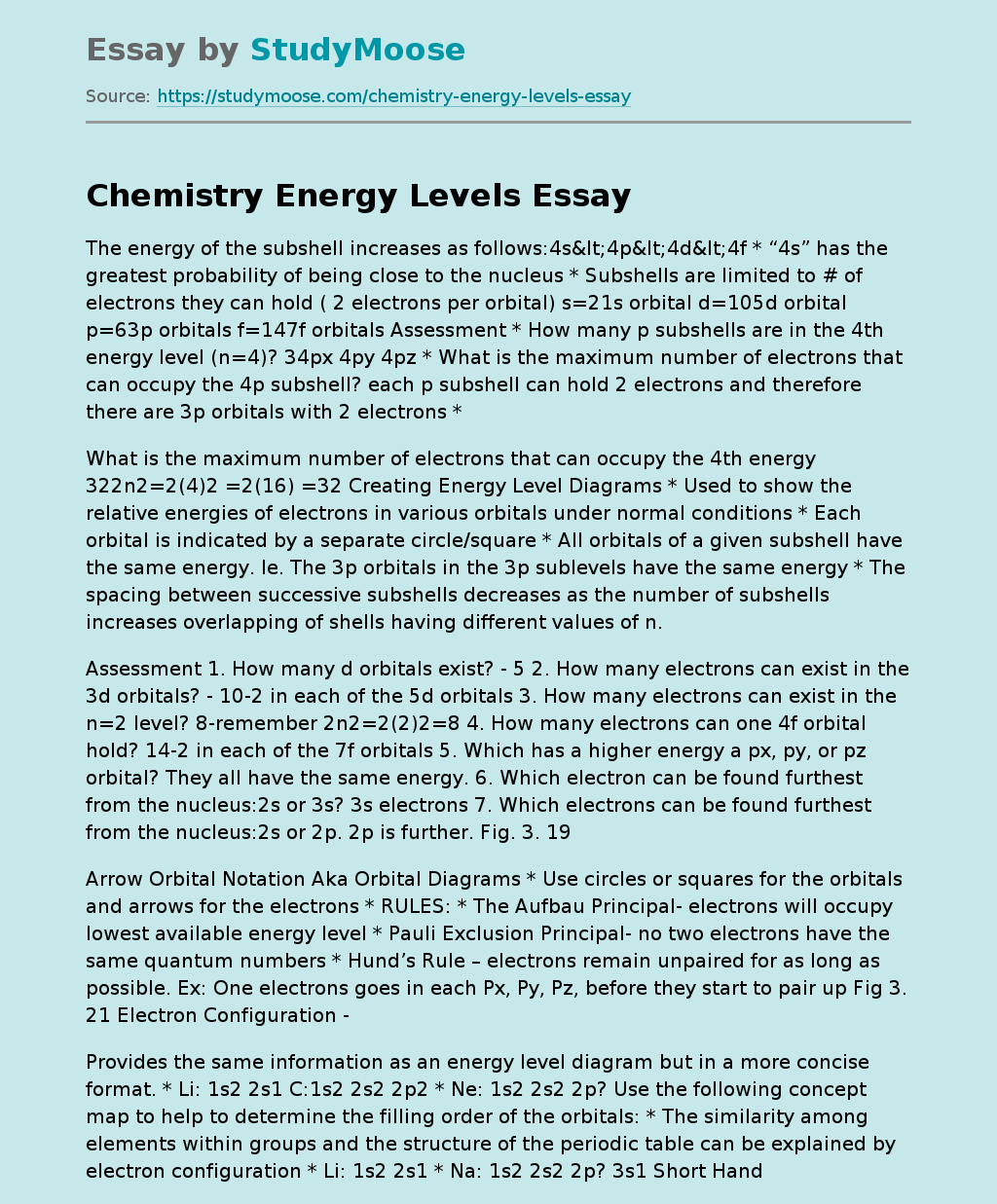