Chaucer’s Contribution to the Development of English Literary Tradition

Chaucer is commonly hailed as “the father of English poetry” who in such works as his masterpiece, The Canterbury Tales, significantly contributed to the development of English as a literary language. The “General Prologue” to The Canterbury Tales has often been praised as “the most perfect poem in the English language. ” The Canterbury Tales and his other notable works reflect Chaucer’s familiarity with French, English, Italian, and Latin literature, and demonstrate his consummate mastery of a variety of literary genres, styles, and techniques.

Don't use plagiarized sources. Get your custom essay on
“ Chaucer’s Contribution to the Development of English Literary Tradition ”
Get custom paper
NEW! smart matching with writer

His poems continue to draw the interest and praise of readers centuries after his death and are among the most acclaimed works of the English-speaking world. The originality of his language and style, the vivacity of his humor, and the depth of his understanding are continually cited as reasons for the permanence of his works. Chaucer’s decision to write in his country’s language, English, rather than in the was something of a risk, and a big break with learned tradition.

We learn, for example, that the cook has a pustule on his leg that very much resembles one of the desserts he cooks, or that the miller has a huge, pug nose.

For many of his portraits, Chaucer is relying on a medieval tradition of “estates satire,” a collection of stereotypes about people based on what occupation they had or what social class they belonged to.

Another medieval idea his portraits draw upon is “anticlericalism,” a tradition that got its start in reaction to a lot of abuses by clergy in the medieval church, but which basically became a collection of stereotypes about friars, monks, nuns, priests, and the like. Since The Canterbury Tales is a story about a storytelling competition, many of the questions it asks are about stories. As the pilgrims tell their stories, though, they turn out to be talking not just about fairytale people in far-off lands, but also about themselves and their society.

This leads to a lot of conflict in a group of pilgrims formed by members of that same society. It is sometimes argued that the greatest contribution that this work made to English literature was in popularising the literary use of the vernacular, English, rather than French or Latin. English had, however, been used as a literary language for centuries before Chaucer’s life, and several of Chaucer’s contemporaries also wrote major literary works in English. It is unclear to what extent Chaucer was responsible for starting a trend rather than simply being part of it.

Chaucer’s Contribution to the Development of English Literary Tradition. (2016, Jul 15). Retrieved from https://studymoose.com/chaucers-contribution-to-the-development-of-english-literary-tradition-essay 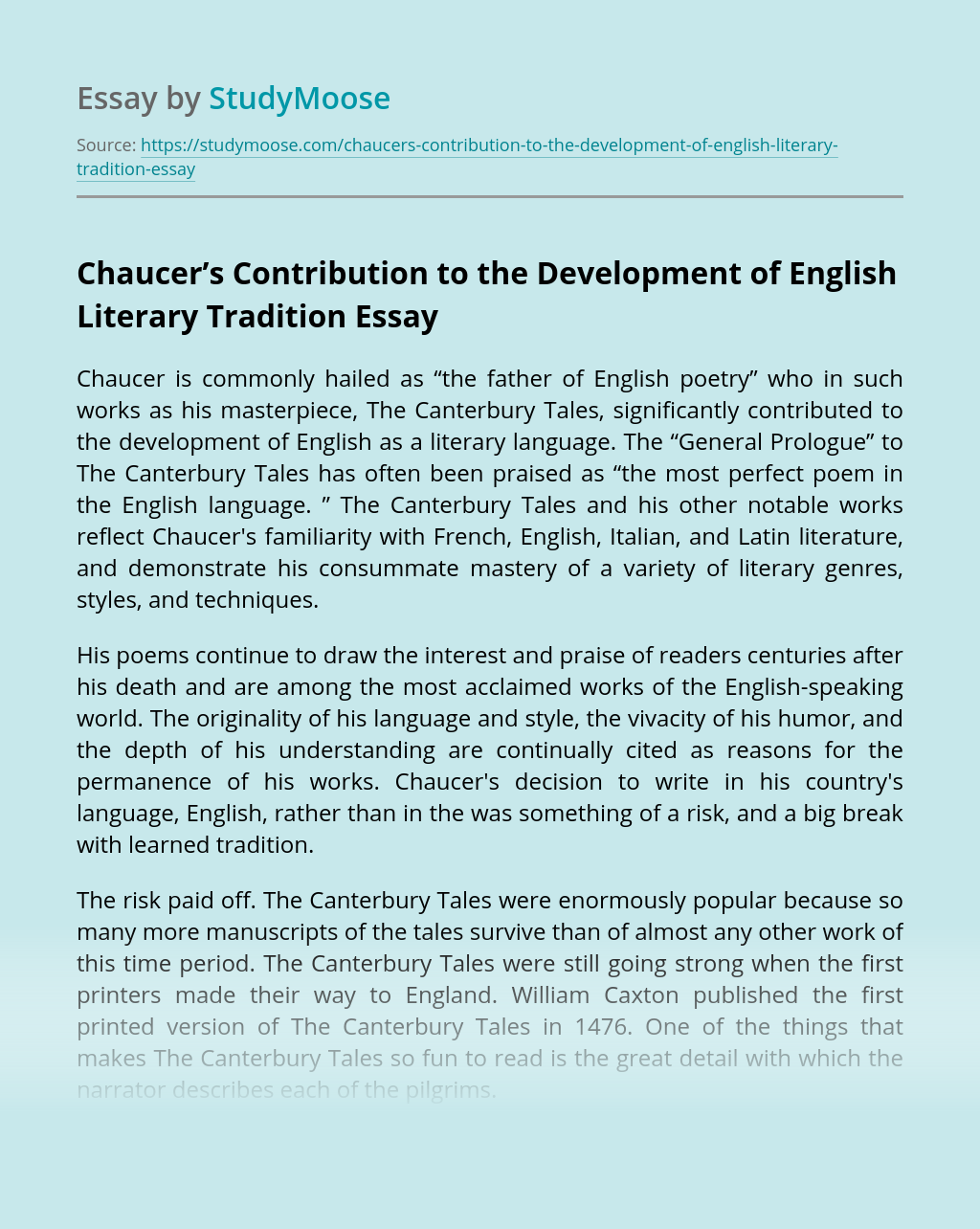