Gilman through her writings understood gender roles as socially constructed. She saw these socially constructed gender roles as damaging to women and men both, as they confined men and women to act out their lives in ways that were unfulfilling and limiting to each gender. The oppressive force of patriarchy is described in many different ways throughout her various short stories, but her stories are also imbued with strong messages of hope and transcendence.

Conditions for women are obviously much better in the 21st century, but patriarchy still oppresses women in the workforce, with women making 77 cents to men’s dollar (Adams 2013).

In “Three Thanksgivings, “The Cottagette”, and “Making a Change”, Perkins-Gilman is describing how limited women’s roles are in the economy. Especially during the time of her writings, women were delegated to the unpaid tasks of “women’s work. ” This included childcare, cooking, cleaning, and tailoring, among others.

Even work that women were paid for, such as music lessons, housekeeping, artwork, and sewing were not considered particularly valuable economic assets and were generally paid much less than other “male” professions.

In each of these stories the female characters are coerced either by the invisible force of patriarchy, or by the people around them, to assume a docile, domestic role as the “ideal woman”. Inherent to a woman’s role at the time of her work is women’s financial dependency upon men.

Men are portrayed as the superior sex, who must be relied upon by their wives/sisters/mothers for financial support, which paradoxically makes them quite burdened unnecessarily.

In “Three Thanksgivings”, Mrs. Morrison, a middle-aged widow, is told by her children and by Mr. Butts (who had paid the mortgage on her house) that she is incapable of taking care of herself and must be supported by either her son, a son-in-law, or Mr.

Butts. She ends up collaborating with her maid to turn her house into a parlor for the local women, charging a small membership fee for hundreds of ladies, and is able to pay off her mortgage and earn a living wage (Perkins-Gilman 1997: 17-30). In “The Cottagette”, Malda tries to suppress her natural talents to conform to society’s expectations of what a man would want from a woman (domesticity) to earn the love of Ford Mathews.

In this utopian story, Ford Mathews rejects Malda’s transformation to the domestic cooking, cleaning, “ideal” woman, for who she really is—creative, artistic, “rational” “high-minded” and “capable of friendship” (Perkins-Gilman 1997: 31-38). Finally, in “Making a Change” Julia and her mother-in-law decide to find happiness and self-agency by embracing their true passions, music and nannying, and they decide to embrace these passion as professions, which ends up helping the husband/son (Perkins-Gilman 1997: 49-56).

All of these stories generally end happily for both woman and man, as each woman becomes self-actualized and gains her agency as a person, so her husband or male counterpart realizes that it is meant to me, and actually benefits, himself. This is how Perkins-Gilman is able to express how she wishes society to change, and much of her stories possess semi-autobiographical instances, especially her most famous work, “The Yellow Wallpaper. ” In her other works, Perkins-Gilman clearly believes that economic self-sufficiency for women is crucial in order for women to be fulfilled.

Her most direct expression of this belief is demonstrated throughout “If I Were a Man. ” As she describes Mollie Mathewson’s transformation into her husband Gerald, and the feeling of possessing her own earned money in her pocket: “…All at once, with a deep rushing sense of power and pride, she felt what she had never felt before in all her life—the possession of money, of her own earned money—hers to give or to withhold, not to beg for, tease for, wheedle for—hers” (Perkins-Gilman 1997: 58).

Currently, in the United States women and men are both equally expected to be economically self-sufficient, except within particular patriarchal religious sects or other atypical instances. There is some dispute as to the specific reasons why this is so, besides just plain sexist discrimination.

Some explanations for the wage disparity are that women typically over-represent lower-paying jobs, such as social work, teaching, nursing, and childcare, women are less likely to ask for pay raises and promotions than their male counterparts, and women are more likely to take time off or have tighter schedules because they have to take care of children and the household. The last instance stated is known as “the second shift”.

Although women are now expected to work just as many hours as men, many women, not nly single mothers, are also primarily responsible for the domestic duties around the home, which, in essence, is like doing a second unpaid shift (Adams 2013). So, in addition to specific jobs considered “women’s work” being underpaid relative to other professions, women are still disproportionately responsible for all or most of the domestic and childcare duties. In “Making a Change” Julia opts not to take on the second shift of childcare, because her mother-in-law is much better suited and is so good at it that dozens of other women pay her to care for their children.

Perkins clearly believes that childcare should be a paid and respected career option for women. So, we are faced with the question: do women really have the same sense of agency and respect as men if they are paid less for the same work, and work that is primarily done by women is devalued? Although women are expected to work and have the “privilege” of earning their own wages, some of the gender role expectations that Perkins-Gilman describes could apply to pretty, whimsical, charming, devoted to pretty clothes, a loving wife, devoted mother, and possesses the love of society (Perkins Gilman 57).

Most of these characteristics don’t sound particularly outdated, especially “loving wife”, “devoted mother”, “pretty”, and “charming”. I can imagine Charlotte Perkins-Gilman writing a fictional story from the perspective of one of today’s beauty pageant contestants or commenting on the mundane life of a modern soccer mom. Thankfully, women today are able to write autobiographies, news stories, and exposes about issues like these in today’s world. Even though gender roles are still very much a part of modern society, it is gradually getting better.

In order for major institutional policy changes to me made, more women need to be positions of political leadership. As more and more women become educated and empowered, I’m sure the wage gap will continue to decrease, and perhaps our society’s values will be shifted in a direction that pays traditional “women’s work” jobs more, so that it really is a level playing field. 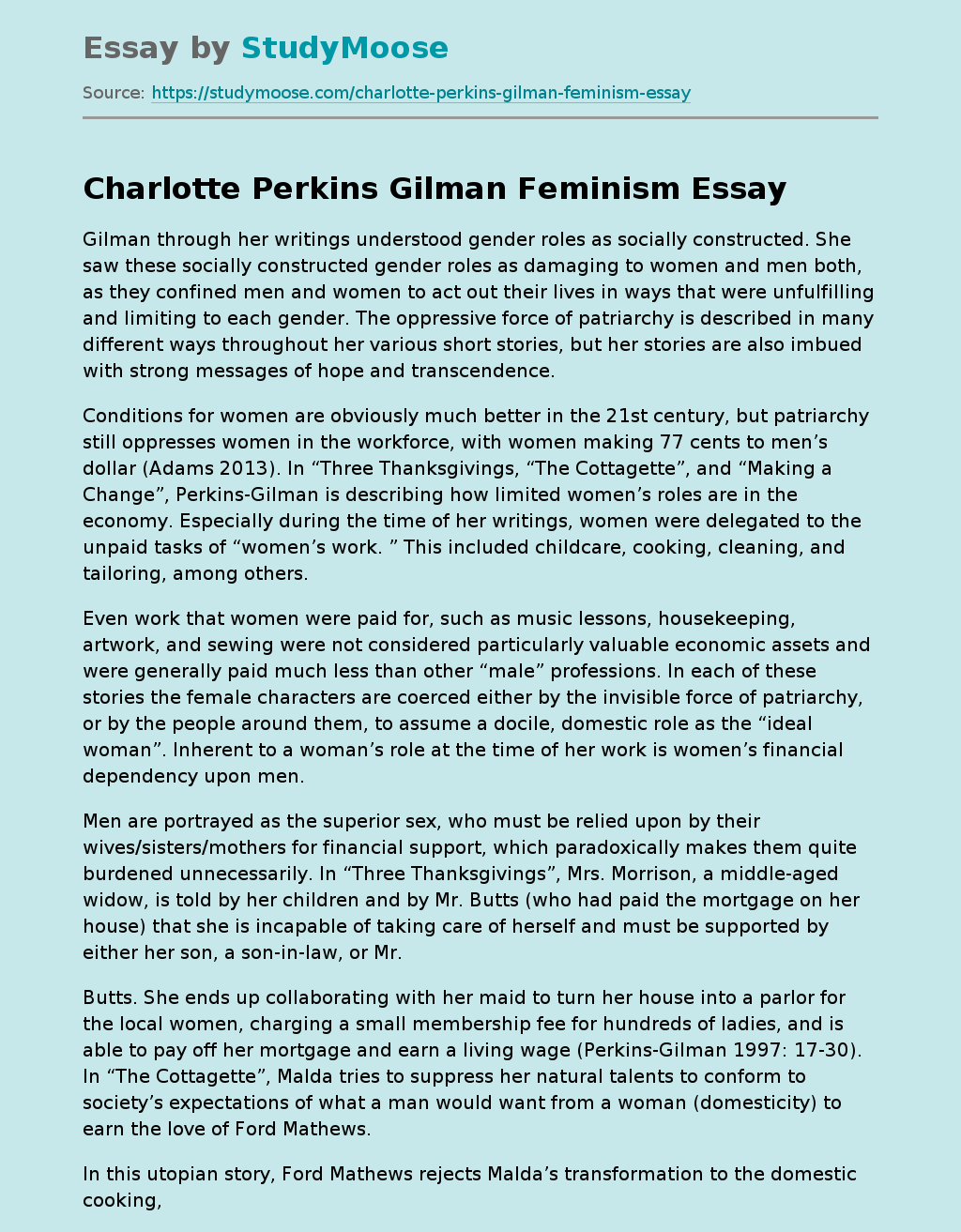