How does Charlotte Bronte convey Jane Eyre's state of mind in chapter two of the text 'Jane Eyre'?

Jane Eyre’s state of mind is conveyed throughout chapter two in Brontï¿½’s 1847 novel, Jane Eyre. Her vivid description of her fractured sense of self is portrayed during her emotional time in the ‘red room’. The story explores a diverse child by involving numerous techniques and situations that enables the reader, to understand Jane’s situation and her feelings towards people and the places around her. Bronte uses fist person persona she also uses a narrative voice, this allows the audience to gain an insight into the mind of Jane.

Don't use plagiarized sources. Get your custom essay on
“ How does Charlotte Bronte convey Jane Eyre’s state of mind in chapter two of the text ‘Jane Eyre’? ”
Get custom paper
NEW! smart matching with writer

The experience that Jane explores reveals a cultural context within the role and society of women of the time.

Furthermore Jane Eyre is put into the role of a 10-year-old orphan that lives with her aunt. Jane is very strict in the way she presents herself and her well-chosen words. She seems to be an intellectual adult fixed into a 10 year olds body. Her ability of understanding provokes Jane’s loneliness causes her to become isolated and inferior to other members of the household.

Jane’s hierarchy in the house is very abused and used against her, which also states her well being in the house. As she is young, inferior, and a girl this allows Bronte to go into depth on women and how others portray them. Due to her abusive aunt and cousins, resulting in anger and refuses to be demoted, which results in Jane being severely punished by being sent to the ‘red room’. ” Take her away to the red room and lock her in there “.

Her independence and strength of character is shown in well-defined opinions. Jane verbally and physically lashes out at her cousin John as a sign of strong nature to be treated equally. However Brontï¿½ shrewdly describes Jane’s kaleidoscope of emotions in the ‘red room’ via descriptive language, imagery and tone.

Jane has an array of emotions during her time in the ‘red room’, which fulfills many turning points on her emotional roller coaster. Her moods throughout the chapter are reflected in the deep colours of the room. At once Jane feels unease and sends her wildly along her interpretations of the gothic, darkened room. Firstly, she interprets a sense of rebellion, as she has been forced into the room, without choice. Therefore she immediately rebels by saying; ‘I resisted all the way’. This indicates Jane is full of passionate anger and emboldened by her outburst at John to fight on; as Jane is in the room that Jane’s uncle died. Her will and strength is clearly seen and looked upon for her desire upon her uncle. However, Jane then changes her point of view as she starts to accept where she is and what she has done or has to do. ‘I will not stir’ she accepts she’s unwanted and unloved. As it starts to get dark outside while in the red room she becomes more aware and afraid of her surroundings. The objects start to become incredibly frightening as she begins to feel inferior to the room and the room seems to widen. It is as if she is fighting a battle against the room and has to uncover her emotions so she can be free of them.

But again her mood alters during her time in the red room. Jane begins to feel intimidated and unleashes her terror, with her use of language. As well as Jane being terrified about the prospect about being locked in the room, with gloomy associations, she is extremely distressed and livid on the unjust treatment she receives from her family who despise her. ‘Unjust-unjust’, this quote is repetition but it creates a sense of control being lost. As the case of the quote switches to lower as if Jane’s losing her willing state of mind and beginning to allow her intimidation to take over. Her independence and strength of character is shown in well-defined opinions as a sign of strong nature to be treated equally, however this quote shows how she is losing her enthusiastic state of mind. This is as if Jane perceives her state of mind and then slowly calming herself and her mix of emotions by saying it quieter; and almost questioning her self when she repeats ‘Unjust’ the second time. The reader can tell that she doubts herself, which becomes ironic, as she is very defiant in her words and what she believes.

Eventually Jane completely loses herself and her whereabouts and her reactions to the room become hysterical. She begins to panic and starts to hallucinate, losing her state of mind. Whereas Charlotte Bronte cleverly defines the use of subordinate clauses and complex sentences to build up the tense atmosphere however it creates a tiresome effect. As well as it being tiring the long complex sentences dramatize the situation making it seem ending less and putting the reader out of breath. ‘The bed rose before me’ this quote used to portray the images that she perceives, showing that she is hallucinating and beginning to see things. The experience overwhelms Jane therefore she attracts the nightmare like images in her mind. Not only can Jane realize that she is in such a terrible state but the simile described by her best friend Bessie also indicates others are noticing her irrational circumstances, even outside the room. ‘she’s like a mad cat’ this personified sentence judges and declares Jane’s somber character. Also, the way Jane has been described creates an image of an insane, out of control and vicious fashioned cat, with the common outlook that the cat is rabid. This concludes how Jane’s personality changes to dangerous and is acting throughout her temper and outrage created by Brontï¿½.

Much language techniques are used in Chapter two of the text Jane Eyre. Charlotte skillfully slots the literary techniques in by using common techniques to oversee the sentence. Brontï¿½ also uses hyperbole, ‘a moments mutiny’. Also ‘No jail was ever more secure’. In both quotes shown, Charlotte is exaggerating her as in the second quote shown; Jane is not really in a jail but from her point of view it is, therefore she seemingly comes across as a very dramatic character. As Jane comes across as extremely over dramatic, it begins to become annoying and boring. Therefore her well-portrayed image of intellectual starts to reverse as Jane starts to become her age, with all her moaning and whining. ‘like the Roman emperors’; this simile again shows Jane’s well-exaggerated sense of self. However it shows what powerful, corrupt and murder.

This sends Jane’s imagination senseless becoming overactive. As well as similes and repetition used Brontï¿½ includes many metaphors. Bronte uses a metaphor as well as juxtaposition ‘rebel slave’ this shows that Jane is a rebel when she isn’t treated fairly. But also a slave when needed. ‘I was at discord’ again shows her overstated side, but also shows her self-pity reflecting and showing her state of mind. Jane also begins to question herself near the end of her time in the red room. ‘Why was I always suffering, always browbeaten, always accused for condemned?’ this shows that Jane feels sorry for herself. Her self-pity causes her to reflect back on herself on her severe emotions, questioning her authority, her being abused and herself.

Imagery is one of the main terms consistently conveyed in the readings of Jane Eyre. As it is used throughout very cleverly and takes a part in how Jane’s state of mind is conveyed. Charlotte Brontï¿½ provokes the imagery by using much descriptive language conveying Jane’s state of mind and her surroundings. The well depicted room connotation the word red is thoroughly used to make the audience revise Jane’s reflections of emotions. Conversely as her emotions are distinguished in many ways: murder, love, hate, passion, anger it could well be recognized that the colour of the red room represents Jane’s womanhood. The room could represent her womb as she as young woman starting the cycle of her period. Periods also add the effect of a given desire of mood swings which could also have helped push Jane’s array of emotions to their absolute limits. However when she comes out of the room she could have gained the self-recognition she needed to reflect on and gain use of her wild like experiences through the up and down tragedies of the red room.

In addition the glass mirrors show her inferiority by showing her fractured sense of self and reflecting everything that she has become. However, ironically, it is also helping her like a friend as she feels trapped and forgotten. The mirror helps her to look inside herself to give self-recognition. As she is attention starved the thought of another human being in the room may uplift her: and in this case it would be her reflection. The irony of paradox is shown as Jane is locked in a huge room with a hot fiery colour but still manages to feel cold. Even though the colour should be enough to warm her not even her mental emotions warm her up the slightest. Even though she is experiencing anger, which leads to being hot and anguished, ironically she still manages to feel cold. By the use of the self-recognition, and the ideology added by Brontï¿½ gives a great effect to the room, and cleverly conveys Jane.

Overall, I think that Jane’s state of mind is extremely well portrayed by the use of Brontï¿½’s language and her descriptive image of Jane. Charlotte’s background was extremely similar as she was also locked in a room. Consequently I find that she has switched her role into the character and reproduced all her emotions into Jane. As the emotions are so effective it begins to feel life like and the reader manages to apply the emotions to themselves because of Charlotte’s style of writing.

How does Charlotte Bronte convey Jane Eyre's state of mind in chapter two of the text 'Jane Eyre'?. (2020, Jun 01). Retrieved from https://studymoose.com/charlotte-bronte-convey-jane-eyres-state-mind-chapter-two-text-jane-eyre-new-essay 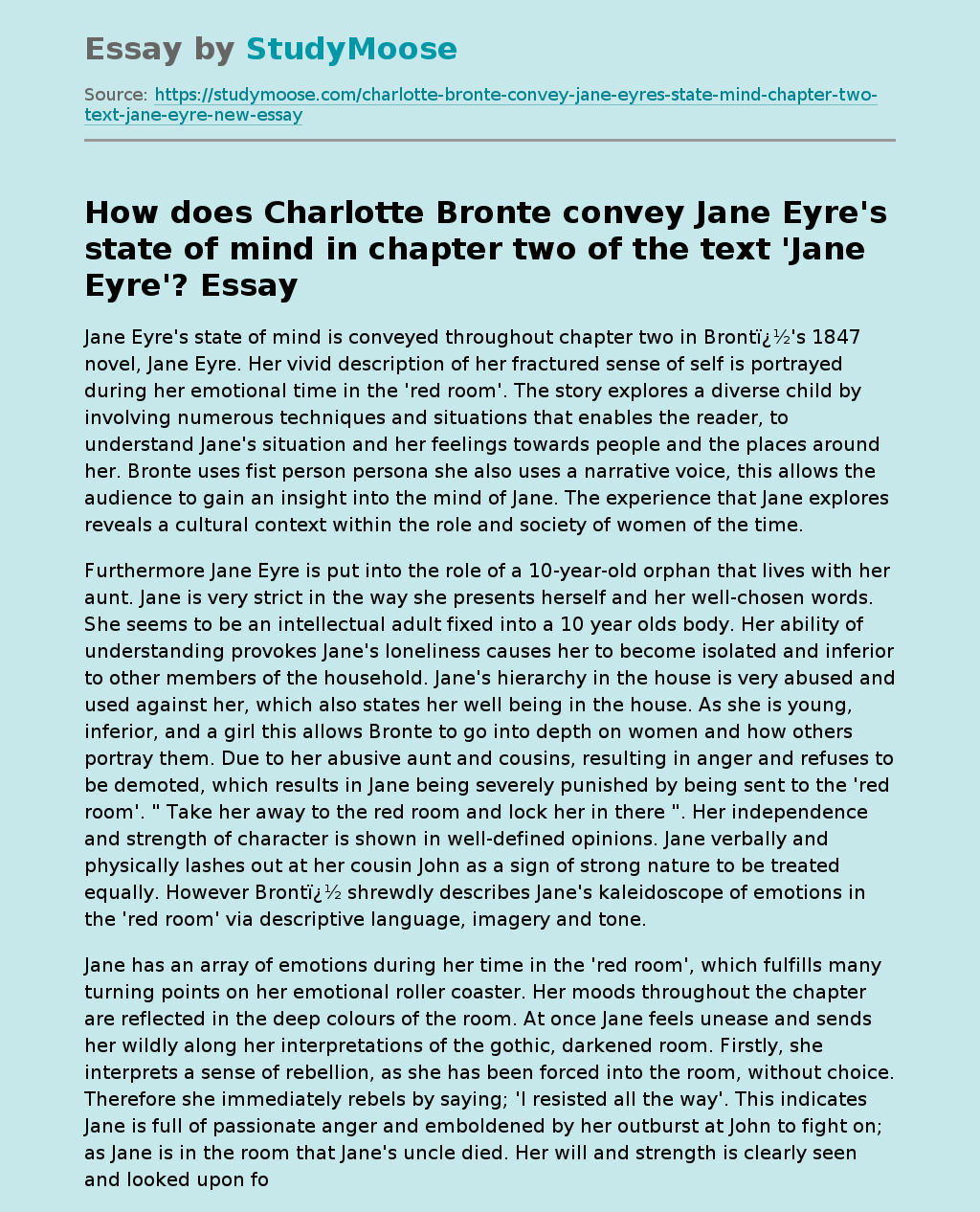