Charge of the light brigade

Compare how conflict is presented in the charge of the light brigade and one other poem form the conflict cluster. The two poems “Charge of the light brigade” and “Bayonet charge” both present conflicts. Conflict often has harmful effects, including causing death and destruction, so it is usually viewed negatively. However, conflict can also bring out positive traits in people, and the people involved in it may be respected. “The Charge of The Light Brigade” recounts the story of the charge made by the Light Brigade in the Battle of Balaclava.

Don't use plagiarized sources. Get your custom essay on
“ Charge of the light brigade ”
Get custom paper
NEW! smart matching with writer

“Bayonet Charge” imagines a soldier’s experience in battle. Tennyson reflects on conflict within the poem when discussing the subject of war, where someone had “Blunder’d” impending doom upon many soldiers. The original charge of the light brigade took place in the Crimean War. The poem describes a disastrous battle between the British and cavalry and Russian force. Instead of retaking guns, the commanding officer imperatively commanded “Forward, the Light Brigade! Charge for the guns” this command sent the cavalry, only armed with swords, and into battle with the Cossack’s, armed with guns, practically defenceless against their enemies.

The soldiers very obedient, and with their sense of duty- Don’t question their command officer. “Bayonet charge” describes the pain and fears single solider experiences during battle. The solider is a helpless victim, “running”, “stumbling” and “sweating”. Fighting has also destroyed the patriotic feeling that the solider had to begin with – “king, honour, human dignity, etcetera/ Dropped like luxuries.

One way conflicted is presented in “Bayonet Charge” is through the use of language. The language used, portrays the soldier and his actions/movements. Ted Hughes uses sibilance to portray the soldier’s actions as well as feelings. For example, “raw-seamed hot khaki, his sweat heavy/ Stumbling…” The use of sibilance here mimics the squelching mud. The repetitive sounds recreate an image of the soldier walking through mud. The word ‘khaki’ suggests that the person being described is a soldier as it is normally associated with the military uniforms.

The word ‘heavy’ suggests that the soldier is uncomfortable and his movements are unnatural. The word ‘stumbling’ suggests that the soldier is disoriented and could also suggest that his movements are clumsy. The language used in the poem is contrasting to what you would expect of a poem about conflict, words such as “dazzled” are used, which do not reflect the general thought of war. Alternatively words like “sweating” and “running” help to create a sense of urgency within the poem. The contrasting words together could be showing the mixed emotions felt by the soldier. Another way language is used to present conflict is through the use of similes. For example, “Sweating like molten iron from the centre of his chest”. The phrase ‘molten iron’ suggests a burning, abject terror at the heart of his being. On the other hand, “The Charge of the Light Brigade” uses metaphors such as “Valley of Death” to present conflict. This phrase forebodes the charge as it makes it sound certain that the soldiers are going to die. It also suggests the commander has made a mistake as he has sent them into the ‘valley of death’.

This makes the soldiers more courageous as they are marching into their own deaths. It also creates the allusion to psalm, where faith instils courage in the face of death. The form of “bayonet charge” is regular; the stanzas are eight, seven and eight lines long: this suggests the soldier’s strong sense of purpose as well as the thick mud he has to run through. The length of the lines, however changes: there are long lines ending in his destination (lines 3 and 19) showing the long distance he has to run; there are also short lines presenting images of violence and fear (lines 4 and 18). Tennyson uses the form of the poem to illustrate both the battlefield he describes (the long, narrow valley) and the memorials he wants built to honour those who took part (six stanzas like memorial stones to the 600).

The stanzas get longer and the rhymes more frequent after the calm opening stanza. This poem is nightmarish in the illusion it creates of horror in describing a bayonet charge. It is about a soldier’s experience of a violent battle. It describes his thoughts and actions as he desperately tries to avoid being shot. The soldier’s overriding emotion and motivation is fear, which has replaced the more patriotic ideals that he held before the violence began. The poem ends with ‘His terror’s touchy dynamite.’ Dynamite is clearly linked to the violence of war; being touchy implies the volatility of his emotions under these circumstances, as though he has emotionally become the violence of war. In the face of the ‘yelling alarm’ of battle, all sense of ‘honour’ and ‘dignity’ are blown away by ‘His terror’s touchy dynamite’ and the poem ends leaving the reader with a chaotic collage of images of nightmarish violence and horror.

Charge of the light brigade. (2016, Aug 31). Retrieved from https://studymoose.com/charge-of-the-light-brigade-essay 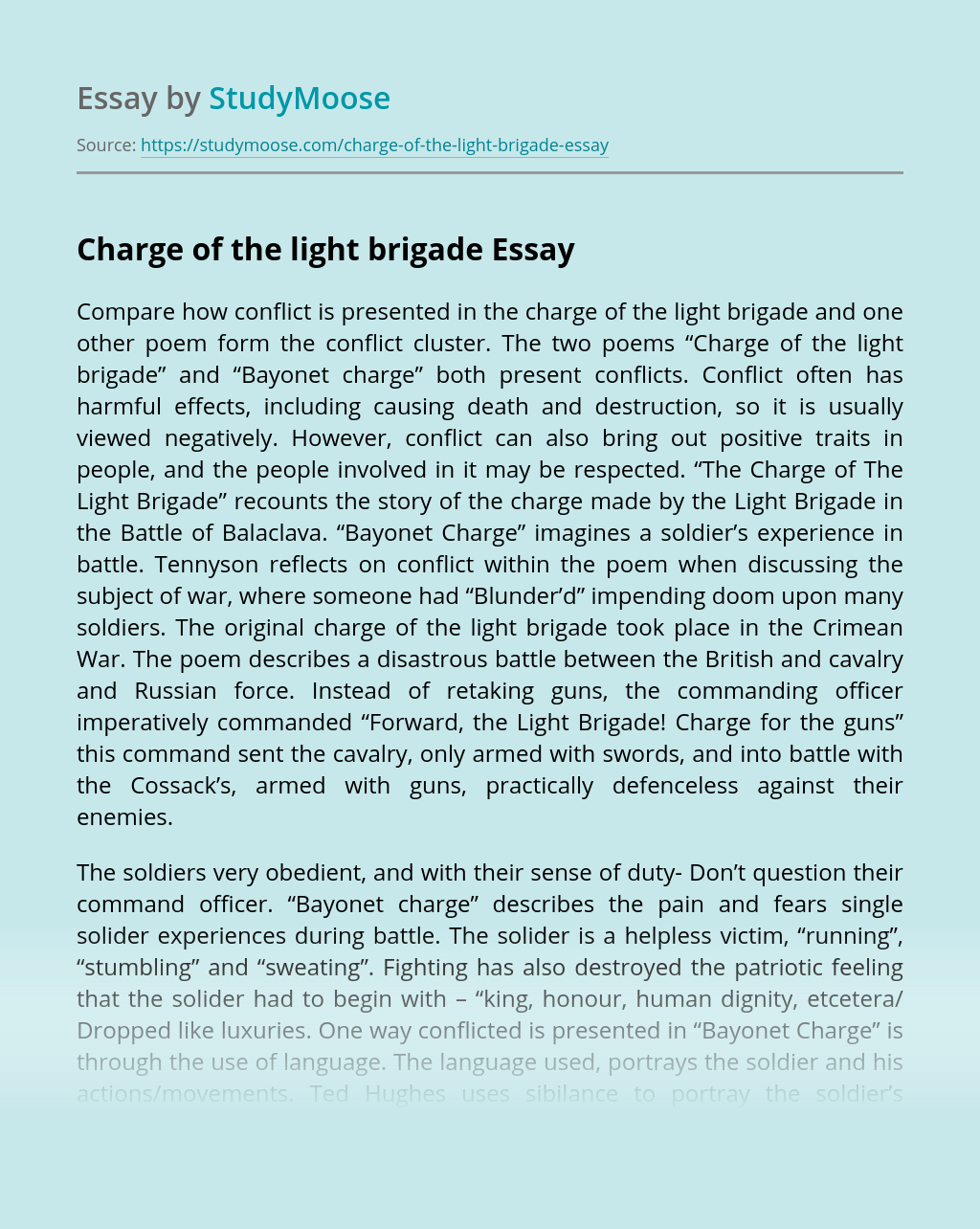