Charge of the Light Brigade Analysis

Don't use plagiarized sources. Get your custom essay on
“ Charge of the Light Brigade Analysis ”
Get custom paper
NEW! smart matching with writer

I would argue that this, along with other literary techniques, shows that Tennyson was successful in glorifying the Charge of the Light Brigade in his poem. As I mentioned before, the rhyming scheme is an integral part of the poem.

The rhyming varies for each stanza, which at first seems like a large fault of the poem. The length of each stanza lengthens as the poem goes on, perhaps trying to simulate how the battle escalated. This pattern continues on until the last stanza where the number of lines is significantly reduced. This indicates the resolution of the poem. For the first verse, Tennyson utilizes an ABA pattern for the first half.

This repetition of certain phrases creates a rhythm not unlike the galloping of horse’s hooves on the ground. This creates a feeling of verisimilitude and provides an authentic experience for the reader. The repeated phrase, “Cannon to the right of them/Cannon to the left of them/Cannon in front of them. ” suggests that they were surrounded by enemies on all sides. The sentence also suggests the large imbalance of numbers on the British side compared to the Russians.

This emphasises the victory at the end of the poem.

While Tennyson tried hard to glorify the Charge of the Light Brigade, he also attempted to express the large amount of casualties as well. Tennyson utilized metaphor and allusion to acknowledge the amount of death on the field without being overly graphic in his description. He used the phrase, “Into the jaws of Death/Into the mouth of Hell” repeatedly to further his point. In my opinion, Tennyson accurately portrayed and glorified the Charge of the Light Brigade in his poem, using a variety of literary techniques.

Charge of the Light Brigade Analysis. (2018, Oct 13). Retrieved from https://studymoose.com/charge-of-the-light-brigade-analysis-essay 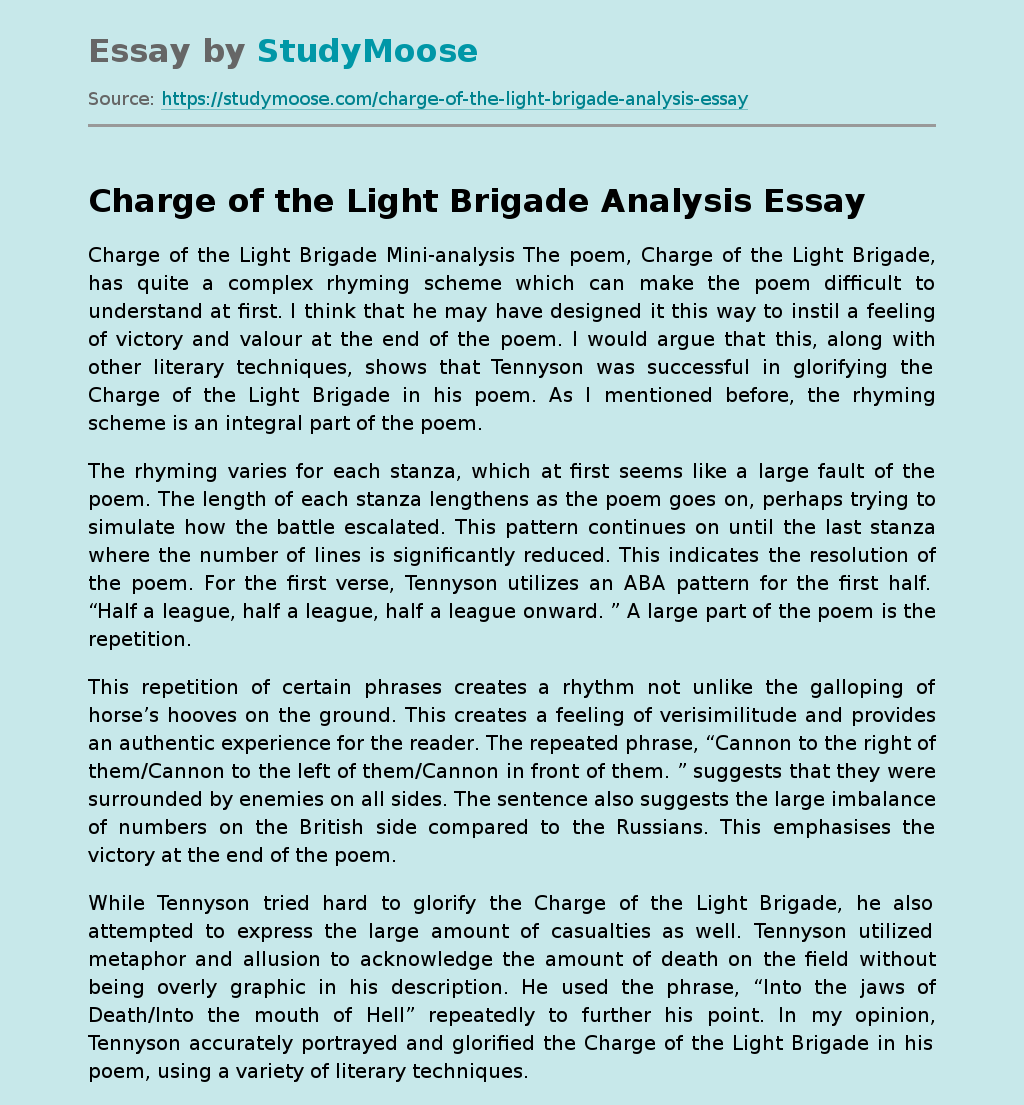