Rudyard Kipling’s “The Man Who Would Be King” is about two ambitious ex soldiers stationed in India who set out to become the rulers of an entire country. After finishing their tour in India, Daniel Dravot and Peachy Carnehan decide that India is “too small for the likes of them,” so they set out to be kings in a city called Kafristan. Compared to John Huston’s film The Man Who Would Be King, the characters Billy Fish, Carnehan, and Dravot have many differences from Kipling’s short story.

Don't use plagiarized sources. Get your custom essay on
“ Characters in Rudyard Kipling’s The Man Who Would Be King and John Huston’s Version ”
Get custom paper
NEW! smart matching with writer

Huston’s changes make the film more light and humorous than Kipling’s story. Peachey Carnehan is one of the main characters in both works, and the two characters have many similarities yet differences. Carnehan, in Kiplings story, is an explorer who risks his life to become one of the rulers of Kafiristan. Dedicated to their plan, Carnehan is far more cautious than Dravot and is determined to remain true to their contract, which forbids consuming liquor or becoming involved with women.

Proficient in: Comparing a book to a movie

Huston’s Carnehan is quite different than Kipling’s. He takes a lot more risks and is not as cautious, as we see when he convinces Dravot to be not just a king but a god, which is way too risky to attempt without major consequences.

Seemingly, Kipling’s character is more interested in the business of governing and the mystical nature of kingship than in personal gain. Whereas, Huston’s character seems to care more about his personal gain and the dream of how he will one day be a wealthy man.

Additionally, he helps Dravot keep up the persona of being a god for the sole purpose of being wealthy one day. The most similar way they are alike is at the end, when against all odds, both Carnehans make their way back to the narrator so that they can tell their story to a sympathetic listener before they die. Crippled by the people whom they desired to rule and whom they deceived, both Carnehans never surrender their spirit or cease to scheme. Only death puts an end to both careers. Thus, while there are differences between the Carnehans, there are also similarities.

There are also similarities and differences between the other main characters, Daniel Dravot. In the short story, Dravot is a dreamer, the companion of Carnehan, and the brain behind their attempt to seize the tiny kingdom of Kafiristan. The first two statements are true about Dravot in the film as well. But, in the film, Carnehan is the mastermind behind the attempt to take over the kingdom, not Dravot. Another thing different between the two Dravots is their physical descriptions. Kipling describes Dravot as a physically intimidating, red-bearded giant that ignores all warnings in his effort to follow his dream of power and wealth. Huston also choses a similar personality for his character, but instead of a red beard, it is grey. Additionally, Kipling’s Dravot uses modern weapons, and he imposes his will on the superstitious people of Kafiristan. Although he brings them peace and a modest prosperity, he does not hesitate to exploit them. Huston’s Dravot also uses modern weapons. He also brings peace but does not falter to exploit the people in any way. Both Dravots are rich beyond their expectation for a short time, and both are also awarded with an almost god like power.

Moreover, Kipling’s and Huston’s characters decide to break the contract with Carnehan by taking a wife. This is when the people turn on both Dravots, as they both prove themselves to be a lustful human being and not a deity. Attempting to escape his unruly kingdom, Kipling’s Dravot is captured, but he is allowed to die like a monarch: proud and bold. Huston’s Dravot also tries to escape, but the people he deceived catch him and execute him. Regardless, he was also too proud and bold until the end. Both characters are similar but different in several ways. Kipling’s Billy Fish is almost completely different from Huston’s Billy Fish. He is in the film more than he is in the short story. This is because he is Dravot’s and Carnehan’s translator for the Kafiristan people. But in the short story, Dravot learned the Kafiristan language, so there was not much need for Kipling’s Billy Fish. Another difference between the two characters is how he received his name. In the short story, they called him Billy Fish because he reminded them of someone they used to know.

However, in the film, he introduces himself as Billy Fish. The two characters are similar in that they both do not flee from their enemies and end up being brutally murdered trying to protect Dravot and Carnehan. The two characters are mostly different, but they do some show similarities. The changes Huston makes to Kipling’s short story makes the film more light and humorous. He portrays the characters of Billy Fish, Carnehan, and Dravot with many differences, but some similarities to Kipling’s characters. The changes he makes to the characters is for added humor. For example, when Dravot asks Billy Fish if the Kafiristan people always use such a big ball when playing a game that is similar to polo, which he replied “Depend on size of man’s head. Big head, big ball, small head, small ball. That Bashki man. Oh big damn head” which is a twisted way is a humorous way to look at playing a game with a human head.

Also how when Carenhan is saved from the temptation, of breaking their contract when Dravot walks into the room while one of Ootah’s daughters is trying to seduce him. He says this after she leaves to Dravot“Danny, let us seek safety on the battlefield” It is humorous because he says it as if the battlefield would be safer than being in the company of a seducing woman. Lastely, Huston made the film more humorous by how he had the character Dravot say multiple entertaining things throughout the movie.

Such as, when he said “Now listen to me you benighted muckers. We’re going to teach you soldiering. The world’s noblest profession. When we’re done with you, you’ll be able to slaughter your enemies like civilized men” when he and Carnehan were trying to teach the Kafiristan men how to be soldiers. Also, when Dravot said this to the soldiers too “You are going to become soldiers. A soldier does not think. He only obeys. Do you really think that if a soldier thought twice he’d give his life for queen and country? Not bloody likely” When Dravot says those things; it gives the film more humor to the story. Compared to Kiplings short story which did not have much humor in it, Huston defiantly lightened up the “The Man who would be King” with this humorous side of the story.

Characters in Rudyard Kipling's The Man Who Would Be King and John Huston's Version. (2021, Sep 27). Retrieved from https://studymoose.com/characters-in-rudyard-kipling-s-the-man-who-would-be-king-and-john-huston-s-version-essay 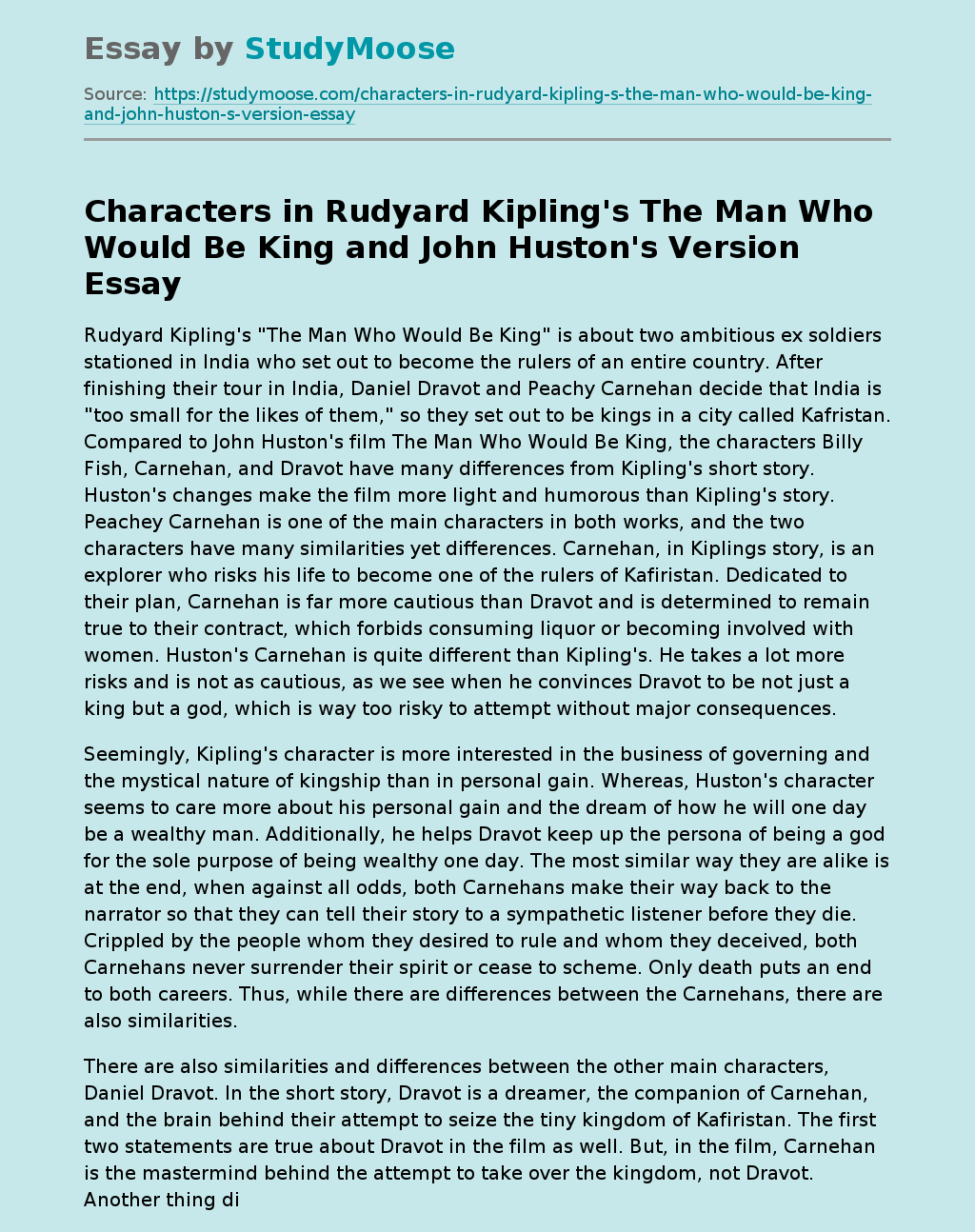