1. Sophistication- Sherwood Anderson
2. Big Two- Hearted River- Ernest Hemingway
3. Winter Dreams- F. Scott Fitzgerald
4. The Bear- William Faulkner
5. The Catbird Seat- James Thurber
6. The Jilting of Granny Weatherall- Katherine Anne Porter 7. The Devil and Daniel Webster- Stephen Vincent Benet
8. Flight- John Steinbeck
9. Winter Night- Kay Boyle
10. Another April- Jesse Stuart
11. A Worn Path- Eudora Welty
12. The Crop- Flannery O’Connor
13. The First Seven Years- Bernard Malamud
14. The Lucid Eye in Silver Town- John Updike
15. A Visit to Grandmother- William Melvin Kelley
16. Lost- Isaac Bashevis Singer
Characterization: Almost animalisticMrs. Torres and Pepe were the only protagonists. Mrs. Torres was flat, but Pepe was a round character. Pepe underwent indirect character development over the course of sever events. He began the book as a child, but faced his death with the confidence of a man. | Setting: This took place on a farm in Souther California, near the border of Mexico. Around 15 miles close to Monterey. It was in a harsh desert.

Themes: The theme is Pepe’s transition from boy to man.

At the beginning of the book, he was childish and had no respect for all that the adults in the community had to go through. By the end of the novel, he had experienced all of the worst that life had to throw at him. | Plot:Pepe, the protagonist, is a young teen who is sent by his mother into town for some medicine.

While there, he kills a man. When he returns home, his mother finds out and tells him he must go away.

On his journey away from home, he is being hunted by gunmen who want to avenge the death of the man who Pepe killed. After much running and even being shot, he is killed by these men.

Tone: The tone of this story is extremely suspenseful. The author has kept the reader on a hook to find out whether Pepe escapes the gunmen. The reader is desperate to know whether Pepe lives or dies.

| Style: John Steinbeck uses accurate depictions of the landscape and the characters to pull in the reader. He uses very long, in depth sentences to paint a picture in the head of the reader of what is going on in that scene. | 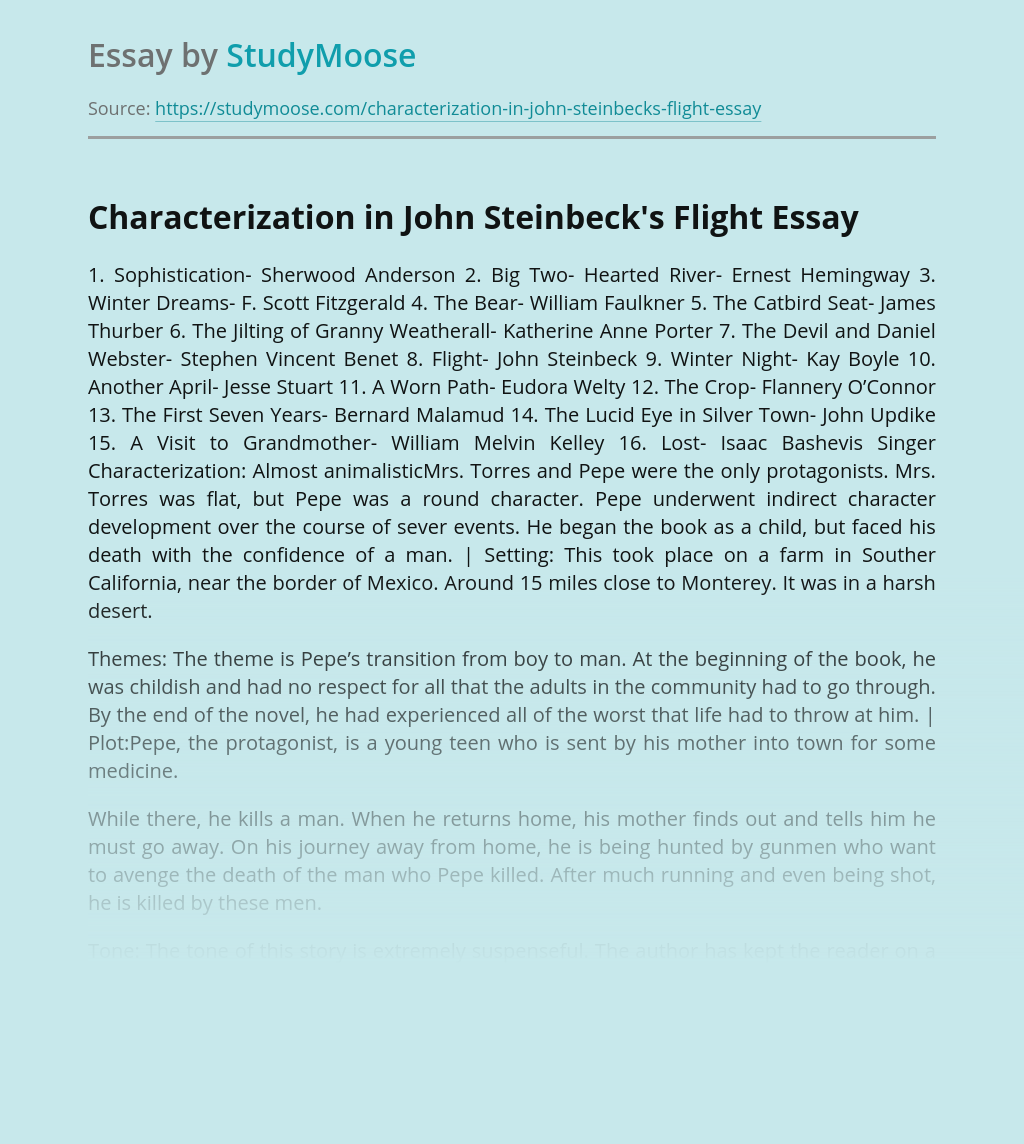 Turn in your highest-quality paper
Get a qualified writer to help you with
“ Characterization in John Steinbeck’s Flight ”
Get high-quality paper
Helping students since 2015
Stay Safe, Stay Original