Characterisation in The Shoehorn Sonata Play

The opening scene, with Bridie demonstrating the deep, subservient bow, the kow-tow, demanded of the prisoners by their Japanese guards during tenko, takes the audience straight into the action. As the interviewer, Rick, poses questions, music and images from the war period flash on the screen behind Bridie, and the audience realises they are watching the filming of a television documentary. The time is now, and Bridie is being asked to recall the events of fifty years earlier. This scene establishes who Bridie is, and introduces the audience to the situation: the recall and in a sense the re-living of memories of the years of imprisonment.

Don't use plagiarized sources. Get your custom essay on
“ Characterisation in The Shoehorn Sonata Play ”
Get custom paper
NEW! smart matching with writer

The revelation of the crises they have each faced is presented as a healing action, which leads to the resolution of their differences and a satisfying closure to the play.

Misto’s own motivations for researching these events and writing the play is made clear in his Author’s Note (p. 16). His perceptions of Australia’s neglect to honour such women as Bridie is suggested when she says: “In 1951 we were each sent thirty pounds. The Japanese said it was compensation. That’s sixpence a day for each day of imprisonment.” Introduction to Play Sheila’s arrival at the motel from Perth introduces immediately one source of friction between the two: they clearly have not been in touch with one another for many decades. Each is just finding out basic information as whether the other ever married or had children. The audience sees, too, that the warmth of Bridie’s greeting: “Gee it’s good to see you” is not reciprocated by Sheila. The audience wonders why not. The revelations by the end of Act One will finally show the reason.

The body language described on page 26 indicates the deep underlying tension between the two–yet the scene ends with their lifting the suitcase as they used to lift the coffins of the dead: to the cries of Ichi, ni, san—Ya-ta! Their shared experiences are a strong bond. The Shoe-Horn Sonata is divided into two acts: the longer Act One, with eight scenes, and a shorter Act Two, with six scenes. It follows theatrical custom by providing a major climax before the final curtain of Act One, which resolves some of the suspense and mystery, but leaves the audience to wonder what direction the play will take after the interval.

The action cuts between two settings: a television studio and a Melbourne motel room. The extreme danger the prisoners faced is indicated by Bridie during this exposition: over-crowded ships sailing towards an enemy fleet, the unpreparedness of the British garrison in Singapore for the invasion, the fear of rape for the women. Misto thus sets up some of the issues to be confronted during the course of the play between the Australian Bridie and the former English schoolgirl Sheila. Sheila appears in Scene Two, and the major conflict of the play begins to simmer.

Journey through memory For the rest of Act One, the shared memories of Bridie and Sheila become those of the audience, through the dramatic techniques Misto uses. In Scene Three, the audience is reminded of how young Sheila was when she was taken prisoner.

The voice of a teenage girl sings part of ‘Jerusalem’, the stirring and visionary song with words by English poet William Blake, and the mature Sheila joins in. (Later Bridie and Sheila sing it together. ) Bridie’s attitude from their first meeting as shipwreck survivors drifting in the sea is protective of Sheila. She sees her as “another stuck-up Pom”, and hits her with her Shoe-Horn to keep her awake.

Sheila has been taught by her snobbish mother to look down on the Irish, the label she puts on the Sydney nurse from Chatswood because of her surname. Further differences between the two surface in Scene Five, when the “officers’ club” set up by the Japanese is described. But by the end of this scene they are recalling the choir and “orchestra” of women’s voices set up by Miss Dryburgh. Scene Six opens with Bridie and Sheila in a conga line singing the parodies of well-known songs they’d used to taunt their captors and keep their spirits up Pain and tension.

Soon they are arguing, focusing on their differing attitudes to the British women who in Bridie’s view were “selling themselves for food” to the Japanese. The tension rises as more and more is revealed about the deteriorating conditions for the prisoners and the relentless number of deaths, especially in the Belalau camp. At the end of the Act, in a dramatic gesture, Sheila returns the Shoe-Horn. She had claimed to sell it for quinine to save Bridie’s life–but in fact as she now reveals she had been forced to sleep with the enemy to buy the medicine.

She extorts from Bridie the implicit admission that she would not have made that sacrifice for her. Bridie says nothing, but cannot face Sheila. Sheila is shattered by the realisation: “All these years I’ve told myself that you’d have done the same for me. [Calmly] I was wrong, though, wasn’t I? ” Act Two opens back in the studio, where Bridie and Sheila explain on the documentary the appalling conditions in the death camp of Belalau. Suspense is built by the revelation that orders had been given that no prisoners were to survive to the end of the war. The audience wants to know how there could have been survivors.

They also want to know how or if the tension in the relationship between the two women can be resolved. It becomes clear that the traumatised Sheila cannot in civilian life face any sexual relationship; nor has she felt able to return to Britain or to face remaining with her family in Singapore. She has led a quiet life as a librarian in Perth. Her nights are filled with nightmarish recollections about Lipstick Larry, and she drinks rather too much. In contrast, Bridie had been happily married for years to the cheeky Australian soldier who had waved and winked at her at Christmas behind the wire.

She is now widowed and childless. Ambush and resolution Misto is preparing an ambush for the audience. By Scene Twelve, Bridie’s “disgrace” is revealed. Spooked when she is surrounded by a group of chattering Japanese tourists in David Jones Food Hall, she runs away with a tin of shortbread and later pleads guilty in court to shoplifting. “I still lie awake cringing with shame” she tells Sheila. She could not explain the truth about her phobia to the court or to her family and friends. The effect on Sheila is more than Bridie expected. She now decides that she can be at peace only if she faces the truth in public.

She explains: “There are probably thousands of survivors like us–still trapped in the war–too ashamed to tell anyone. ” Bridie urges her not to. But in Scene Thirteen after they have recounted how they were eventually discovered and rescued, days after the end of the war, it is in fact Bridie who reveals the truth of Sheila’s heroism and self-sacrifice. She then finds the courage to ask Sheila to explain about her shoplifting arrest The scene ends with the declaration Bridie has waited fifty years for: “And I’d do it all over again if I had to….’cause Bridie’s my friend… ” The tensions between the two have now been resolved: the secrets are out, both the personal ones and the long-hidden information about the experiences of the women prisoners and internees. The brief and cheerful last scene shows their friendship restored, the Shoe-Horn returned to its rightful owner, plans made for a Christmas reunion, and, finally, the peacetime dance they had promised one another in the camp. The Blue Danube plays: “It is the music of joy and triumph and survival. ”

Characterisation in The Shoehorn Sonata Play. (2016, Sep 16). Retrieved from https://studymoose.com/characterisation-in-the-shoehorn-sonata-play-essay 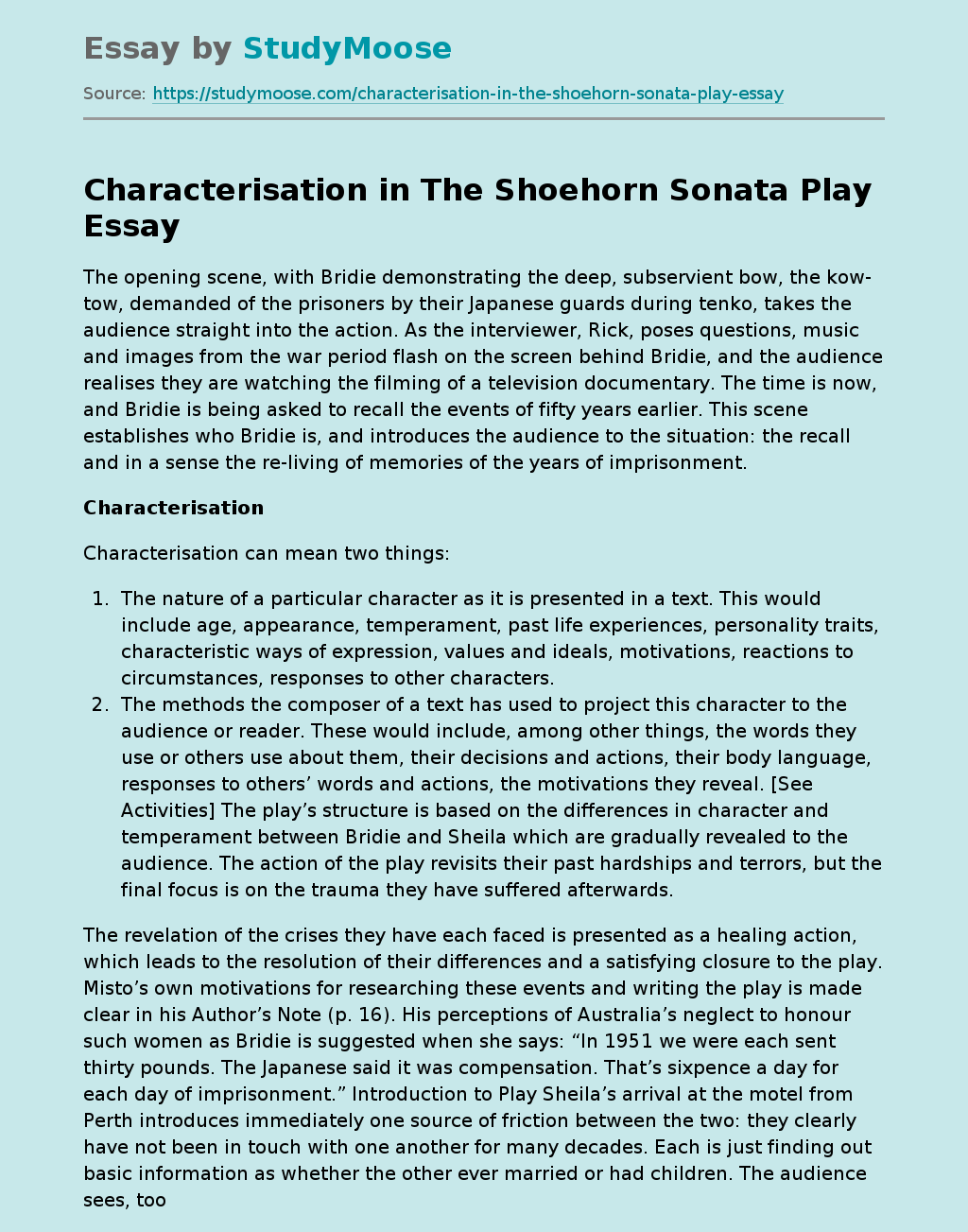