‘Miss Havisham’ is a bitter and twisted character from the novel ‘Great Expectations’ by Charles Dickens. Carol Ann Duffy takes this character and explores her tragic life in the poem ‘Havisham’. Duffy uses Dark themes, structure, symbolism and other poetic techniques to express Havisham’s hatred for men after her tragic wedding when she was rejected by her fiancé. Duffy’s use of these poetic techniques create a sinister character and makes Havisham feel real to the reader.

To begin the poem Duffy uses a shocking short sentence, which contains contrasting word choice to convey an ironic tone from Havisham.

Don't use plagiarized sources. Get your custom essay on
“ Character Traits of Duffy’s and Dickens’ Miss Havisham ”
Get custom paper
NEW! smart matching with writer

The contradictory oxymoron also startles the reader and grasps our attention as we do not expect this beginning. ‘Beloved sweetheart bastard.’ This contrasting word choice grasps the reader as it suggests a menacing narrative voice. The plosive ‘b’ sound repeated throughout the sentence creates a sinister mood as it is aggressive and sounds explosive and angry. This also suggests that she is writing a twister love letter to her past lover expressing her hatred toward him.

Following this Havisham begins to show more of her self-pity and self-disgust as she feels she is an in-complete woman, un-wanted and left abandoned. She shows this to the reader when she reveals her disgust with her marital status. ‘Spinster.’ Duffy’s use of a menacing narrative voice suggests that she is spitting this word out and the reader, we can hear that she loathes her loneliness and her isolated life.

This one word sentence is used not only to startle the reader but to emphasis Havisham’s bitter tone. The sharp hissing ‘s’ sound creates a sinister mood as it conveys feelings of hatred, anger and revenge from Havisham. This clear display of self-loathing makes Havisham a very sinister character and the menacing narrative voice makes Havisham feel real to the reader.

As the poem continues Havisham starts to show her mental decay as her language degrades down to sounds that only she can understand. She even begins to make animalistic screams which are symbolic of darkness and death. ‘cawing nooooo’ this neologism of ‘no’ suggests an animalistic persona where her sense of language has broken down to a series of noises which highlight her extreme mental decay. This also suggests her self-pity but makes the reader feel sympathy for the narrator as she desperately screams at the wall showing how lost and pathetic she has become over time. The ‘cawing’ is also symbolic of death and darkness as it is resembling a crow which the reader links with death, darkness and the devil. This combination of neologism and symbolism creates a sinister mood. Duffy’s use of neologism to emphasis Havisham’s mental decay makes her feel real to the reader and her animalistic person adds to her sinister character.

Duffy goes on to show Havisham’s layers of feelings as she expresses her exterior feelings of hatred, anger and revenge which contrast with her true feelings of love for her past lover. It is the rejection from her lover which sends her into this downward spiral which eventually results in her feelings of hatred for all men and desperate want for revenge. ‘love’s hate behind a white veil’ This oxymoron places love and hate side by side and conceals both emotions behind a symbolic white bridal veil, which is ironically white and contrasts with her hatful state. The veil also conceals her face, emotions and both her mental and physical decay which adds to the sinister mood. This menacing narrative voice continues to add to the sinister mood and Duffy’s use of the combination of symbolism and an oxymoron create a sinister character. The depth of feeling from Havisham through the use of this oxymoron also makes Havisham feel real to the reader.

Eventually Havisham’s self-pity combined with her mental decay makes for a dramatic conclusion to the poem as her emotions collapse and she is un-able to contain her feelings. She leaves the reader on an anti-climax as we are left wondering what happened to her in her vulnerable helpless state. ‘Don’t think it’s only the heart that b-b-b-breaks.’ Duffy uses ambiguity to give several interpretations of the ending as we are un-sure as to how Havisham finishes. The repeated ‘b’ sound could be the last beats of her breaking heart, it could be her voice breaking as she remembers her fate, it could be her last words as she finally emotionally and physically breaks down. It is the uncertainty of Havisham’s end that creates a sinister mood and makes her feel real to the reader.

In conclusion, ‘Miss Havisham’ a character from the novel ‘Great Expectations’ by Charles Dickens is further explored in the poem ‘Havisham’ by Carol Ann Duffy. In the poem Duffy reveals Havisham’s sinister character and makes her feel real to the reader. Duffy accomplishes this through the use dark themes to express Havisham’s sinister character and a menacing narrative voice is used to make Havisham feel real to the reader. Duffy also uses symbolism, word choice and other poetic techniques to emphasis Havisham’s bitter and twisted character. The sinister mood is created throughout the poem as Havisham exposes her hatred for men and shows her physical and mental decay as she has been isolated from the world for so long. 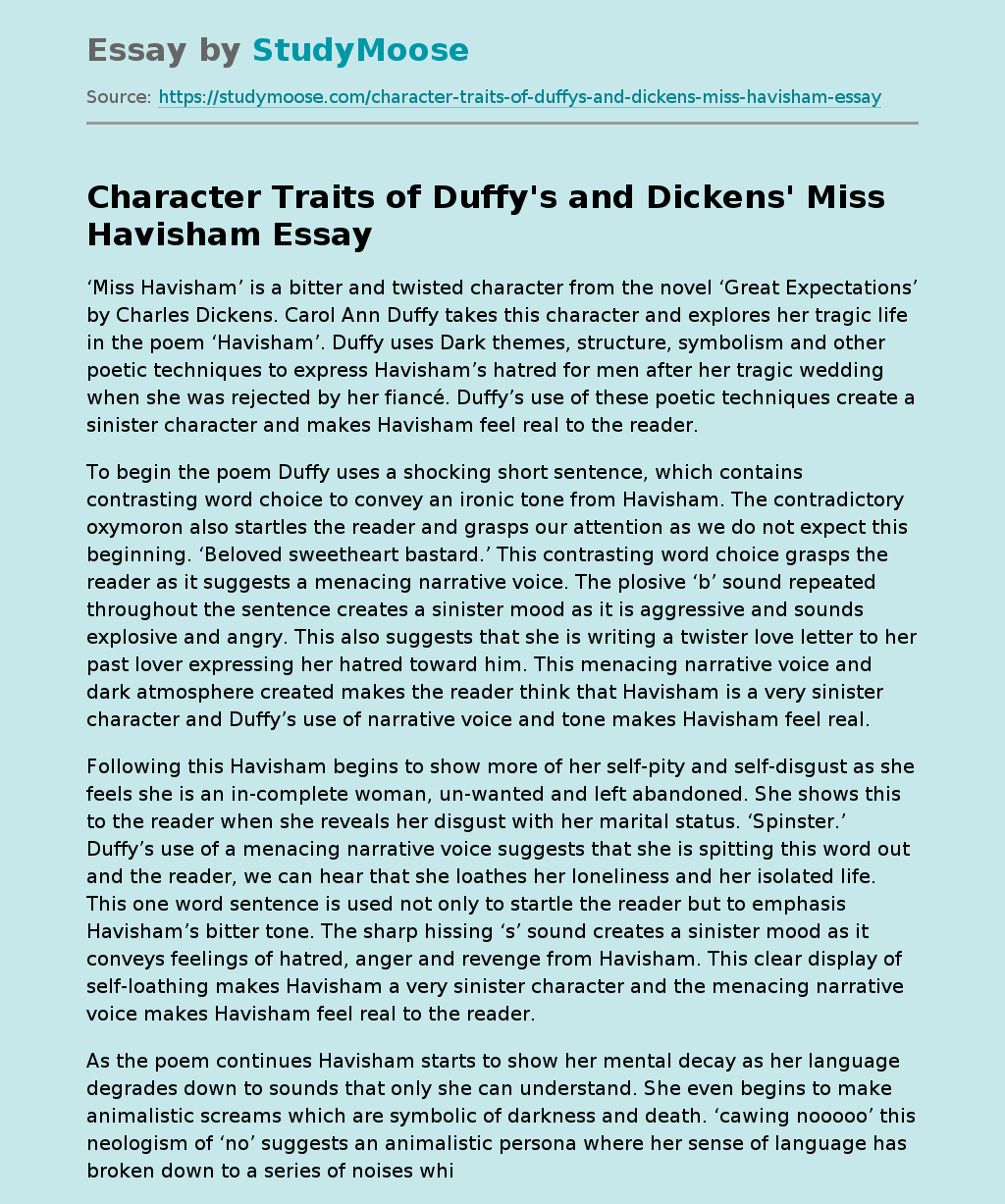