The film strictly ballroom directed by Baz Lurmann is a drama/comedy about peoples attitudes towards dance and other cultures. A character that makes a dramatic change is Scott Hastings. He changes from being smug and self centred to being accepting of other cultures and that other people can be successful with the help of family and friends.

Scott is a very arrogant, self centred person before he properly meets Fran. His mother Shirley has a great influence on his behaviour.

Turn in your highest-quality paper
Get a qualified writer to help you with
“ Character Study: Scott Hastings ”
Get high-quality paper
NEW! AI matching with writer

“Half of the trophies in this room were won by Scott.” Shirley shows Scott that is alright to be rude to people and that the world only revolves around him. In Les Kendall’s dance studio, Scott is irritated by les and Shirley because they showed their disgust about Scott dancing his own steps and rebelling against Les and Shirley. This causes Scott’s partner Liz start dancing with the dancing champion Ken Railings, also Scott’s arch enemy. “I don’t want us to end up like that drunk Ken Railings.

The director shows Scott’s reaction to this by using extreme close ups to show his facial expressions and mid shots to show his body language to the people around him. At the end of the scene Fran approaches Scott and asks to dance with him. This triggers the changes that Scott starts to make.

Scott changes due to Fran approaching him and asking o dance with him, “Look what you’re carrying on about? You’re going to wake up tomorrow and feel like a real idiot about it.

” Scott decides to give Fran a chance at dancing and realises that Fran can really dance. In the Fiesta scene Baz Lurmann uses the opportunity to reveal Scott. Rico confronts Scott about the kind of dancing Scott is doing with Fran and Scott lies to Rico and says that he has been practising the Pasa Doble, Scott then tries dancing the Pasa Doble, but soon learns that it is the wrong dance because the people at the Fiesta start to laugh at Scott for dancing the wrong dance.

“What, why are you all laughing at me?” Rico starts to dance the Pasa Doble and Scott joins in. The director uses this dance off to reveal the fact that Rico is Scott’s contrast and the extreme close ups on both of the dancers feet. This symbolises that Scott respects Rico and learns that he has to earn respect and not be given it like a handout. In this scene Rico is wearing a genuine matador’s jacket to show Rico has an upper hand on dancing the Pasa Doble. Scott also realises how he acted before he met Fran and Rico and his behaviour towards people ho he thinks are ‘below’ him.

The ending sequence is another sequence that also changes Scott. This is the scene where Shirley pressures Scott into dancing with Liz after her new partner Ken Railings dumps her. Fran sees Scott and starts dancing in beginners dancing. “Fran is back in beginners where she belongs. Scott sees Fran upset and shows his true colours and feelings about Fran. Finally Scott realises Fran is the right dancer for him and this is also the time when Doug tells Scott the truth about his and Shirley’s past.

“Son, can I bend your ear for a tick.” In the dance sequence following what Doug revealed to Scott, he realises that Fran and her culture is important. The matador jacket which Rico wears in the earlier Fiesta scene is now worn by Scott to symbolise the respect and knowledge he has gained through Rico and Fran. Scott now reveals his feelings for Fran by kissing her.

Therefore the character Scott changes from an arrogant self-centred boy to a courageous admiral character. This is shown though the three main scenes when Scott feels challenged. In the opening scene Scott thinks of Fran and all of the people who cannot dance as good as him like they should look up to him but in the Fiesta scene, Rico and the Spanish community laugh at Scott proving his theory wrong. Scott’s new sense of respect leads through to the ending sequence when Scott portrays freedom and the sense to respect everyone, no matter what culture they are. 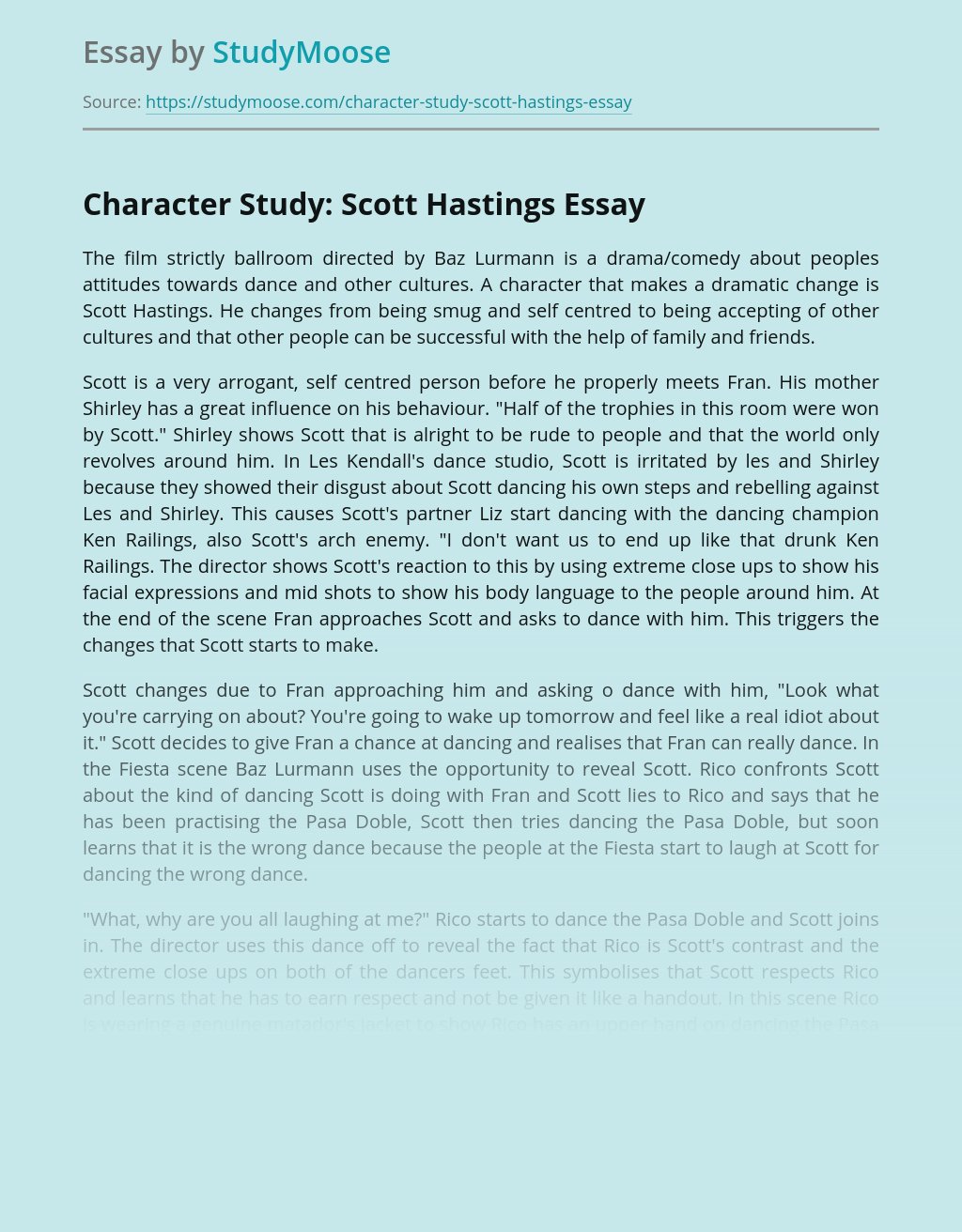 Turn in your highest-quality paper
Get a qualified writer to help you with
“ Character Study: Scott Hastings ”
Get high-quality paper
Helping students since 2015
Stay Safe, Stay Original