Don't use plagiarized sources. Get your custom essay on
“ Character Sketch of Macbeth ”
Get custom paper
NEW! smart matching with writer

That is why their words excite him so much. Banquo, on the other hand, is unmoved by the sweet promises of the evil forces. To make matters worse, Macbeth has a wife who is determined to fan up his ambition. Instead of acting as a restraining influence on him, she pushes him along the path of murder. Her role in the story is that of the fourth witches of the play.

Macbeth is introduced to us first in absentia.

In the opening scenes, we hear every other character praising him to the heights. In fact, we find a regular contest in paying tributes. This way a noble image of Macbeth is built in our minds. So when he makes his appearance we are ready to worship him as a superman. It is the bravery of Macbeth that is stressed by one and all at this stage. He is described as the life and soul of the Scottish army. He is spoken of as Bellona’s Bridegroom and Valour’s minion.

Even in the later scenes of the play, we never see this physical courage leave him. In the Banquet scene, the ghost of Banquo only provokes him. It cannot frighten him. In the final battle, he fights and dies like a hero.

When the play opens, we find Macbeth very much under his wife’s influence. He does not do anything without consulting her. She is his guide, philosopher, and friend. The hero who leads armies in the battle is a zero at home led by his wife. However, as time passes, a big change comes over their relationship. The murder of Duncan touches off the process of separation. When Macbeth orders the murder of Banquo, he does not consult his queen. Ultimately, the emotional separation is so complete that Lady Macbeth’s death does not move him. He talks like a philosopher.

Macbeth is highly imaginative by nature. He is so full of imagination that he experiences hallucination many a time. He sees a dagger hanging in the mid-air just before proceeding to Duncan’s bedroom. Later, in the Banquet scene, he beholds the ghost of Banquo. Neither the ghost nor the dagger is seen by anyone else.

Innately, Macbeth is a man full of kindness and sympathy. He hesitates for a long time before murdering Duncan. He commits the murder only because he is forced by Lady Macbeth. This inner conflict is the direct result of this goodness in him. We find Lady Macbeth referring to this quality in him just after reading his letter. She complains that Macbeth’s nature is too full of the milk of human kindness. However, he becomes a different man as soon as he commits the first murder. Once he tastes blood, he becomes a man-eater. He starts slaughtering people indiscriminately. He takes delight in wading through human blood.

Yet, in spite of all these gruesome crimes, Macbeth never loses our sympathy. What we feel is no revulsion but pity. We feel sad at the colossal waste of his energies and talents. Properly, directed, the genius of a man like Macbeth could have richly benefitted mankind. A man with his skill and imagination could have irrigated the deserts of Africa or unified the peoples of Asia and Europe. But by an irony of fate, all that vitality was misdirected towards death and destruction.

Lady Macbeth is perhaps the most complex female character in Shakespeare. She has been described as the ambition and despair of Shakespearian actresses. Critics hold diametrically opposed views about her. According to some, she is the fourth and worst witch in the play. According to some others, she is a normal woman spoiled by abnormal ambition. They point out that she has to unsex herself in order to participate in the murder. Even in the midst of manly determination, she reveals flashes of feminine tenderness.

The character of Lady Macbeth undergoes much change in the course of the play. In the earlier scenes, she is an object of horror, while in later scenes she is an object of pity. The development of Macbeth’s character is in the reverse order. Even her role in the story undergoes a corresponding change. In the early scenes, she is the most active character. She is the driving force behind all Macbeth’s actions. It is she who plans out all the details of Duncan’s murder. When at the eleventh hour, Macbeth hesitates, it is she who provoke him to action. When the appointed hour comes, it is she who gives the signal to her husband. Finally, when Macbeth leaves the work incomplete, she goes and completes it. In her inspiring dedication to the chosen task she reminds us of Joan of Arc.

But once the chosen job is done, she relapses into inactivity. The rest of the play depicts her as a tired and passive queen. Only in the banquet scene and that too for short time, do we find her once again endowed with superhuman energy.

In her ability to manage a thing, she excels her husband by far. This will be clear if we compare the murder of Duncan with that of Banquo. While Lady Macbeth stage-manages the first, the second is a job which Macbeth undertakes alone. And what a crudely managed show it is. It exposes his villainy to one and all. Thus, with the loss of his wife’s guidance, Macbeth starts losing everything.

Many facts testify Lady Macbeth’s strength of mind. She rarely gives out her inner secrets. There are no long speeches uttered by her. Even when she is filled with frustration, she never lets others know of it. It is significant that she confesses her guilt only during her sleepwalking. Only in sleep, when she has no control over herself, does she reveal the torments of a guilty soul.

As already pointed out, a complete change comes over Lady Macbeth with the progress of events. The sinner almost turns into a suffering soul. Like Shylock in “The Merchant of Venice”, she becomes a tragic character at the end.

The last that we see of Lady Macbeth is in the sleep-walking scene. Her death is only reported later not shown on the stage. Even the details of her death are left vague. We do not know whether it is death or suicide. But with that little scene of sleep-walking, Shakespeare manages to win all our sympathies for his heroine. The pathos of her situation is summoned up in the sentence. “All the perfumes of Arabia will not sweeten this little hand”. When all is over it is the desolate figure of a tormented queen that haunts our memory.

Another point of difference between classical tragedy and Shakespearian tragedy is in the mixing of tragic and comic elements. Classical plays are either pure tragedies or pure comedies. Shakespeare generally introduces tragic scenes in his comedies and vice-versa. In Macbeth, a highly comic scene is introduced just after an intensely tragic scene. Porter’s scene comes right after the murder scenes. Similarly in Hamlet, we have the Grave-digger scene after a scene of the tragedy. Shakespeare introduced such scenes probably because he wanted to portray life in its real form. What he wanted was to hold a mirror up to nature. As we all know, human life is an illogical mixture of tragedy and comedy.

The nature of Shakespearian tragedy has been well defined by A C Bradley. According to him, Shakespearian tragedy always deals with the fall of a great man. The hero is the king of a country. His rise and fall affect the fortunes of a whole nation. Similarly, in “Antony and Cleopatra”, the hero is one of the greatest figures of Roman history. Antony ruled Rome when Rome ruled the world. The heroes of King Lear, Othello, and Hamlet are also men of royal eminence.

The hero with this tragic flaw in him is placed in a peculiar situation. In this situation, a man with another flaw might succeed. Macbeth is brought into contact with the witches. They awaken his sleeping ambition. Lady Macbeth further whets his ambition. This paves the way for his fall.

Another important feature of a Shakespearian tragedy is the inner conflict in the hero. Shakespearian tragic heroes are pulled in opposite directions by opposite forces. For example, Macbeth’s mind is divided between love for Duncan and lust for power. In his conflict, his ambition wins and, therefore, he is ruined. In the case of Antony, the conflict is between love for Cleopatra and love for Rome. In Brutus, it is between love for Caesar and love for his country. Because of this inner conflict, the hero is able to win our sympathy. The presence of conflict is evidence of some good in the person. A completely wicked man cannot have any conflict in his mind.

The end of a Shakespearian tragedy is unique. Shakespearian tragedy does not end on a note of grief. It ends on a note of relief. We get the feeling that death is the best possible solution for the problems of the hero. In the case of Macbeth, we do not want to see him either victorious or defeated. What we want is that he should die a noble death, and that is what he does. 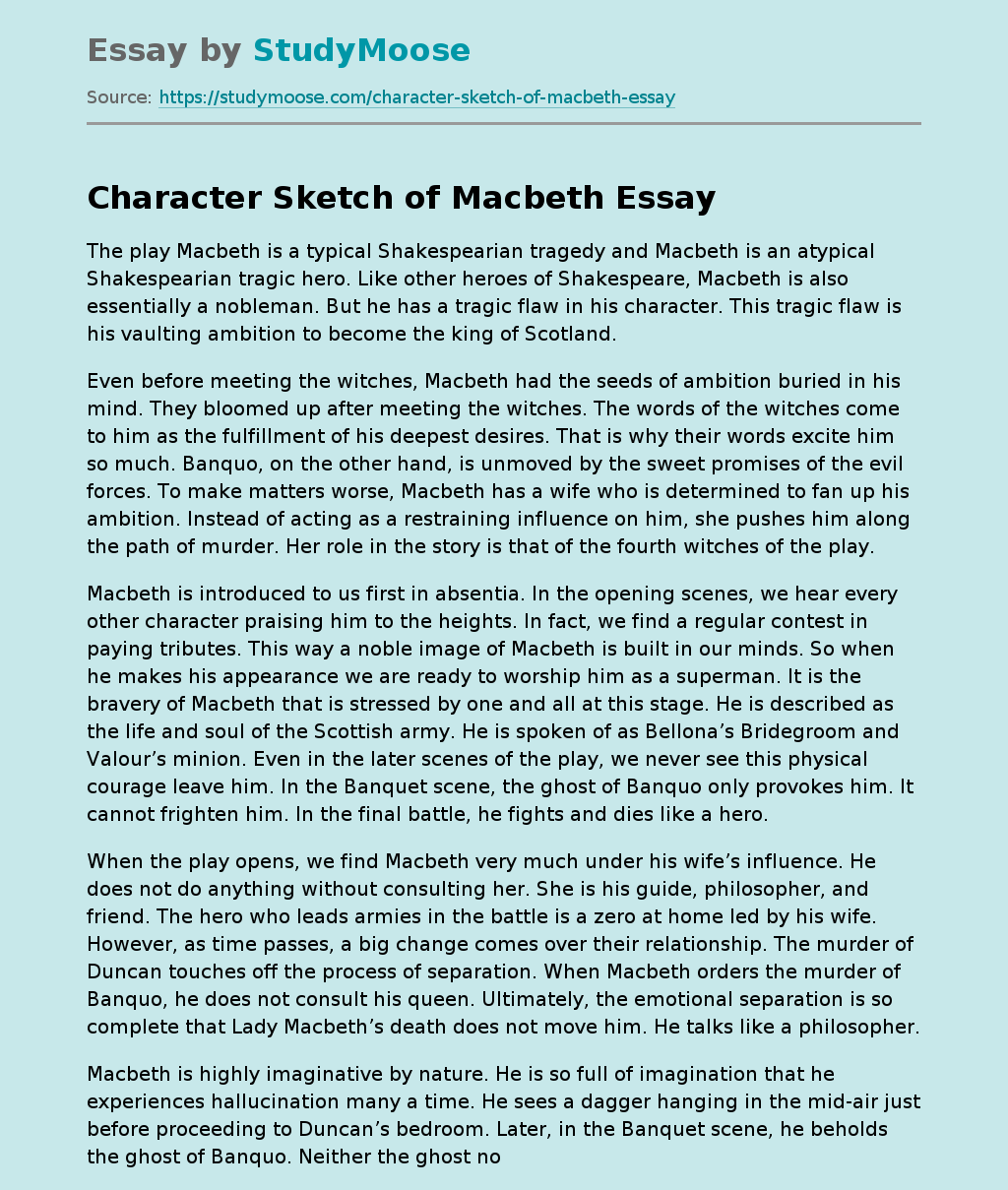