Bassanio’s character is more fully drawn than Antonio’s, but it does not possess the powerful individuality that Shakespeare gives to his portraits of Portia and Shylock. First off, when one begins considering Bassanio, one should dismiss all the critics who condemn him for his financial habits. Bassanio’s request to Antonio for more money is perfectly natural for him. He is young; he is in love; and he is, by nature, impulsive and romantic. Young men in love have often gone into debt; thus Bassanio has always borrowed money and, furthermore, no moral stigma should be involved.

Don't use plagiarized sources. Get your custom essay on
“ Character Sketch of Bassanio ”
Get custom paper
NEW! smart matching with writer

Shakespeare needs just such a character in this play for his plot. If Bassanio is not a powerful hero, he is certainly a sympathetic one. First, he has some of the most memorable verse in the play — language which has music, richness, and dignity. Second, he shows us his immediate, uncalculated generosity and love; this is especially obvious when Bassanio, who has just won Portia, receives the letter telling him of Antonio’s danger.

Bassanio is immediately and extremely concerned over the fate of Antonio and is anxious to do whatever is possible for his friend.

Here, the situation is melodramatic and calls for a romantic, seemingly impossible, rescue mission. When at last Bassanio and Portia are reunited, he speaks forthrightly and truthfully to her. He refuses to implicate Antonio, even though it was at Antonio’s urging that he gave away his wedding ring to the judge who cleverly saved Antonio’s life: “If you did know,” he tells Portia, “for what I gave the ring / And how unwillingly I left the ring .

. . You would abate the strength of your displeasure. ” No matter how powerful the circumstances, he admits that he was wrong to part with the ring because he had given his oath to Portia to keep it.

As the play ends, Bassanio’s impetuous nature is once more stage-center. Speaking to his wife, he vows: “Portia, forgive me this enforced wrong; . . . and by my soul I swear / I never more will break an oath with thee. ” Of course, he will; this, however, is part of Bassanio’s charm. He means it with all his heart when he swears to Portia, but when the next opportunity arises and he is called on to rashly undertake some adventure full of dash and daring, he’ll be off. Portia knows this also and loves him deeply, despite this minor flaw. 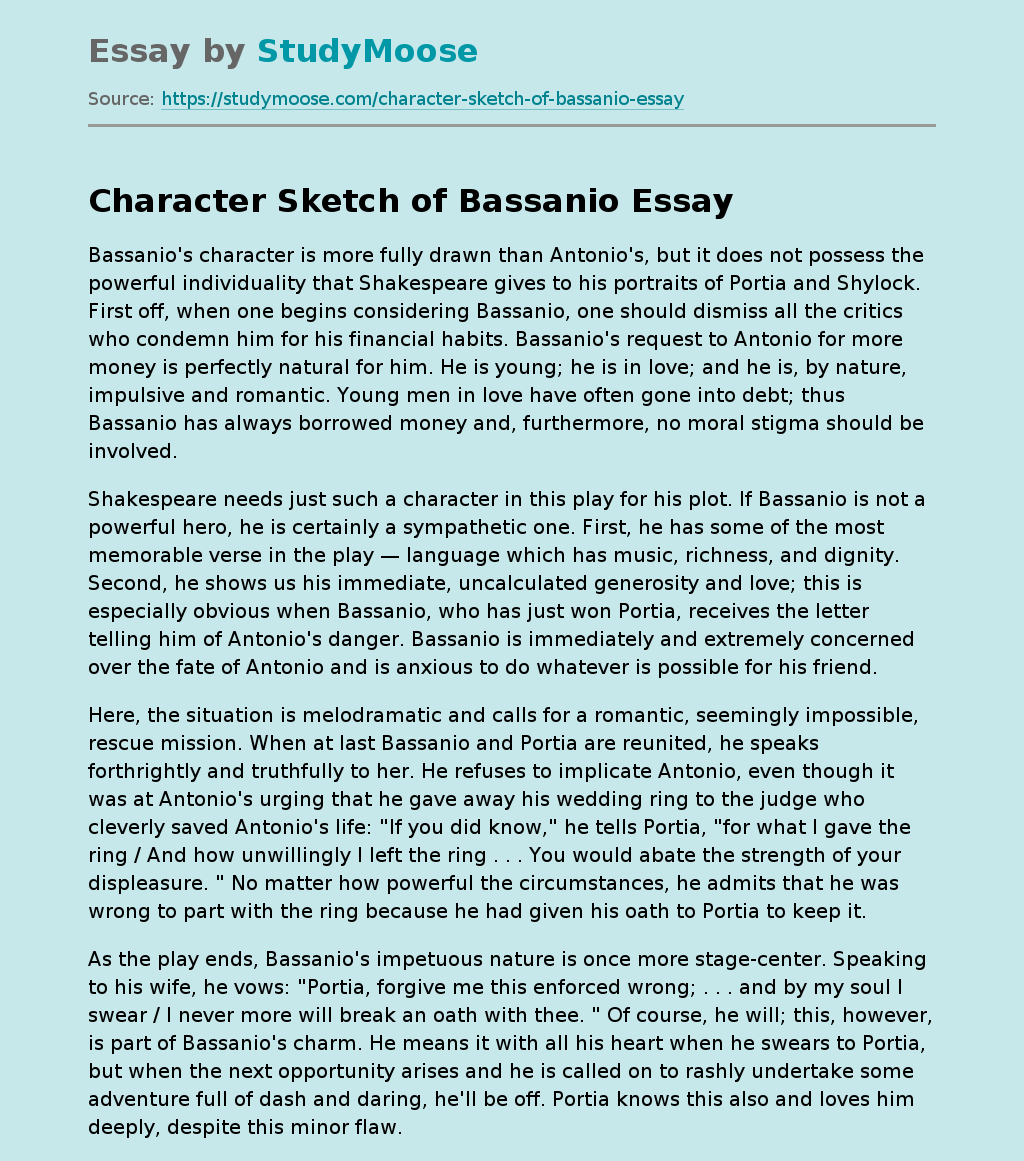