Character of Kurtz in Joseph Conrad's “Heart Of Darkness”

Kurtz is arguably the most important character in Joseph Conrad’s novella, “Heart Of Darkness”. Many scholarly articles have been written on this somewhat mysterious character over the years since this novella’s publishing. And with good reason, because he is what the story revolves around and throughout it we learn many things about him. Kurtz is a character who changes greatly throughout the story and in my opinion he changes and transforms greatly by transgressing and regressing.

Before getting into more detail I’d like to make clear what a transgression is.

Don't use plagiarized sources. Get your custom essay on
“ Character of Kurtz in Joseph Conrad’s “Heart Of Darkness” ”
Get custom paper
NEW! smart matching with writer

A transgression, in this case, is an act that goes against a law, rule, or code of conduct. When Kurtz is first mentioned in the story, he is introduced as someone who “‘…was at present in charge of a trading post, a very important one, in the true ivory-country, at ‘the very bottom of there. Sends in as much ivory as all the others put together…’” (17). In my opinion, this is a sign that there might be transgressive actions being committed here because it is abnormal for Kurtz’s post to be sending in that much ivory.

As the story progresses, we learn more about Kurtz and how he has gone insane being in the jungle for an extensive amount of time trying to be the one that gets and sends back the most ivory. At one point in the story Kurtz says, “My Intended, my ivory, my station, my river…”(47). Marlow continues by saying “…everything belonged to him.

It made me hold my breath in expectation of hearing the wilderness burst into a prodigious peal of laughter that would shake the fixed stars in their places. Everything belonged to him—but that was a trifle. The thing was to know what he belonged to, how many powers of darkness have claimed him for their own” (47). What Marlow means by this is that his insanity has led him to become obssesed with all the things he has come to find in the Congo and also all the things he has acquirerd because of his success finding these things.

Further along in the story, we learn that Kurtz’s greediness had gotten him to the point where he would do anything to get his ivory. While having a brief social intercourse with the Russian trader, Marlow learns that Kurtz had made himself appear as a god or supernatural being to the natives. The Russian says that Kurtz had gone on many expeditions looking for ivory and on those trips he would discover villages and meet natives and “‘They adored him…’”(54). He also says that Kurtz had gotten to the point of almost shooting him for a small amount of ivory. ‘He declared he would shoot me unless I gave him the ivory and then cleared out of the country, because he could do so…’ (54). This shows us that Kurtz’s desire and greed for ivory has taken him to the point where he would do something that in his native country is seen as something only a deranged lunatic would do. But Kurtz wasn’t always an insane, greedy man which is where my belief of his regression comes in.

In this case a regression means a return to a former or less developed state. Before meeting Kurtz personally, Marlow learns that he was very extremely educated and had a very high potential to be someone powerful. Close to the beginning of the story, Marlow gets into a conversation with the brickmaker of the first station and they eventually start talking about the esteemed Mr. Kurtz. This is where we learn about Kurtz’s great ability and potential when the brickmaker says “‘He is a prodigy’”(23) and also “‘He is an emissary of pity and science and progress, and devil knows what else.’”(23). The brickmaker makes it very clear to us that Kurtz has the potential to be very powerful with his talents and this is reassured to us when he says “To-day he is chief of the best station, next year he will be assistant manager, two more years and…but I dare say you know what he will be in two years’ time” (23). But, when Marlow gets to meet him in person, he is very different from what he thought he would be. He meets a Kurtz that is greatly ill and notably mentally unstable. He remarks this by saying “But his soul was mad. Being alone in the wilderness, it had looked within itself, and, by heavens! I tell you, it had gone mad.” (64).

As for his education, while Marlow is headed to the inner station where Kurtz is located, he says “The original Kurtz had been partly educated in England, and—as he was good enough to say himself—his sympathies were in the right place. His mother was half-English, his father was half-French. All Europe contributed to the making of Kurtz…” (48). This tells us that Kurtz is someone who comes from a background that is seen as one that is very educated and prestigous. This takes me back to my prior mentioning of Kurtz’s threat to kill the Russian trader. Since he was raised this way with all those distinguished backgrounds then it is easy to see how his greed has gotten rid of all those “good manners” and “ideal” ways to act that he once practiced. Many people can only imagine a wild animal or savage being capable of killing someone. This is a sign that Kurtz’s insanity has brought him back to a primal stage of human evolution where there was once no “ right or wrongs” and nothing was viewed as immoral.

As the story approaches its end, Mr. Kurtz unfortunately dies, but before he does, he says what might be the best known words in the story. As they are all headed back, Marlow hears Kurtz talking to himself. “He cried in a whisper at some image, at some vision,—he cried out twice, a cry that was no more than a breath—’The horror! The horror!’” (67). These words that Kurtz says can be interpreted as him remembering all the horrific things he did to get his ivory. This is where he reaches the realization that he did many immoral things and that he was carried away by his desire and greed of getting the most ivory. He finally sees the reality, and that is that his once good heart, had been completely transformed into a heart full of darkness.

Character of Kurtz in Joseph Conrad's “Heart Of Darkness”. (2021, Mar 19). Retrieved from http://studymoose.com/character-of-kurtz-in-joseph-conrad-s-heart-of-darkness-essay 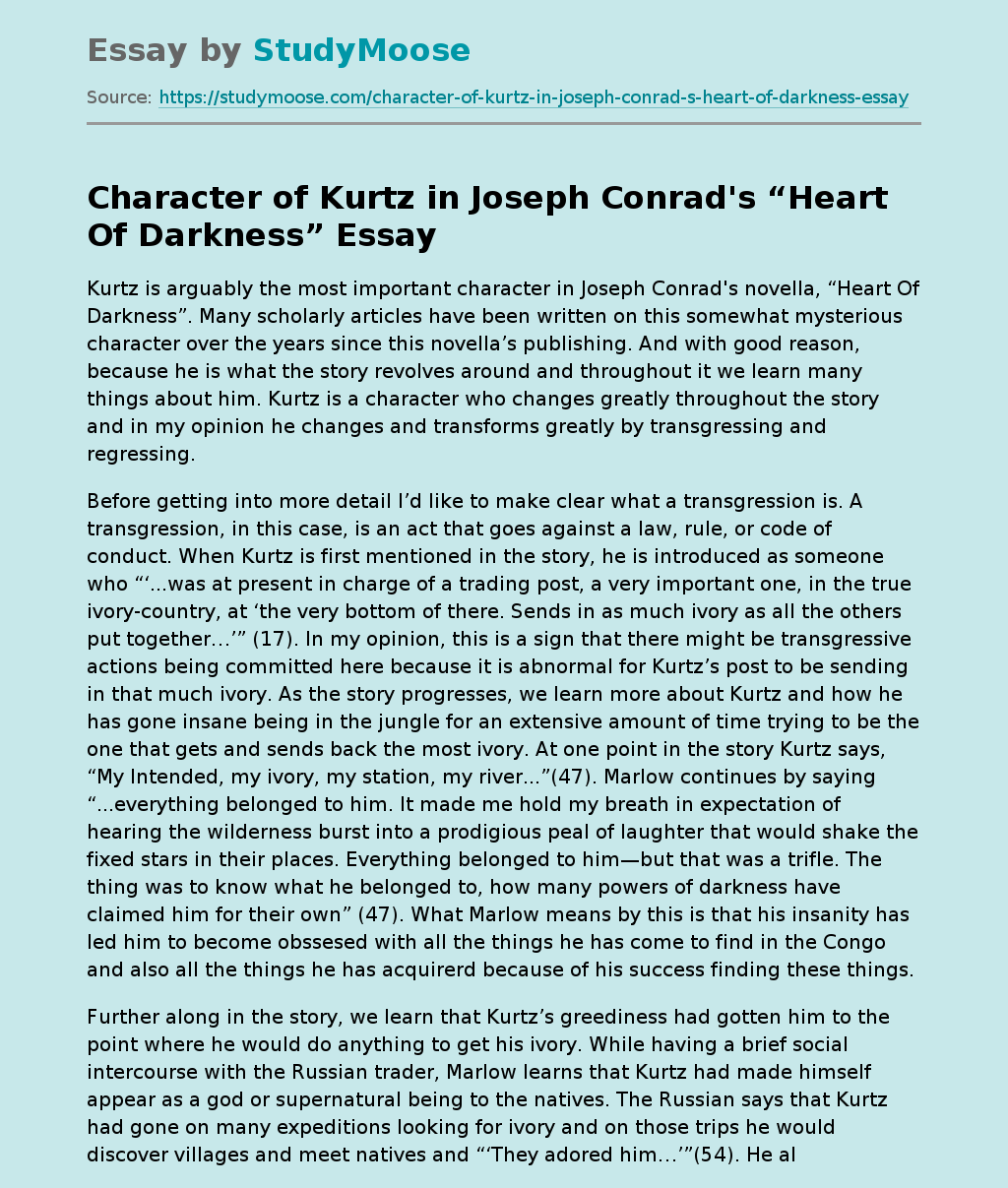