Character of Daisy in "The Great Gatsby"

In the book The Great Gatsby novel written by F. Scott. Fitzgerald, Daisy B is portrayed as a manipulative character. Throughout the whole book this is shown in various ways from the ups and downs in emotion, the naive mind in her scandalous relationship, and to her own actual affair that set her free from hurt. Daisy Buchanan, born Daisy Fay, is from a wealthy family in Louisville, Kentucky. Popular and beautiful, she was stunning to officers during World War I.

Don't use plagiarized sources. Get your custom essay on
“ Character of Daisy in “The Great Gatsby” ”
Get custom paper
NEW! smart matching with writer

She met and fell in love with Jay Gatsby, an officer at the time, and promised to wait for him to return from the war. However, she succumbed to pressure from her family and married Tom Buchanan instead. Eventually ending in a baby girl named Pammy.

Daisy in the book’s voice is given reign over a fool’s heart described here in the novel as the author glides through the introduction of characters “ I looked back at my cousin who began to ask me questions in her low, thrilling voice.

It was the kind of voice that the ear follows up and down as if each speech is an arrangement of notes that will never be played again.” ( Fitzgerald 33). Daisy’s voice is captivating and a lust call to men unknowingly. Though this is not her fault. Daisy mentally uses this to her advantage as shown by her superficial and senseless conversations with men. Daisy grew up spoiled and she is used to getting everything her way or no way at all.

The author shows this “She had told him that she loved him, and Tom Buchanan saw. He was astounded. His mouth opened a little, and he looked at Gatsby, and then back at Daisy as if he had just recognized her as someone he knew a long time ago.” Here Daisy uses her manipulative voice to enroll Gatsby in. This was not for real sparks but the entertainment of Daisy watching her affair man feel some type of way.

Although Daisy may be a very rich woman her mind is confused and she lacks knowledge. Daisy shows her confusion of life when she states “ I’m glad its a girl. And I hope she”ll be a fool. That’s the best thing a girl can be in this world, a beautiful little fool” (Fitzgerald 85). Here it is clear that Daisy has taken this statement and reiterated it into her life’s standards. The sad part is that Daisy believes that this ok and even wishes the foolish heart on her unborn. The actual foolish behavior that is deemed right by Daisy is that of being a manipulation at a young age and still having everything go her way. Even in her wrongdoing, her way is right the author clearly states “They’re such beautiful shirts, she sobbed, her voice muffled, in the think folds. It makes me sad because I’ve never seen such beautiful shirts.” ( Fitzgerald 120). What this shows is confusion because Daisy believes her sadness is from the shirt while in all actuality the sadness is from the realization of lost she has gained.

Daisy has a mentality of everything going her way and she doesn’t care who will be hurt in the process this reflects Daisy as selfish. In the book, it states “ Oh you want to much!… I love you now isn’t that enough. I can’t help what’s past. She began to sob helplessly.” ( Fitzgerald 130). This shows Daisy’s selfishness because she once had Gatsby and the true old love is not there anymore and she continues to hold onto him. Daisy has built up hurt and in that hurt that lingers for Tom, she still loves him. Her holding both in hand knowing Gatsby can be with whoever is selfish. Even when Daisy killed Myrtle the wretched mistress of her husband Daisy in her selfish ways let Gatsby take the blame for it all. Fitzgerald distinctively let readers know that all the pain Daisy endured would not go undone because she let her emotions get the best of her. The author stated “It all happened in a minute, but it seemed to me that she wanted to speak to us, thought we were somebody she knew. Well, first Daisy turned away from the woman toward the other car, and then she lost her nerve and turned back.’ ( Fitzgerald 160).

By the end of this, you have realized that this Daisy is not the flower well bloomed. Her soft white petals have easily being confused, and manipulated, distraught and hurt. Fitzgerald intricately lets this beauty fall from grace. Daisy shows on numerous occasions that everything will only work for you if it works in her favor. Though this is not Daisy’s own fault for the lifestyle given to her was not the greatest example of life. Daisy doesn’t know how to get things done the right way and forever more the injustice will be that she is lost in this world.

Character of Daisy in "The Great Gatsby". (2021, Mar 25). Retrieved from https://studymoose.com/character-of-daisy-in-the-great-gatsby-essay 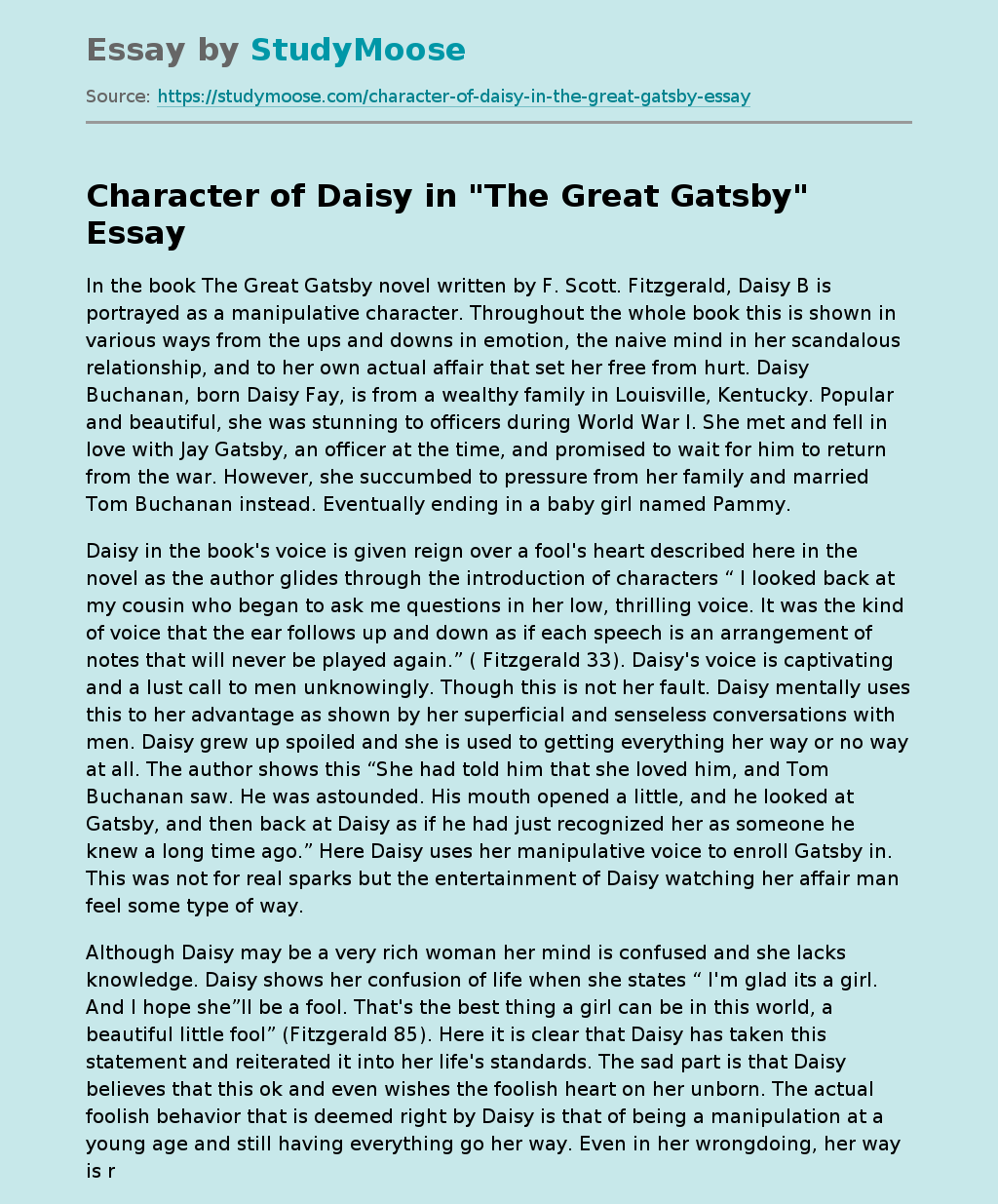