Character of Curley’s wife in Of Mice and Men

The novel Of Mice and Men was written in the 1930’s by a man named John Steinbeck. The book is set in America and at a time during the Great Depression. This was when the stock market had crashed some years prior, lots of companies went bankrupt, the banking systems failed and a massive soar in unemployment was witnessed. Also during this period of the Great Depression droughts were seen in the southern and western states of America with failed harvests in Kansas, Oklahoma, Arkansas and Texas.

Don't use plagiarized sources. Get your custom essay on
“ Character of Curley’s wife in Of Mice and Men ”
Get custom paper
NEW! smart matching with writer

The fertile grassland that once was, became desert like and the area became known as the “dust bowl”. During this time the women fitted into this society as the home keepers, the men would go out to earn money whilst the woman stayed home to ensure things ran along smoothly there. The key terms that I will be evaluating in this essay, is how Steinbeck portrays Curley’s wife and how he attempts to make the reader either feel dislike or sympathy towards her.

In chapter two Steinbeck describes Curley’s wife as a “tart”, this is a derogatory term used to describe a female who could possibly be “loose” or “promiscuous” even if they are not.

Even before the reader is introduced to Curley’s wife, Steinbeck begins to tempt the reader to dislike her. Further on in the chapter when she is being introduced for the first time, Steinbeck uses imagery to describe Curley’s wife, he writes about her “full rouged lips”, her “red finger nails”, the “bouquets of red ostrich feathers” and the “red mules” she is wearing.

Here the reader can see that Steinbeck is using connotations of the colour red. Red is seen as a provocative or seductive colour, it can also be seen as a colour of warning or danger. Here Steinbeck could possibly be trying to foreshadow future events to come. From this the reader may begin to already form a dislike towards Curley’s wife as it appears that she attempting to attract the attention of the workers on the farm, this would be an un-natural way for a married woman to behave. In chapter three Steinbeck continues to describe Curley’s wife in a negative manner. Steinbeck uses the term “jail bait” when she is being spoken about by the farm workers. The term jail bait is a metaphor as you cannot literally be a piece of bait that will end another up in jail.

A woman who is described as jail bait is somebody who attempts to look older than they actually are, and are possibly attempting to attract a suitor to take the bait, if this event comes to fruition the suitor could find himself serving a lengthy prison sentence. Further on in chapter three, Steinbeck writes about Curley’s wife as having “the eye” all the time, Steinbeck again is using a metaphor to descried Curley’s wife actions towards the farm workers. You cannot actually have the eye, what Steinbeck is doing is attempting to show the reader that she is always looking for attention and has to act in a provocative manner to obtain this. The reader may begin to feel strong dislike towards Curley’s wife now, as this is not the way any married woman should act. However it also begins to show the reader what a lonely existence it was for women during this era and possibly all that Curley’s wife actually craved was social interaction which is a basic need for any human being.

Steinbeck again could possibly be foreshadowing future events to come. In chapter four Steinbeck begins to touch more on the lonely existence for a woman during this period of time. Curley’s wife speaks about wanting to “talk to somebody ever once in a while” this again represents the loneliness that she may be experiencing and again possibly the cause for her acting in the manner that she does around the workers. Steinbeck here uses imagery as the reader can imagine Curley’s wife being completely alone from female contact and only having Curley to speak to and the farm workers when Curley is not around. Steinbeck could also be possibly foreshadowing future events to come. Further on in the chapter Steinbeck also creates an element of fear towards Curley’s wife, this is seen when she is talking with Lennie and Candy. Curley’s wife states to Candy that she could get him “strung up” on a tree when she is challenged by him. Steinbeck again is using imagery and a metaphor to describe what will have.

Being strung up is a referral to being hung, this would be done by making a noose at one end of a rope and hanging it over a branch and tying it to a tree, unfortunately a person then has the noose put over his head and then the rope is pulled tight and the person is effectively “strung up”. From this the reader may begin to feel a strong dislike to Curley’s wife even though she could possibly be lonely, the way she is going about getting the attention she craves is not the way to win people over. Making threats to a person who already may not get the best treatment, will only make them fear the consequences more if they are found out. In chapter five Steinbeck uses imagery to describe the way Curley’s wife quietly approached Lennie in the stable, the reader could feel that this is a sneakily way to get close to Lennie and then before he can get away from her she is upon him.

Steinbeck also describes Curley’s wife as having little “sausage curls”, Steinbeck is using personification to describe her hair, as in reality you would not have sausage as curls in someone’s hair, and again may be attempting to sway the reader to dislike her, also from this the reader may feel that Curley’s wife can be quite sly and cunning at times, the way that she approaches Lennie in the barn is not the norm if you are just strolling about, it must be a calculated act, knowing full well that she will catch Lennie alone. From this the reader may feel a strong dislike towards her, this is due to the fact that although she is married, she is still attempting to get one of the farm workers alone. It is almost like she cannot resist the temptation. And ultimately in the end if anything was to happen, the worker would move on and she would have knew victims to try and entice.

Throughout the novella the readers opinions of Curley’s wife may slightly sway from dislike to sympathy, this is because the way Steinbeck uses imagery to describe her at the beginning it is that of a loose and easy woman, craving the attention of men on the farm in an almost sexual and provocative manner even though she is recently married. This theme continues throughout the majority of the story at different intervals. She enjoys to wear red, she is always asking if anyone have seen her husband, she seems to relax more if they have not and enjoys the attention she attracts.

The reader may also feel sympathy for her as when Steinbeck describes her wanting company, this could possibly be a reason for her always hanging around the worker and looking for Curley. Ultimately I feel the reader will show great dislike towards her, the way she acts is not the correct way for a woman to act regardless of loneliness. I feel that Steinbeck is attempting to draw attention to how lonely life must have been for any person during that period of time. The struggles that they must have come over and lengths that some people would have gone to achieve that.

Character of Curley’s wife in Of Mice and Men. (2016, Sep 14). Retrieved from https://studymoose.com/character-of-curleys-wife-in-of-mice-and-men-essay 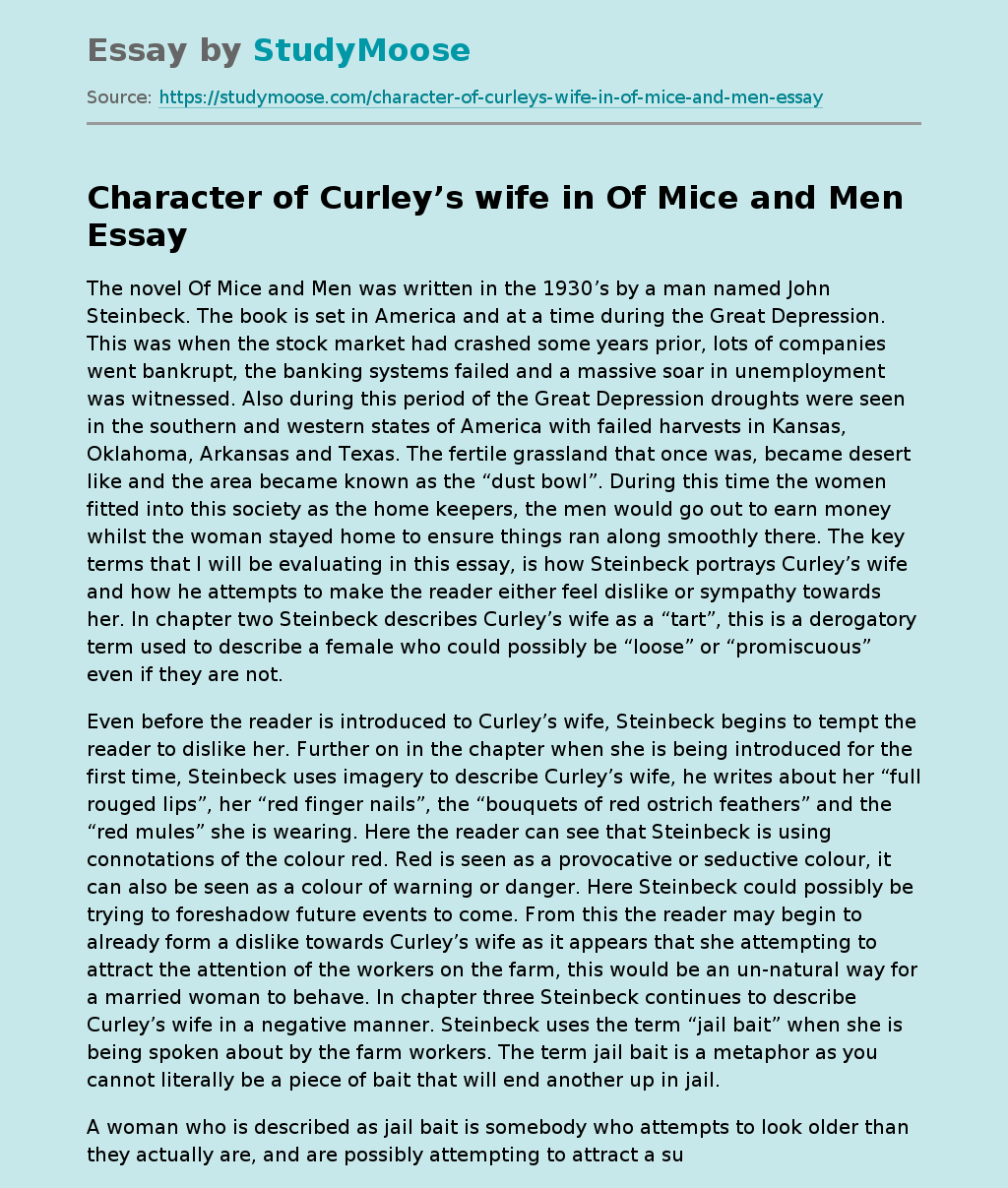