Character analysis of "The Hitch-Hiker" by Roald Dahl

The hitch hiker’s appearance was described as a small ratty faced man with grey teeth, rat like eyes, slightly pointed ears, wearing a cloth hat, greyish coloured jacket with enormous pockets. In other words, he looked like a human rat. In my opinion I think that Roald Dahl describes the hitch hiker similarly to a rat so that it makes the reader assume that the hitch hiker is probably a looney-toon, murderer or some other sort of criminal. Once the reader assume that, it will make them predict that something bad or interesting will happen involving the narrator and hitch hiker.

Turn in your highest-quality paper
Get a qualified writer to help you with
“ Character analysis of “The Hitch-Hiker” by Roald Dahl ”
Get high-quality paper
NEW! AI matching with writer

The hitch hiker’s appearance as a rat also predicts his personality. When normal human beings think of ratty type people, their stereotypical reaction will be that the person is selfish, backstabbing, dirty, smelly, disloyal, violent and probably a criminal.

At the beginning of the story, the narrator asks the hitch hiker why the he was going to the horse races if he wasn’t going to bet, the hitch hiker acts as if he didn’t hear the question and doesn’t seem to like it.

These actions predict that something is up, otherwise why wouldn’t he answer the question.

In the story, the hitch hiker has very fast hands. He managed to roll up a cigarette in just 5 seconds. He also managed to knick off the narrators watch, wallet, shoelace, driving license, key ring with keys, coins, a letter, a diary, and an expensive sapphire and pearl ring, belonging to the narrators wife.

When the hitch hiker speaks, he has an accent, for example he says, ‘guv’nor’ ‘od’carrier’. This lets the readers know that he is probably not from London, and from the country side.

The relationship between the narrator and hitch hiker is very surprising and unpredictable. It turns out that they become friends in the end despite the fact that the hitch hiker is a criminal and the narrator is a successful writer. I think that Roald Dahl teaches a little lesson in this story that even the two most opposite type people can have something in common and become friends.

Character analysis of "The Hitch-Hiker" by Roald Dahl. (2016, Jul 07). Retrieved from https://studymoose.com/character-analysis-of-the-hitch-hiker-by-roald-dahl-essay 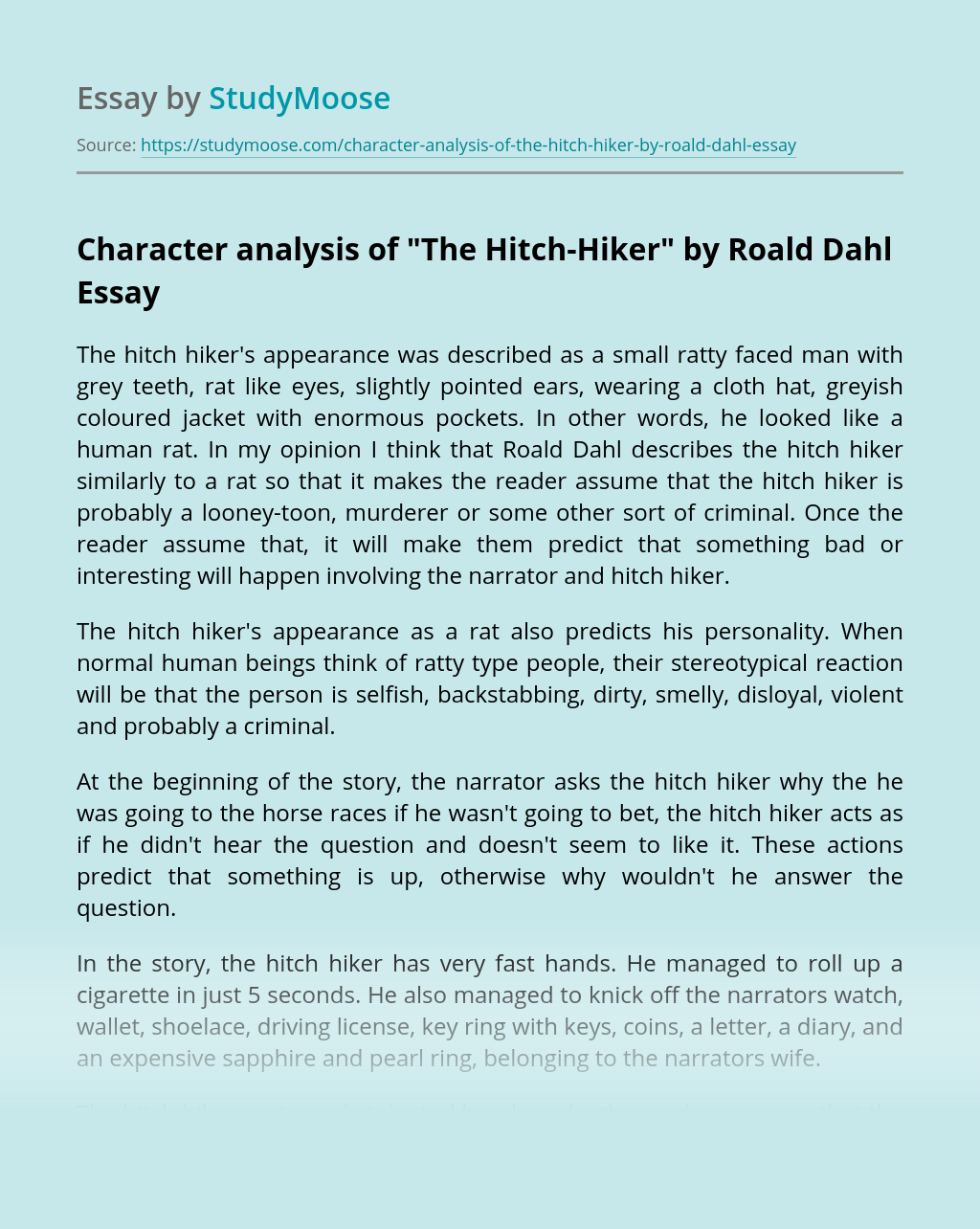 Turn in your highest-quality paper
Get a qualified writer to help you with
“ Character analysis of “The Hitch-Hiker” by Roald Dahl ”
Get high-quality paper
Helping students since 2015
Stay Safe, Stay Original