Kate Chopin’s “The Awakening” examines the implications placed on women for self expression during the 1800’s. Banned for several years by critics after its initial publication in 1899 because of its unsettling content, “The Awakening” later became a most cherished account of a woman’s journey towards self-discovery and abandonment of her conventional society. Kester-Shelton) Within that story is where we meet Robert LeBrun, A young, flirtatious and confident womanizer with a reputation to match and it is within this paper, that we will analyze the influential character of Robert LeBrun who without control, falls in a forbidden love affair with the protagonist, Edna Pontellier.

Don't use plagiarized sources. Get your custom essay on
“ Character Analysis of Robert Lebrun ”
Get custom paper
NEW! smart matching with writer

Edna Pontellier, triggering her to go through a series of epiphanies or so-called awakenings where she begins the struggle between the woman her society expects her to be and the independent, self-governing woman she craves.

Robert, sifting his way in between dynamic and static characteristics, plays a significant role in those epiphanies because what begins as an innocent friendship turns into a forbidden love affair where Robert shows Edna a kind of love she had never seen from any other man, even in her own marriage to Mr. Pontellier.

Even though Robert did possess such a reputation of being a womanizer he really does harbor true feelings of love for Edna.

Mrs. Pontellier was glad he had not assumed a similar role towards herself. It would have been unacceptable and annoying. ” (Chopin, page 14-15) This really shows the affection he conceals for Edna because he remains consistent with his portrayal of his feelings rather than with both serious and comic aspects during discussions. Even though throughout his summers of courting older married women, himself nor his intensions are ever taken seriously, even his relationship with Edna starts out innocent when she treats him as if he were a pet, dragging him along with her like a dog.

According to Edna he was “always under her feet like a troublesome dog”. (Chopin, page 26) But as their summer progresses, she falls for Robert and realizes she has her own strength and the power to express herself without her husband and it was Robert that led her to that. Their affair turns into actual love and Edna, along with the readers, begins to picture Robert as physically attractive, charming, and charismatic and sees in him, all the things Edna cannot find in her husband.

When Robert realizes his true feelings for Edna, he flees to Mexico in hopes of forgetting about her, and in a moment of weakness he decides that he is not brave enough to follow through on his new found love for Edna and it could never be real because Edna is a mother, and most importantly, a married woman. Robert feels that his leaving will only protect the both of them from acting upon his forbidden love, but this only heightens Edna’s awakening. The shock of Robert’s quick announcement of his departure to Mexico is seen when the news is broken to Edna over a dinner table. As she seated herself and was about to begin to eat her soup, which had been served when she entered the room, several persons informed her simultaneously that Robert was going to Mexico. She laid her spoon down and looked about her bewildered. He had been with her, reading to her all the morning, and had never even mentioned such a place as Mexico. She had not seen him during the afternoon; she had heard someone say he was at the house, upstairs with his mother.

This she had thought nothing of, though she was surprised when he did not join her later in the afternoon, when she went down to the beach. ” (Chopin, page 55) Even though Edna doesn’t spell out her exact feelings, it’s here that you can feel the desperation that takes over her when she learns of Roberts plans to depart from New Orleans. The tenderness of Robert’s character can be further analyzed as Edna’s awakening is beginning; Robert’s love for her soon brings him back to New Orleans, when he realizes he cannot live away from her.

He is hiding in a hell of shyness when he returns which is unlike him, but he does in fact, go through with actually telling Edna that he does love her but cannot act on his love because of her marriage. Robert is a practical man, knowing that it is not ethical to take Edna away from her family and husband, but practically takes the form of a masochist when proclaiming his love for her. Throughout the novel, Robert is compared to Alcee Arobin, a character well known as the town’s bad boy who has had numerous sexual encounters with other women, married or not, a comparison that Robert is not fond of.

Wayne Batten of the Southern Literary Journal, critiques this comparison in saying, “Edna, accordingly, could have learned that the fantasies she constructs with Robert Lebrun do not make his attraction fundamentally different from the unembellished lure of Arobin. ” (Batten) This is simply saying that Edna mistakenly thought of Arobin’s passion as the same as the love that Robert feels for her. Later in the story, a doctor by the name of Dr. Mandelet walks Edna home after becoming faint watching Madame Ratignolle go through her fourth round of childbirth, he suspects she has returned her attentions back to Alcee, but as the reader knows, she is about to consummate her long-incubating passion for Robert. (Batten)

Robert rejects the idea as Edna quickly tries to explain why consummating their love is not wrong because she is, in fact, her own independent woman. Robert does not have the same passion for Edna and he cannot go through with his feelings for her although his love is so powerful. She buried her face in his neck and said good bye again. Her seductive voice, together with his deep love for her, had enthralled his senses, had deprived him of every impulse but the longing to hold her and keep her. ” (Chopin, page 147) This only further proves that although he has such a commanding desire to have Edna in every way, he stands firm in his decision, seeing the impossibility in the situation. As Edna is stuck in a daydream, Robert understands their reality. Robert stands firm in that reality, trying to remain practical about the whole situation.

Finally the last we see of Robert LeBrun is in his heartfelt but remorseful flee, only leaving behind a note for Edna that simply states, “Goodbye because I love you”. (Chopin, page 152) And like a moon that never shows its face, the words are not there, but his underlying message contains his feelings for her and the reasons why he cannot act upon them. This shows a true irony as he says goodbye to her for good, a devastating farewell that sends Edna into the final stage of her “awakening” with her new found sense of independence and self expression as she gives her body to the sea, committing suicide.

Looking back over the storyline we see how significant Robert Lebrun and the way he tried to manage his desire and love for Edna had truly been to the development of both characters. Through the analysis of Robert we learn of his morals and his attempts to remain practical even though he does love Edna and it leads one to wonder if Robert had not loved Edna in the way he did, if she would have found that reckless sense of independence that eventually consumed her, or if Robert would have matured enough to recognize when to walk away from a forbidden love for the betterment of someone else.

It goes to show just how one person can awaken your soul to a new perspective and change your life entirely, whether that may be good, bad, or leave you indifferent and we see just that in the story of “The Awakening” as Edna reaches her final stages of reality and Robert brings her to that just by loving her and allowing her to be herself. 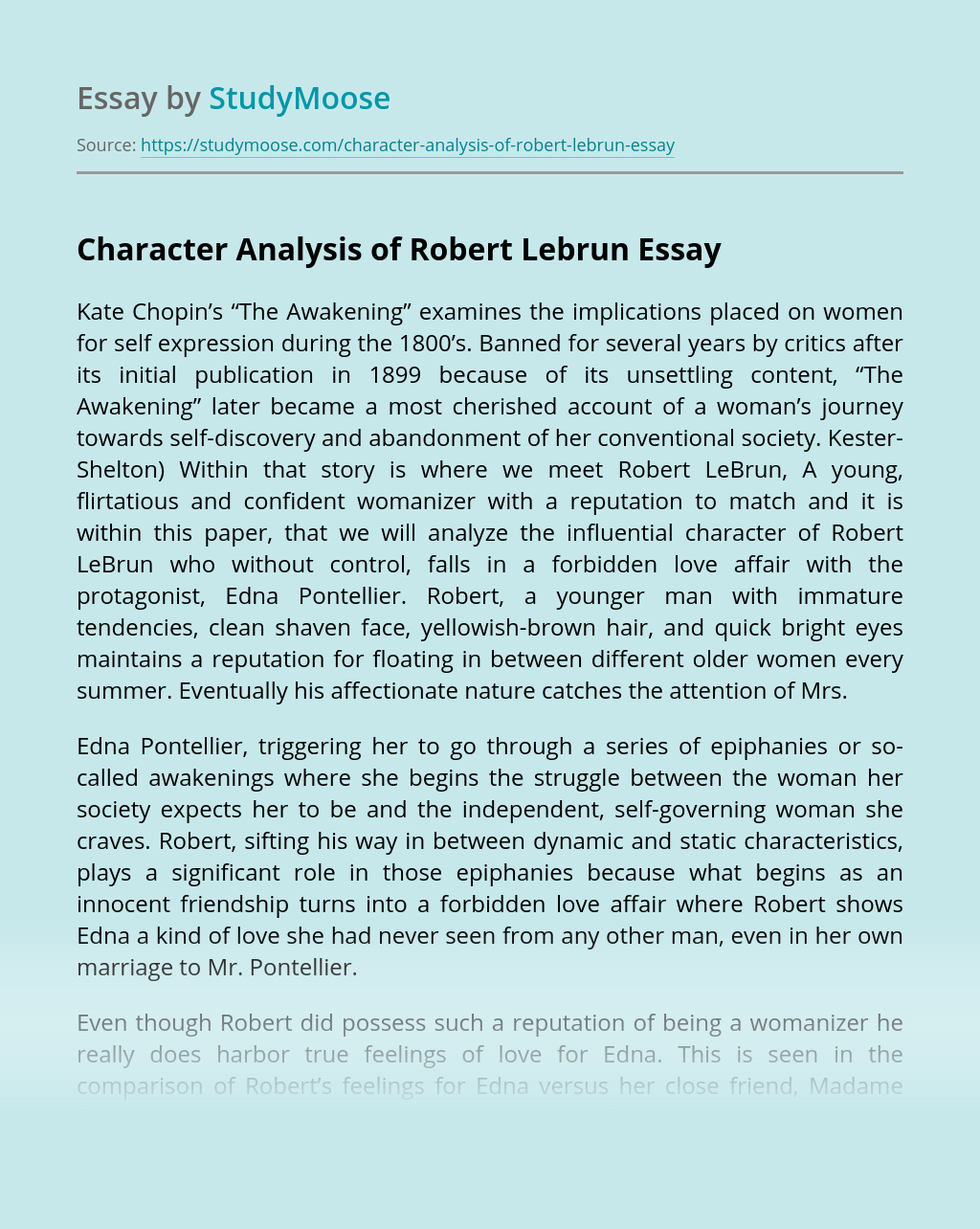