An analysis of the character of Macbeth in Shakespeare’s “Macbeth”.

Macbeth Macbeth was a true Shakespearean tragic hero. He had many noble qualities as well as several tragic flaws. He was a courageous, brave and good nobleman who was haunted by superstition, moral cowardice and an overwhelming ambition. Progressively through the play, his flaws started consuming his qualities until they are that can be seen of him. Macbeth was a courageous and strong nobleman. He and Banquo were leaders of King Duncan’s army.

Don't use plagiarized sources. Get your custom essay on
“ Character Analylis of Macbeth in Shakespeare’s Macbeth.txt ”
Get custom paper
NEW! smart matching with writer

His personal powers and strength as a general won him the battle as described by the captain (I,2, “But all’s too weak:/ For brave Macbeth well he deserved that name / Disdaining fortune, with his brandished steel,/ Which smoked with bloody execution,/ Like valor’s minion carved out his passage/ Till he faced the slave;”). Macbeth was even undiscouraged when he was attacked by the King of Norway, “assisted by that most disloyal traitor, the thane of Cawdor.

” Lady Macbeth convinced her husband to murder Duncan by putting his manhood and courage at stake (I,7, “When you durst do it, then you were a man;/ And to be more than what you were, you would be so much more the man”). As Macbeth started degrading he lost some bravery (IV, 1, “That I may tell pale-hearted fear it lies”). In his fight with Macduff, some of his old courage and strength returned. Macbeth could be brave when it came to action but when he started thinking he would hesitate and would have to be urged into action by his wife or by the sense of security that he obtained from the prophecies of the supernatural.

He changed his mind five times before murdering Duncan. The witches’ prophecy that he would be king made him decide to leave it to “chance,” but Duncan’s announcement that Malcolm was to be his heir made Macbeth realize that he would have to take a course of action for the prophecies to come true. He changed his mind again before he reached home until his wife persuaded him that it could be done safely. Then he changed his mind again before finally being forced by Lady Macbeth to make up his mind to commit the murder. Macbeth also did not fear the moral consequences of his crimes (I,7, “We’d jump the life to come”). After the murder of Duncan, Macbeth sinks into continuous moral degradation. He was in a savage frenzy when he planned the murder of Banquo and Macduff’s family. His morals sink so low that even his enemies said “Who then shall blame/ His pester’d senses to recoil and start,/ When all that is within him does condemn/ Itself for being there?” Macbeth had great ambition and wished to stand well with the world. He had absolutely no feelings for others and he only cared about what others would think of him. The witches’ prophecies only encouraged this ambition to be king. The witches who symbolized Macbeth’s evil ambitions put his thoughts into actual words. The idea of murder had already occurred to him (I,3, “great prediction/ Of noble having and of noble having and of royal hope,/ That he seems rapt withal,” “My thought, whose murder yet is but fantastical,” and I,7, “What beast wast then/ That made you break this enterprise to me?”). Macbeth himself acknowledged his “vaulting ambition” that would drive him to murder after Duncan evaded fate (I,3, “If chance will have me King, why,/ Chance may crown me”) by announcing Malcolm as his Successor. Macbeth’s powerful imagination made him already victim to superstition. His superstition was seen by his susceptibility to the witches’ influence unlike Banquo who still was not sure about their credibility. It was his superstition that made him so unquestioningly the promises of the apparitions and rest so easily assured. It was all his superstitions that made him cling to his belief in these promises when circumstances became difficult. His imagination was so strong that when it was left to roam uncontrolled his “function/ Is smother’d in surmise.” This was seen in the “dagger” scene and in the panic which Macbeth suffers after the murder of Duncan. This was also seen with Banquo’s ghost at the banquet. His ensuing excitement put him in great danger of exposing his crimes completely. Macbeth loved his wife very much. At the beginning of the play she participated avidly in his life and he informed her of everything that was going on (for example he sent her a letter telling her of the witches’ prophecies). He widely accepted her advice and ideas and they were both avid partners in the murder of Duncan. Macbeth was very affectionate with his wife and when he was speaking to her he often used words of endearment (Dearest love,” “Dearest chuck” and “Sweet remembrancer”). At the end, he was so weary from everything that was going on that when he received the news of his wife’s death he accepted it with only a yearning resignation. Macbeth’s whole story after Duncan’s murder was one of continuous character deterioration. Once he had begun his life of crime he became further and further detached from his wife to the point where she had lost all control over him. He had become so accustomed to violence that he did not hesitate at all in the planning of Banquo and Fleance’s murder (“The very firstling of my heart shall be/ The very firstling of my hand”). He even went as far as to murder Macduff’s wife and family when he knew that their death would not aid him in any way. He became so isolated, to the point where he could not trust any of the other lords (“There’s not a one of them but in this house I keep a servant fee’d”). His cruelty and treachery ended up making all of Scotland suffer (“Sighs and groans and shrieks that rend the air, are made, not mark’d”). Macbeth started as a courageous and brave general who loved his wife very much. But because of the faults that must accompany every tragic hero, he was led to his ruin by his overwhelming ambition, superstition and moral cowardice. Macbeth changed from a noble hailed as the savior of his country, a “valiant cousin,” a “worthy gentleman,” to a man of boundless cruelty. 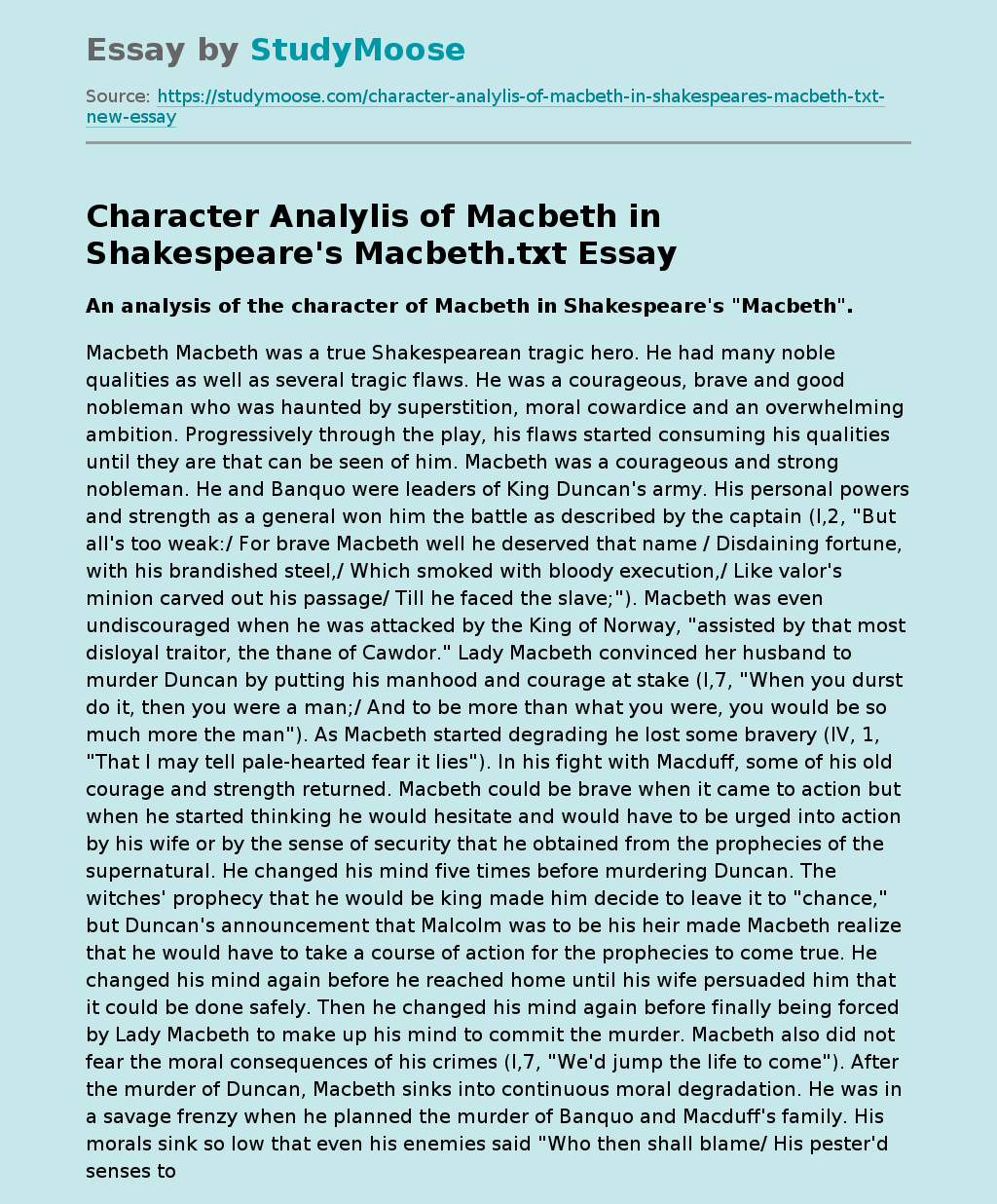