BACKGROUND AND REVIEW OF RELATED LITERATURE

Three studies have now reported results of survey data that attempt to define the scope of internet addiction disorder (IAD). These articles are available on the Web, and are all self report data from surveys. Each used a different strategy for recruiting subjects. The studies used definitions for Internet Addiction that were similar, but each used different means to analyze their results. Viktor Brenner posted a survey called the Internet Usage Survey to the web, and then advertised its existence by listing it with search engines.

Don't use plagiarized sources. Get your custom essay on
“ CHAPTER TWO BACKGROUND AND REVIEW OF RELATED LITERATUREThree ”
Get custom paper
NEW! smart matching with writer

The survey asked about on-line usage in terms of time spent on-line, and if on-line interactivity had negatively impacted one’s work or professional life. Brenner received 185 valid responses, of which two thirds were from males. Thirty-two of the questions made up what the author calls an “Internet-Related Addictive Behavior Checklist” or IRABC. Thirty percent of respondents reported a failed attempt to cut back on their Internet usage, but only 7% endorsed the item that related to “getting in to hot water” at work due to this.

The fact that 58% reported that others in their life had told them they were spending too much time on-line is significant and congruent with a well know aspect of addictive behaviors is that one’s friends and family members are often aware of the problem long before the individual involved is able to admit any troubles. Brenner notes that there appeared to be an over-representation of researchers and reporters interested in this topic that also answered the survey question.

In addition, the study population contained a large number of users that were new to the Internet. The average time on-line was 24 months, but with a standard deviation of 22 months, 24% reported being on-line less then 6 months. Most DSM-IV diagnostic criteria have a time requirement that the condition must have persisted before it can be diagnosed. The lack, in this study and others reviewed here, of differentiating the newcomers from the users with a longer history of net use, is a confound. The possibility exists that a percentage of people self-reporting as Internet addicts are actually just currently very passionate about their on-line use, and will be able to moderate it if the problems it creates for them persists. Brenner addresses some of the pros and cons of the methodology involved in Web based surveys, with the ease of subject access being the major advantage. Among the drawbacks mentioned is the need for researcher to understand the nuances of web page design (Brenner, 96).

Steve Thompson posted a survey called the “McSurvey”, composed of questions designed to determine the kinds of disruptions experienced by people that self-identified as Internet Addicts. This is a two-tiered study, and only the first part was available for review. Additional quantitative data will be forthcoming. Thompson embarked on a search for these subjects, in what he terms a “total immersion into the studied environment”. He queried various cyberspace forums where a high rate of this phenomenon could be expected, in various modalities, and got 104 valid responses. Of those, 72% reported an addiction or dependency to the Internet, and 33% stated their Internet use had negative effect on their lives. In testing to see if a perceived deficit in real life personal relations was correlated to the reporting of Internet Addiction, Thompson reports mixed results. Twenty-nine respondents in this subject pool reported that their communication skills had been “crippled”, but 36 reported an enhancement in this. Forty-seven percent reported some level of physical distress such as blurred vision or sleep disorders, or a similar somatic complaint. Thompson did not report what percent of respondents were new to the Internet, and in this initial qualitative report the data on on-line usage rates is unclear, so a complete review of this study is not possible at this time. Of notable interest are the results relating to the question about what this group thought was their primary reason for engaging in on-line activity. This was a pursuit of knowledge. It is not clear if this represents knowledge of facts or of others. Thompson concludes that Internet Addiction is a real phenomena, one deserving of study, but cautions that many people currently reporting this condition may in fact only be responding to the newness of this source of knowledge in their lives, and are so involved in learning all the benefits they can receive that they are “interpreting it all as being out of moderation when it comes to the perception of their usage.” (Thompson, 96).Oliver Egger posted a questionnaire to the Web designed to determine Internet behavior and addiction. Most of the replies came from Switzerland, 450 valid responses were received, and a throughout statistical analysis of this data was available for review. As opposed to the two previous studies reviewed here, Egger did not advertise for Internet Addicts to take his survey, but instead asked all respondents to self-identify as addicted or dependent. There were 10.6% of the respondents who endorsed this item. Egger analyzed responses based on these two groups to see what differences were significant. To a statistically significant degree, those identified as addicts reported (among other things) a greater tendency to:

1. Report negative consequences for their Internet use.

3. Feel an urge to use the net when off line.

4. Anticipate their next Internet usage.

5. Feel guilty over their Internet usage.

6. Lie to their friends about how much time they spend on-line.

7. Report that colleagues complained about their excessive Internet use.

There were no significant differences in the data on age, gender or living situation, or in how long the person had been using the Internet. Since newcomers were just as likely to endorse being addicted to or dependent on the Internet as others, it is not clear if the level of distress reported by this group is a pervasive condition or a passing phase. This data set represents a strong case for the occurrence of negative consequences for Internet addicts. Egger offers very little besides the data to indicate how one should interpret it, but this study is rich in its quantitative content. Questions were asked on a 6 or 7 point Likard scale, and published results include histograms as well as the raw data. The 450 responses were generated in only 6 weeks, as the study was announced to Internet forums such as www.news.announce, alt.irc.misc and alt.mud.misc. Links to the survey site were established and an inducement for participation was offered. Egger states that ” Since their is no particular interest group for a questionnaire like this, a competition was added to induce more people to take part in the survey.” (Egger, 96) 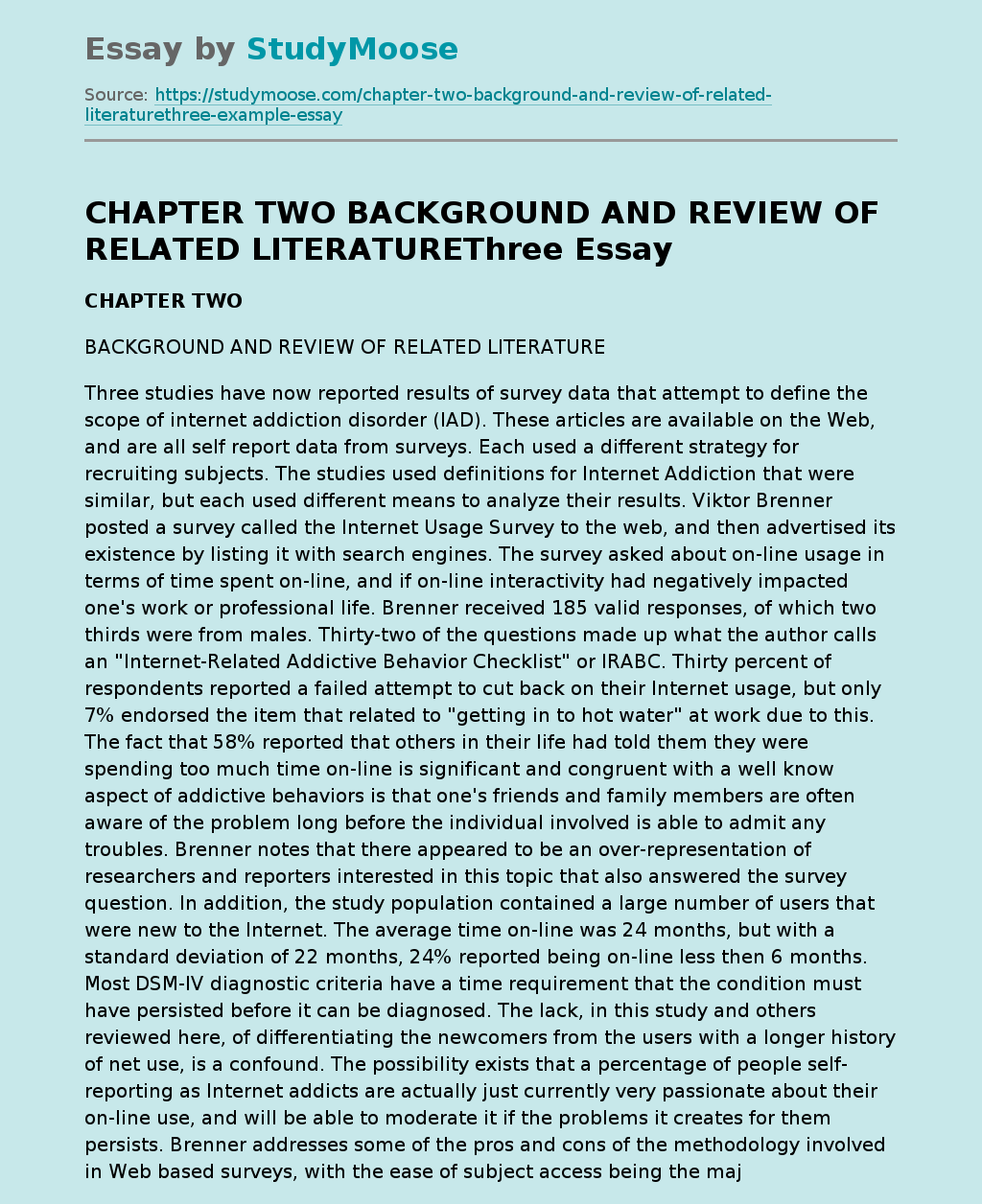