Chapter One Religions 110B

Literally, the word religion means
Connect again.
A common element often found in religions is
feelings of wonder
the prophetic orientation in religion emphasizes
beliefs and moral codes
The early anthropologist who saw religions rooted in the belief in spirits and the worship of them was
James Frazer
Sigmund Freud, when analyzing the origin of religion, emphasized
the human need for psychological security
The desciple of Freud who ultimately rebelled against him
Carl Jung
Wilhelm Schmidt, an Austrian philologist, argued that humans originally believed in
one god.
Belief in many gods
poloytheism
Belief in one god
monotheism
A mystical orientation is characterized by
the seeking of a union with something greater than oneself
A sacramental orientation is characterized by
the belief that certain rituals and ceremonies help one achieve salvation
A universal religious symbol that is circular, or blends a circle and a square, is called a
mandala
The prophetic orientation is particularly strong in
Protestant Christianity
Pantheism is the belief that
all reality is divine
One religion that particularly values and makes use of silence is
Zen Buddhism
One name of an early female deity
Astarte
In religious studies, the word “myth” means
A story that is psychologically meaningful and may be either historically true or not
Literally, “philosophy” in Greek means
love of wisdom
A Dutch Reformed Church clergyman who left his religious calling for painting
Vincent Van Gogh
Among the many reasons for religions, they exist to help people
deal with the certainty of death
Literally, psychology means
study of the soul
What psychologist saw religion as a way for people to find their fulfillment as unique individuals, a process he called “individuation”?
Carl Jung
The approach that especially makes use of reason to find answers to religious questions is
philosophy
The conception of time that emphasizes a creation and a cosmic purpose is usually
Linear
That area of investigation that looks for and interprets religious evidence in ancient sites, buildings, and objects is
Archeology
Literally, “theology” means
study of the divine
The French thinker who recognized extraordinary structural similarities in stories told by tribal peoples of the Americas was
Claud Levi-Strauss
The French thinker who sought to go behind and beyond ordinary interpretations, to in essence “deconstruct” texts and other phenomena, was
Derrida
The analytical approach that carefully investigates individual elements in cultural phenomena, rejecting the quest for universal structures that might under-gird language or religions is
Post-structuralism
The analytical approach to language, religions, and mythology that searches for universal underlying frameworks is
structuralism
the analytical approach that studies written texts of religion and even non-written material as reflections of the cultural values and assumptions that produced them is
literary theory
The German theologian who held that religions originate in human response to the mysterious side of reality was
Rudolf Otto
The American thinker who argued that religion brought a new vitality to people’s lives was
William James
The Scottish anthropologist who was the author of the multivolume study of mythology called The Golden Bough was
James Frazer
The French thinker who explored types of power in social and religious institutions and systems of thought that oppressed minority and other marginalized groups was
Foucault.
The anthropologist who lived in the Sudan among the Nuer and Azande peoples was
Evans Pritchard
The sociologist who emphasized that individual religions arise from and express the values of their societies was
Durkheim
Female imagery in religions may be seen in
Spirals and eggs
Anthropology typically studies religions as
Cultural creations with multiple aspects 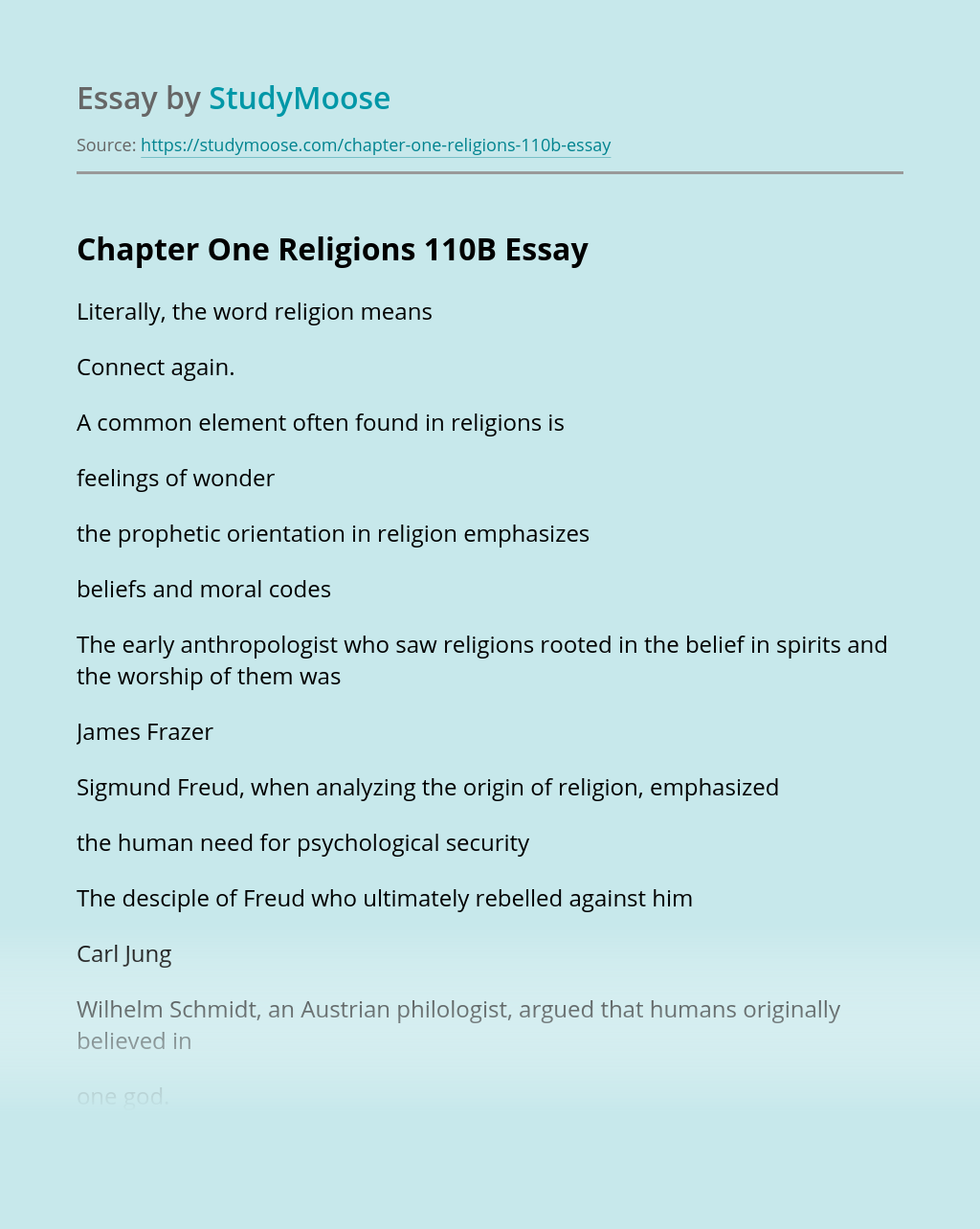 Free Will and Religion: A Nietzsche Perspective

Free will has been studied for lots of centuries and has still puzzled common individuals, lots of thinkers, scholars, theories, literary figures, and theologians worldwide. It has been puzzled with numerous aspects such as requirement or determinism from which the specific marvel whether his actions are based upon self will or driven by conditions he...

Secularisation is the process of the decline of religious beliefs. Secularization can be measured in two ways. Firstly, there is the institutional approach that deals with church attendance and the societal approach which deals with the decline of people’s beliefs. Of course which method one chooses depends on how you define religion. Some sociologists such...

There are many factors that triggered the religious revivals known as the Great Awakenings. These awakenings encouraged citizens to partake in religious ceremonies and activities. Some agreed and joined the bandwagon, some refused. The awakenings had aspects that resulted in great long term benefits in government, education, and society. During the 1730s it was apparent...

Colonization of America by Bradford and Winthrop