Chapter 4 Question 2Global climate change remains one of the

Global climate change remains one of the biggest environmental threats to human welfare over the coming century (citation). Climate change is expected to significantly increase average temperatures and alter the amount of precipitation worldwide. Malaria is caused by a specific protozoan of the genus Plasmodium and is transmitted by certain mosquito species. The pathogen itself and the mosquito reproduction cycles are high temperatures sensitive, with the temperature optimum for transmission is around thirty degrees Celsius and climate alterations towards or away from this optimum can significantly influence the epidemiological situation.

Don't use plagiarized sources. Get your custom essay on
“ Chapter 4 Question 2Global climate change remains one of the ”
Get custom paper
NEW! smart matching with writer

A retrospective cohort study, cross-sectional, case-control or ecological study design could be used to determine whether climate change has resulted in more malaria in specific geographic areas. These studies examine the correlation between some specific exposure and disease rates, at the level of groups rather than individuals. For example, one can correlate malaria and dengue fever rates in countries around the world with a degree of global warming changing (increased global temperature.

It may or may not be too soon to do a study depending on the type of study that is being conducted. For example, if you are conducting a retrospective cohort study it would not be too soon; however, if you are conducting a prospective cohort study it may be too soon. You would want to know the type of mosquito being researched, pesticide use, temperatures/weather changes, the history of malaria in the target areas or communities, water and where the mosquitos live.

I do feel as though the finding that women of higher socioeconomic status are at greater risk of developing breast cancer is due to confounding.

For instance, in comparison to women of lower socioeconomic status, women of higher socioeconomic status are more likely to engage in confounding variables such as drinking alcohol, take oral contraceptives, have their first child late in life, have fewer children and use hormone replacement therapy with each increasing the risk of developing breast cancer. When creating our inclusion criteria we could look at age or stratify by socioeconomic status. If you were doing a case-control study you could match age, the number of kids or access to healthcare.

A geographic information system or GIS is a query based management system that aids in capturing, analyzing and present spatial information on a map. Spatial analysis is used to apply the science of where, to ask questions, solve problems and make smarter decisions using geography.

Geographic information systems would provide the ability to analyze the spatial relationships of accidental release of toxic agents into a stream relative to a wide range of social, political and environmental data, including human populations and other organisms which may be exposed to toxic substances as a result of these releases. According to the text, responders need to know, where the exposure of interest and population at risk are. Researchers might ask are health outcomes clustered in space, where are exposures the highest, or are there any associations between exposure, demographics and health outcomes? Questions that various GSI operations may answer include but are not limited to: where the release was? Which way was the wind blowing? Who lives in the exposed area? How can responders best reach the spill site? Can the spill be contained? Etc.

In the first case, data layers needed would include the base map, topography, and wetlands to analyze the spread of toxic agents, zoning to see what cities, towns are going to be affected and who is going to close to those water sources.

In the second case, geographic information systems in combination with spatial analysis can be used to analyze and manage vector-borne diseases such as West Nile. The use of GIS can identify areas favorable to the breeding of mosquito vectors and access the risk of this disease to a local population which in turn will map an area the mosquito spraying program can target to control the spread of West Nile virus. Data layers needed would include a land cover (how far is the spay getting?), wetlands, base, demographic (where our nursing homes are or where do we need to start spraying?), zoning (where are our most highly populated areas) and lastly demographics.

Layers needed for the third case would include demographics (those with and without cancer when comparing the two groups) zoning, topography, wetlands, imagery (to see what the built environment looks like around the population of interest.

Lastly, where it comes to looking at community patterns we would want to use base map layer, parcels, streets, demographic to determine where they are planning on building communities, lane blockages in terms of construction, development (showing traffic patterns through the area).

Chapter 4 Question 2Global climate change remains one of the. (2019, Dec 06). Retrieved from https://studymoose.com/chapter-4-question-2global-climate-change-remains-one-of-the-example-essay 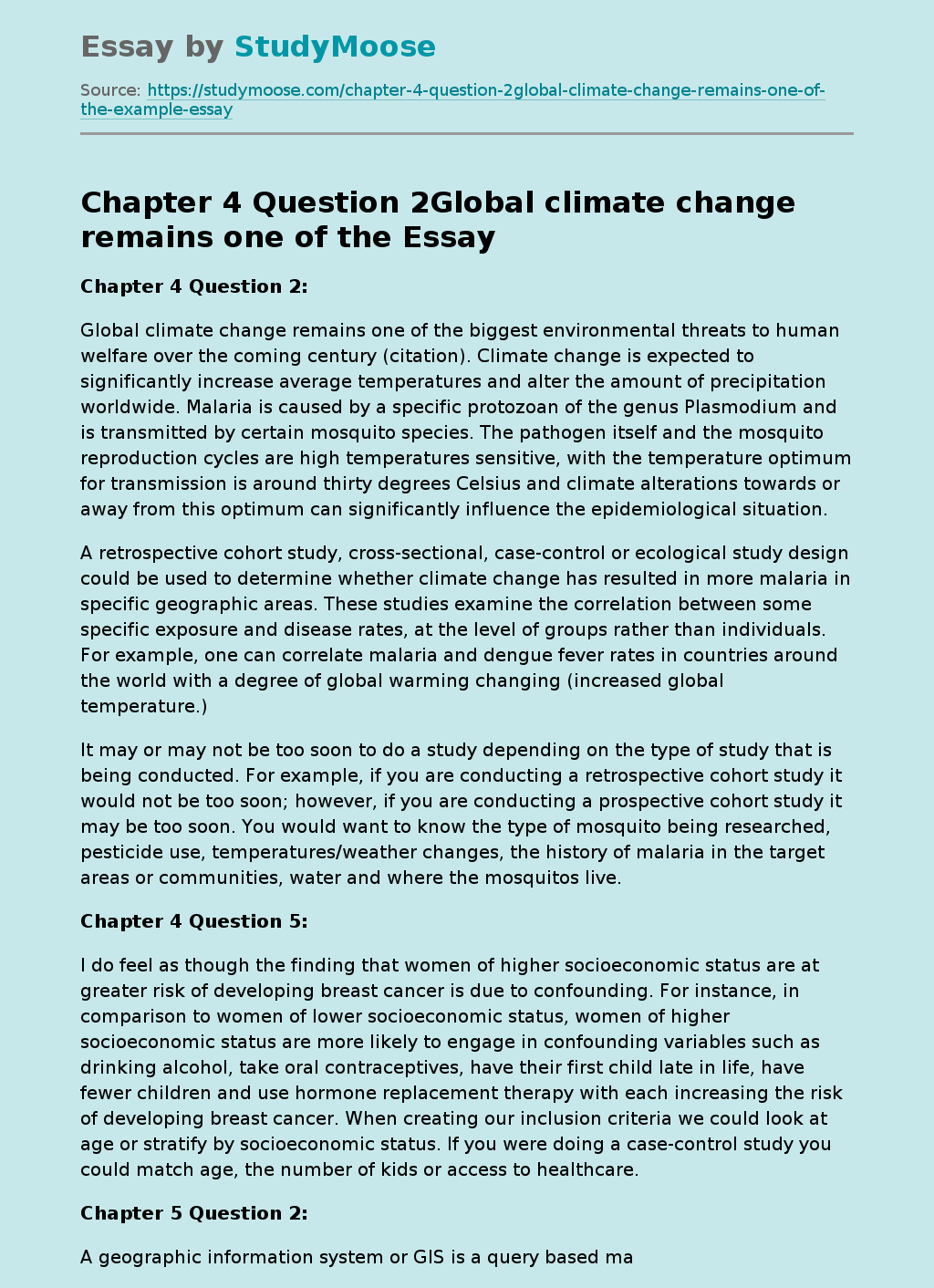