Chapter 29, Civil Rights, Vietnam, and the Ordeal of Liberalism

Categories: Civil RightsCivil Rights MovementLiberalismVietnam War
Download paper
Download
Essay, Pages 4 (928 words)
Views
230
One of the chief obstacles in John Kennedy’s presidential bid in 1960 was his
religion
In the 1960 presidential election results
none of these answers are correct
In 1961, President John Kennedy saw most of his legislative success in he area of
tariff reductions
Regarding the assassination of President John Kennedy
Lee Harvey Oswald was shot and killed while still in custody
The Warren commission investigation of the assassination of President John Kennedy concluded
Lee Harvey Oswald acted alone
Lyndon Johnson was similar to John Kennedy in his use of
active use of power
The 1964 election saw
Lyndon Johnson receive a larger plurality than any other candidate before or since
In 1965, President Lyndon Johnson’s Medicare program
was similar in design to the social security system
Only weeks after taking office, President Lyndon Johnson declared war on
poverty
The Johnson’s administration’s Office of Economic Opportunity
included a controversial community action program
The Housing Act of 1961 provided federal finds for all of the following except
the construction of low income public housing
The Elementary and Secondary Education Act of 1965
All of these answers are correct
The Immigration Act of 1965
eliminated rules that gave preference to immigrants from Northern Europe
Great Society reforms
contributed to the greatest reduction in poverty in American history
In February 1960, the “first sit in” demonstration protesting segregation was held at a
lunch counter
In the early 1960’s the primary membership of the SNCC
was college students
In 1961, the “freedom riders” sponsored by CORE attempted to
force desegregation of bus stations
In 1963, civil rights activist Medgar Evers was murdered the same day
George Wallace tried to prevent black students from enrolling in the University of Alabama
Martin Luther King’s “I have a dream” speech
was given during the largest civil rights demonstration in the nations history to that point
Legislation to prohibit segregation in all public accommodations was proposed
by Kennedy and approved by the Johnson administration
The 1964 murder of civil rights activist Andrew Goodman, Michael Schwerner and James Chaney
implicated local law enforcement officials in the crime
All of he following was a part of the 1965 civil rights march in Selma, Alabama except
the resignation of governor George Wallace
The Civil Rights Act of 1965 primarily focused on the issue of
voting rights
In 1965, the first major race riot in the US since World War II took place in
Los Angeles
In the summer of 1967, racial conflicts in the United States
None of these answers are correct
In the 1960’s, the philosophy “Black Power”
called for an increased awareness of racial differences
In 1965, Malcolm X
belonged to the Nation of Islam for a time
In 1961, President John Kennedy believed the major struggle against communism in the future would be waged in
the Third World
All of the following actions were initiated by President John Kennedy except
the CIA plan to overthrow Fidel Castro
During the Bay of Pigs operation, President John Kennedy decided to withhold
military air support
The 1961 Vienna summit between the United States and the Soviet Union
saw Soviet Premier Nakita Khrushchev make a veiled threat of war
The 1962 Cuban Missile crisis saw the
Unite States order a navel and air blockade of Cuba
The Cuban missile crisis ended after President Kennedy agreed to
not invade Cuba
The correct chronological order for the following events is
Bay of Pigs, Vienna summit, Berlin Wall, Cuban Missile Crisis
In 1961, President Lyndon Johnson’s first major foreign policy test came during a crisis in
the Dominican Republic
George Kennan stated the “most disastrous” undertaking in the United States involved
Vietnam
Under the terms of the 1954 Geneva Conference accords, Vietnam was
to hold elections in 1956
In 1956, the United States interest in Vietnam were cancelled because
A pro Western government in South Korea refused to hold them
In 1956, the United States interest in South Vietnam
had made the country a recipient of large amounts of American aid
The National Liberation Front was
also known in the United States as Viet Cong
In 1963, the overthrow of South Vietnamese President Ngo Dinh Diem
was supported by the Kennedy administration
At the the beginning of 1964, the Lyndon Johnson administration
inherited a substantial American commitment to maintain South Vietnam
The 1964 Gulf of Tonkin Resolution was in response to
alleged attacks by North Vietnamese torpedo boats on American destroyers
The Gulf of Tonkin Resolution
gave President Lyndon Johnson wide latitude to escalate the conflict
In 1965, President Lyndon Johnson responded to an attack on Pleiku by
by bombing North Vietnam
In 1967, the number of American troops in Vietnam had surpassed
500,000
In Vietnam, the American military “attrition” strategy
None of these answers are correct
In the Vietnam War, the “Ho Chi Minh Trial” was
continually moved by the North Vietnamese
In Vietnam, the American “pacification” strategy
was replaced by more heavy handed “relocation” strategy
In January 1966, highly publicized hearing airing criticisms of the war were staged by
Senator William Fulbright
In 1967, President Lyndon Johnson responded to the mounting inflation at home by
raising the Federal Reserve Interest rate
All of the following statements regarding the 1968 Tet offensive are true except
It saw Saigon fall to the communists
The 1968 Tet Offensive
All of these answers are correct
The 1968 Democratic candidate for president was
Hubert Humphrey
The assassin of Robert Kennedy had been angered by Kennedy’s
statements in favor of Israel
In 1968, anti war protestors at the Democratic convention in Chicago
were attacked by police in a bloody riot
In 1968, George Wallace ran for president
based on a variety of conservative grievances
In the 1968 presidential campaign, Richard Nixon called for
stability and national law and order
The 1968 presidential election results were
extremely close

Chapter 29, Civil Rights, Vietnam, and the Ordeal of Liberalism. (2018, Jan 05). Retrieved from http://studymoose.com/chapter-29-civil-rights-vietnam-and-the-ordeal-of-liberalism-essay 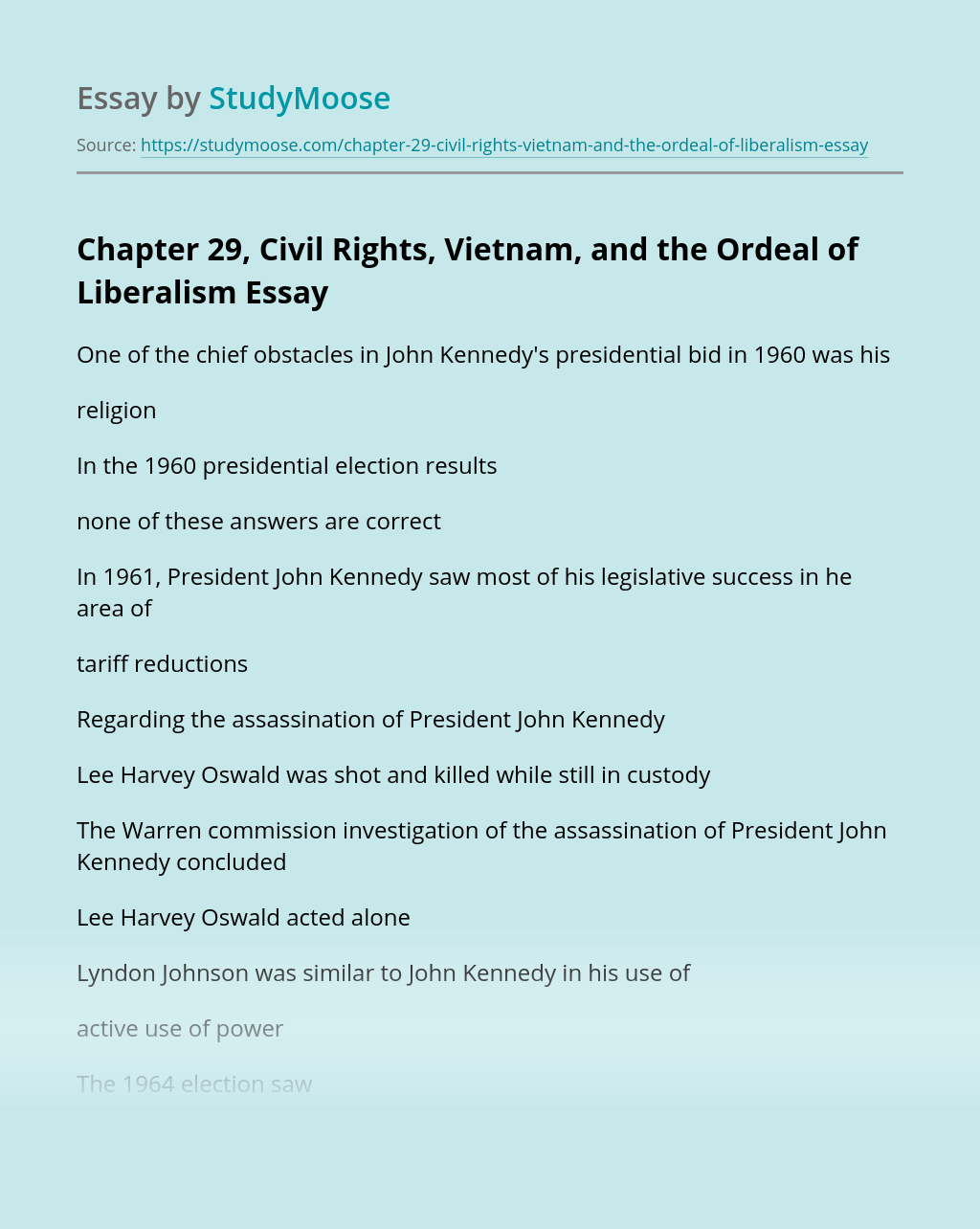 Don’t waste time
Get a verified writer to help you with Chapter 29, Civil Rights, Vietnam, and the Ordeal of Liberalism
Hire verified writer
$35.80 for a 2-page paper
Stay Safe, Stay Original