Don't use plagiarized sources. Get your custom essay on
“ CHAPTER 1ACKNOWLEDGEMENTWe take great pleasure in expressing my deep sense of gratitude ”
Get custom paper
NEW! smart matching with writer

P) for his benevolence, co-operation and constructive criticism, interest and inspiration given to us through the entire period of our association with them.We would like to express our special appreciation to institution and DR. R.K. PANDIT,Director, MADHAV INSTITUTE OF TECHNOLOGY & SCIENCE, GWALIOR (M.P).Lastly, but certainly not the least we would like to thank all those who helped us during different stages of completion of thesis of this project.

CHAPTER 2ABSTRACTThe basic idea behind making of this project is to analyse the different components of a hydro-power plant. The description of working of the plant with some specifications of various elements of the plant. The major project contains an elaborated view on the modelling of hydropower plant. First of all, a background check is done on every single component required to design full and comprehensive model of hydropower plant consisting penstock, governor, turbine and generator. The analysis of existing models begun with simple analytical models which were followed by specific system modelling.

The complexity in designing the aspect of water which is dynamic flows through the penstock and the opening and closing of wicket gate resulted in the formation of complex control systems to model hydropower plant. Those compound models were more of systems rather being analytical. They are mostly endowed with many feedback and modern control networks such as fuzzy logic and PID control logic which assist in improving the performances. These models are often fabricated and simulated using software of which MATLAB is a fundamental one. Along with this, the project probes the simulation of hydropower plant consisting a model of hydraulic turbine, turbine governor and synchronous machine, all of which are simulated using MATLAB software. A 3 phase to ground fault is introduced in the model to be simulated at t = 0.2s and removed after t = 0.4s and this lets us acknowledge that the initialised voltage quick to regain its steady state stability because of high excitation voltage that was sustained by the proportional integrated differential control system incorporated in the hydraulic turbine structural design. The tempo of the motor also reincorporated stability but this case was far slower than the voltage one. Simulation results depict that a perfect generation of energy from hydropower plant is evolving that was robust enough to resist all kinds of faults.CHAPTER 3INTRODUCTIONWe begin by making the Hydropower plant convert the potential energy from the water head into mechanical energy with the help of a hydraulic turbine. The hydro-turbines are now connected to a generator which converts the mechanical energy to electric energy. The main components of a hydropower plant are illustrated in figure 1. Generator, a turbine, a penstock and the wicket gates are the most essential components of the hydropower plant. In general, there are two types of turbines are used, first the impulse turbine for instance Pelton Wheel turbine and second reaction turbine like Francis and Kaplan turbine. Mostly the generator and turbine are adjunct directly by a vertical shaft. The advantage of high head is that it produces fast flowing water that flows from the penstock and then arrives to the turbine. The wicket gates are responsible for controlling and harnessing the flow of water. Wicket gates are to be adjusted together in respect of opening and closing of pivot around the periphery element of the turbine to harness the quantity of water flow into the turbine. Servo-actuators, controlled by the governor are a helping aid in adjusting these gates.Fig 1: Components of a Hydropower plantThe water drives the turbine-generator set and the electricity is produced by the rotating generator. In the beginning, the water is stored with clear hydraulic head, and it possesses some amount of potential energy. As it flows through the penstock little by little it loses its potential energy and gains kinetic energy just in time before reaching the turbine. An intuitive look at the process of energy generation by hydropower plant show that the hydropower plant models are highly impacted by the penstock-turbine system, the electric generator and numerous control systems. In this project, the simulation performed also provides us with influential results on future building of hydropower plants. The viewer can take inspiration and develop their own prototype and modify it for the greater good.CHAPTER 4COMPONENTS OF HYDROPOWER PLANTDam and Reservoir: The dam is built on an oversized stream in craggy areas to confirm sufficient water storage at height.The dam forms a large reservoir behind it.The height of water level (called as water head) within the reservoir determines what proportion of P.E. is keep in it.Control Gate: Water from the reservoir is allowed to flow through the penstock to the rotary engine.The amount of water that is to be free within the penstock will be controlled by an effect gate. When the management gate is absolutely opened, maximum amount of water is released through the penstock.Penstock: A penstock could be a large steel pipe that carries water from the reservoir to the rotary engine. Potential energy of the water is regenerate into K.E. because it flows down through the penstock thanks to gravity.Water Turbine: Water from the penstock is taken into the water rotary engine. The rotary engine is automatically coupled to an electrical generator. Kinetic energy of the water drives the rotary engine and consequently the generator gets driven. There ar 2 main sorts of water turbine; (i) turbine and (ii) turbine.Impulse turbines ar used for giant heads and reaction turbines ar used for low and medium heads.Generator: A generator is mounted within the power house and it’s automatically coupled to the rotary engine shaft. When the rotary engine blades ar revolved, it drives the generator and electricity is generated that is then stepped up with the assistance of a electrical device for the transmission purpose.Surge Tank: Surge tanks are usually provided in high or medium head power plants when considerably long penstock is required. A surge tank could be a tiny reservoir or tank that is open at the highest. It is fitted between the reservoir and the power house. The water level within the surge tank rises or falls to scale back the pressure swings within the penstock 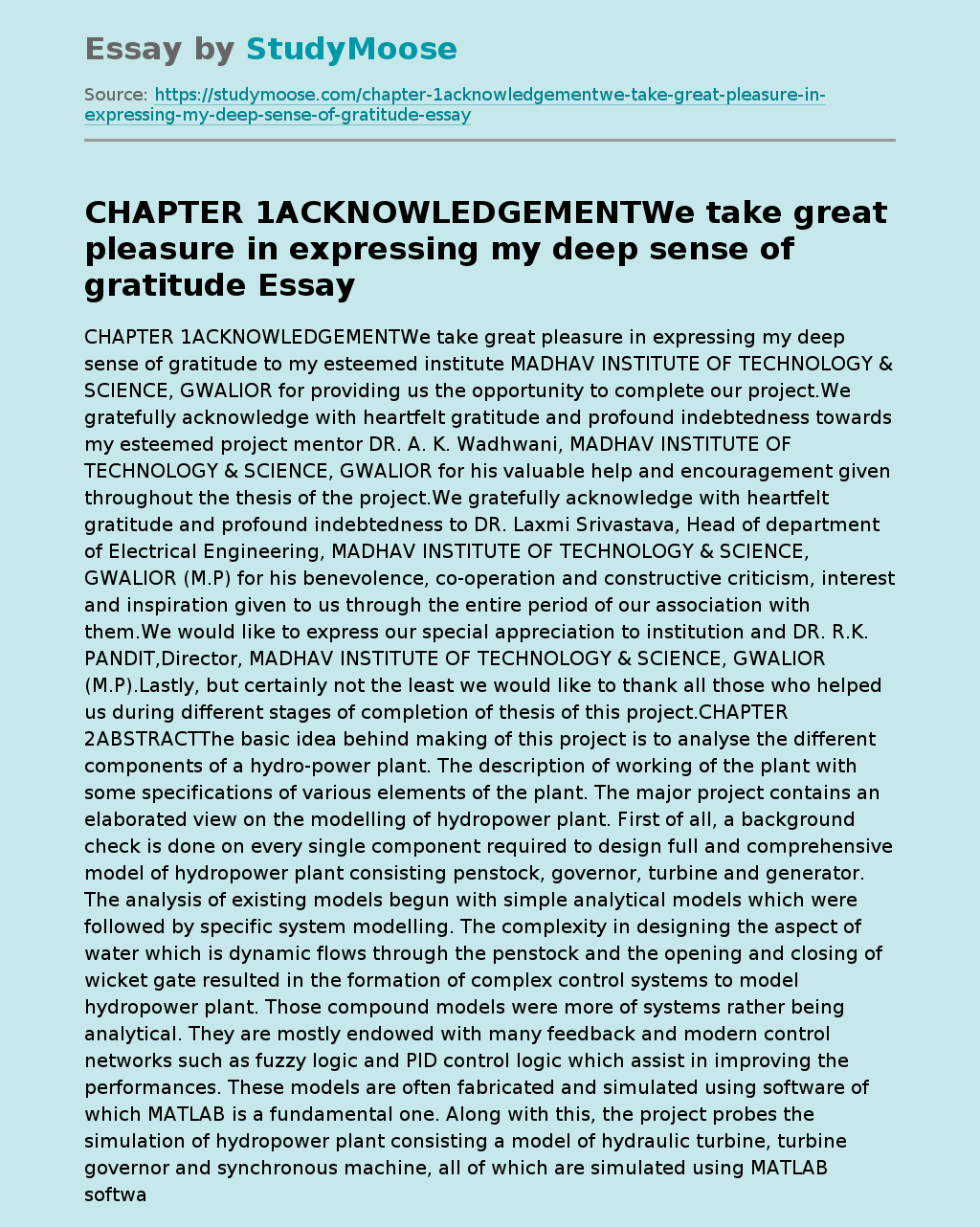